Some music as this is going to be a moment.... 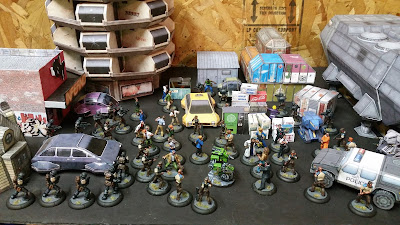 I wasn't entirely sure I was going to make it with these as there was quite a few and I hadn't even blocked in any colours while working on the other stuff. These ladies and gents are needed for Adepticon. I dove into the pile yesterday morning and and laid down my brushes around 0330.

Today has been errands and adult responsibilities, also checking on the kids' work. They still aren't ready, but assure me they will have something tomorrow night after I get home from work. 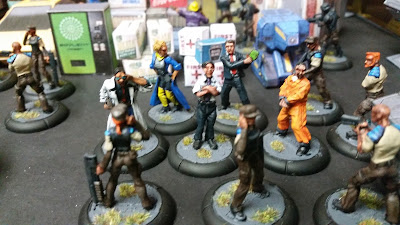 Above are the civilians from MERCS Recon. These particular ones are mission specific ones. They either give information or are the mission objective. I particularly like the executive with his smart pad, the leer of the prisoner, and the mid management fellow with his arms crossed. I can almost imagine the fellow telling the MERC team that the building is a gun-free zone, or they are making too much noise! ;) 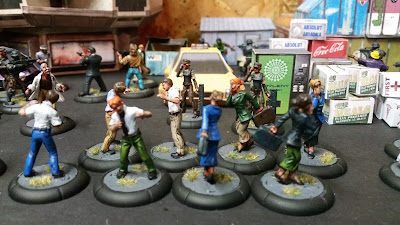 8 models of  men and women acting as expected in a hostile action. These are the more common encounter and are more hindrance than aid. The security level climbs as workers escape, are killed, or the building is damaged. 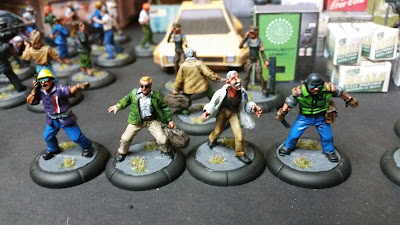 An Engineer, executives, scientist, and an technician. These are also objectives or have intel the MERCS need 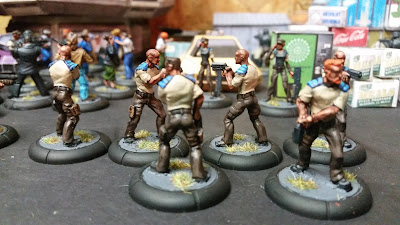 When the MERCS first enter the floor they have a scanner that reveals heat signatures and heartbeats, but they need the MK 1 eyeball to tell who is who. PEF tokens are moved on the board and revealed if in LOS to the MERC. Security force members are hidden in the bunch. These fellows have no armour and only carry pistols. I painted up six, but they don't last long once revealed. 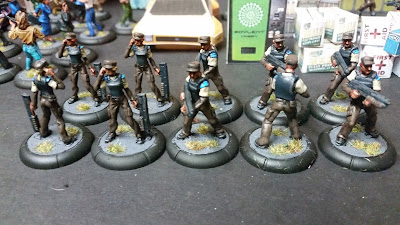 Security Force 2 members are starting to appear, These folks have armour and shotguns and really start to slow down the MERCS. Three of them can take down a MERC. 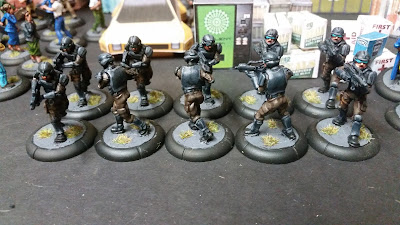 Security force 3 start to arrive . They had to put on body armour and grab assault rifles so it took them a moment. When they appear it is a good indicator to the MERCS that it is time to go! 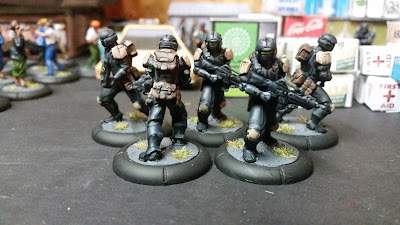 Security Force 4 are bad news for the MERCS. Employees have been killed, the building is on fire, and the MERCS are down a few members as the waves of security forces have been wearing them down. These fellows are wearing power armour and equipped similar to MERCS. Since the MERCS are down a few members when these fellows arrive, 5 is more than sufficient. These were kickstarter exclusive. in the game you just use MERC models from an opposing force to represent SEC 4 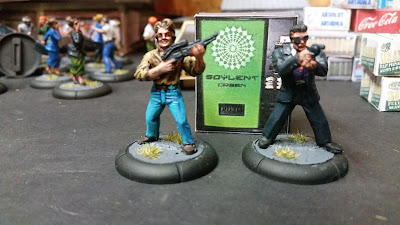 Salsa and Pesos (Tango and Cash) they are another Kickstarter exclusive and can appear with Security Force 2. They are a nice device to increase the difficulty of the mission. 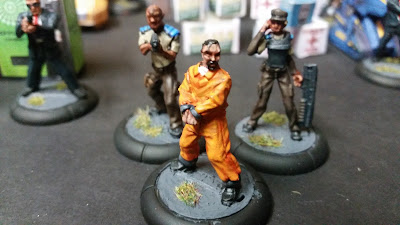 I've been looking for CoBs (civilians on the battlefield) for awhile with only a few robots and mechanics collected. These have greatly enhanced what I have and I can see the security force as good stand ins for law enforcement. I'm rather keen on the objectives and challenges that they can bring to enhance a small skirmish of two squads. They will also be a great campaign story device too.

Although my gaming group is huge into 40k and not so much into history or any non-40k skirmish. I think a Bladerunner/5th Element style skirmish may draw them in. 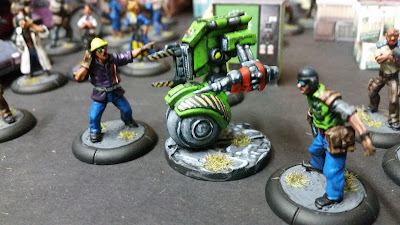 And just think of the fun with this guy! He was an extra from the kickstarter and is meant for the MYTH dungeon crawl. In MERCS he is the objective or a hindrance for the MERCS. 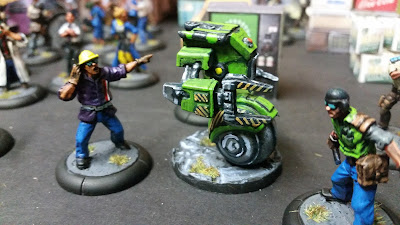 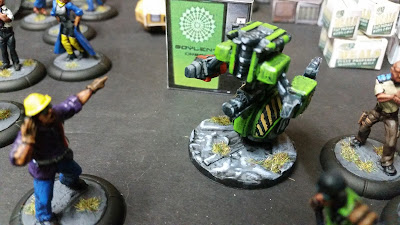 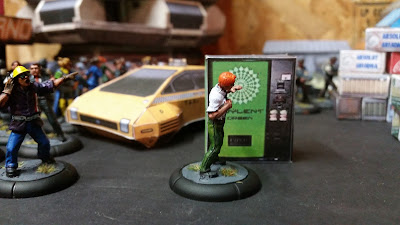 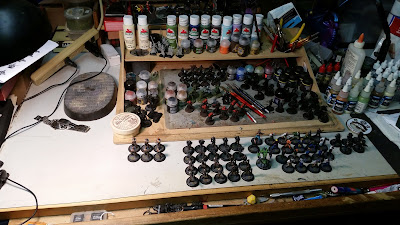 My desk is a lot less busy now. I still have a lot that didn't get painted due to unexpected issues. I have Commissar Yarrick and some scifi troops started, but I didn't get home soon enough to complete them, so they will wait till later. I have to get some shut eye as I have a 12 hour shift starting in the early AM.

It has been wonderful fun once again to get some hobby time in. I appreciate greatly the company that I was able to share with and all the great eyecandy the challenge provided. Thank you again, Curt for putting the Challenge together... and to Lady Sarah for allowing the time to play!

...and parting paint grenade is nonchalantly tossed over his shoulder as he leaves the room... :)

Fantastic work David. I love the various civilians you've gathered here. As you say, you really need lots of these types for any modern urban setting. I'd be the idiot in the suit, carrying a coffee, earbuds on, trying to ignore the disaster unfolding around him. The groovy green robot also gets a vote from me. In the dystopian future of MERC it's probably been designed as a dental assistant, with tools to suit the trade. Great stuff, all.

David, whenever I read about your life in the military, your very active family AND your expansive dedication to your hobby, I shake my head in wonder: How do you find the energy!? It's both amazing and wondrous.

Thanks very much for joining us again this year, David, and thanks again for taking on the Thursday Minion mantle. You did a terrific job and even survived your tour of duty with the Challenge Spreadsheet. Bravo and see you for the next one.