From BrendonW - Romans & Wars of the Roses Banner Bearers (83 Points)

In our household we are getting some work done that is likely to disrupt the painting flow. But before that starts I managed to get some more 28mm dudes completed. First some Early Imperial Romans from Warlord Games. 4 Legionaries and 5 Auxiliary oval shield fighters. They have some multi-basing happening to help them rank up into a tight unit. They have nice animated poses but it will cause ranking up issues if I don't consider this in a unit formation. One auxiliary I cut his arm and repositioned it to point upwards to try and help the ranking up. All shields have decals. The Oval ones come on a clear background while the rectangle ones are fully coloured.

Next is more Banners for my growing Perry War of the Roses collection. 7 Plastic 28mm fellas. 3 flags I designed, 2 trumpet blowers, 1 fancy jacket fella and 1 with a big spear. Sorbitium Fermentum (Drink Beer) and Manducate Lardum (Eat Bacon) is the inscription and possibly the solemn vowel these warriors take.  These are probably the last of the banners on foot. I hope to get one more in the force but a mounted standard. Not the best photography but you get the idea. Cheers

From Curt:Argh! Romans with proper shield adornments! I shake my fist and curse you, sir. :) Seriously, excellent work Brendon. The Romans look marvelous and your Wars of the Roses project continues to sap my will. Again, I love your Bacon & Beer banners - not much better things to rally behind, I think. I look forward to seeing your upcoming mounted figures for this project.

(From Curt: I'm going to start some of the Monday entries early as it looks like I'll have my work cut out for me tomorrow.)

Here are another 15 Black Tree Design Saracens. As always, shields are hand painted in order not to displease Odin. I'd be repeating myself if I went on about how nice these figures are, so just enjoy the photos. 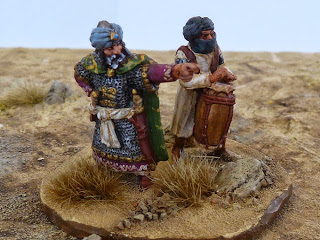 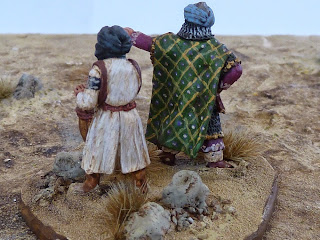 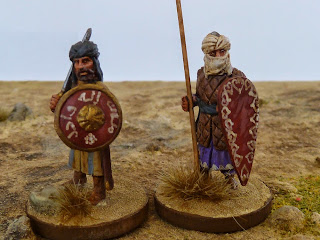 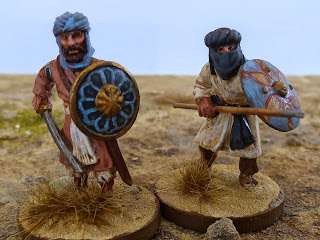 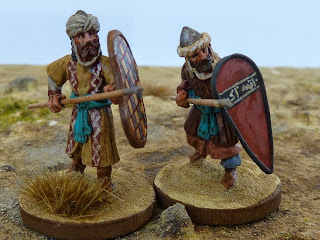 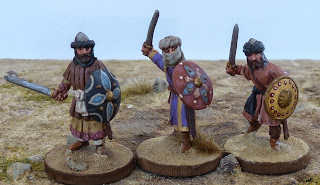 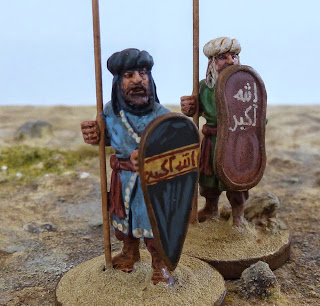 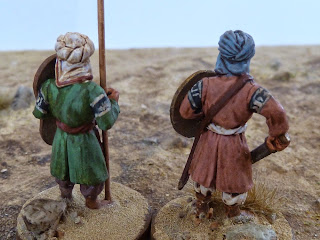 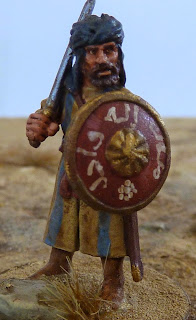 These should give me a base of 75 points. Huzzah!


From Curt:Wow! Here we go again with these gorgeous freakin' hand-painted shields! Alan, amazing work AND you show off even more with these wonderfully detailed patterns on the cloaks and jerkins. This is turning out to be a very, very enviable force. Top drawer stuff here. I'm going to add another 15 points for this visual treat of this fine detail brushwork. Well done Alan!

In response to Miles’ request to provide pictures of our various hobby spaces here is a shot of my nerve center (or is that 'nerd center'?). 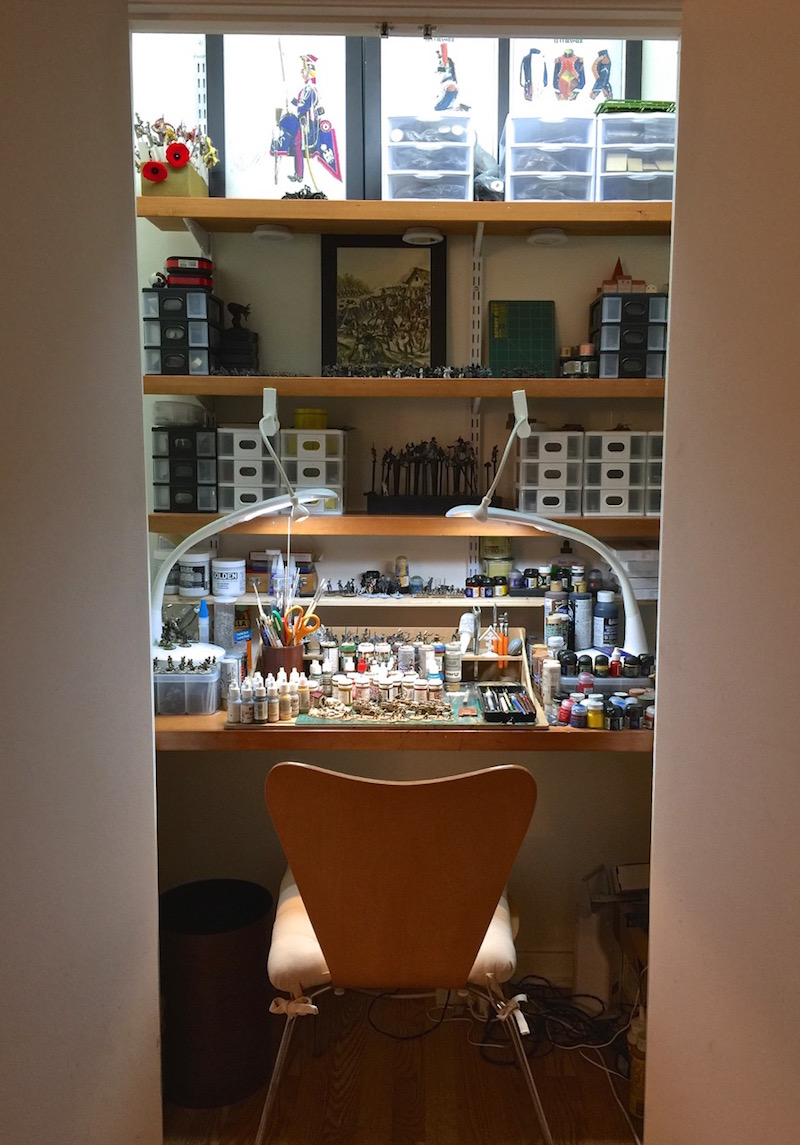 Yes folks, it’s literally a closet, so no snarky remarks… :) Both my wife and I are pretty draconian about having a fairly minimalist household (I should’ve prefaced this by saying we have no kids). We try to keep things pretty spartan around the place, but our book collection and my hobby stuff frequently pose a challenge. So I created this ‘hobby closet’ in our media room in order for me to keep my hobby rig set-up while still having the ability to close the doors in order to keep the room looking neat and tidy.

I know, it's a little OCD, but I'm okay with it (rocks back and forth).

Anyway, I’ve got about half a dozen hobby projects all on the go right now, which I must say is making me a little mental. Most of them are waiting for ‘that one essential thing’, a decal, a flag or some other infuriating detail that I’ve convinced myself that I absolutely need to properly wrap them up. Now, if I can get some of this stuff wrangled I should be able to get back on track towards my points target but right now it's pretty much a complete gong show.

Nonetheless, from all this chaos, I’ve actually managed to finish something to the point that I can submit it!  Woohoo!!

Continuing on from my Tachanka, this is another entry which focuses on the Russian Civil War. 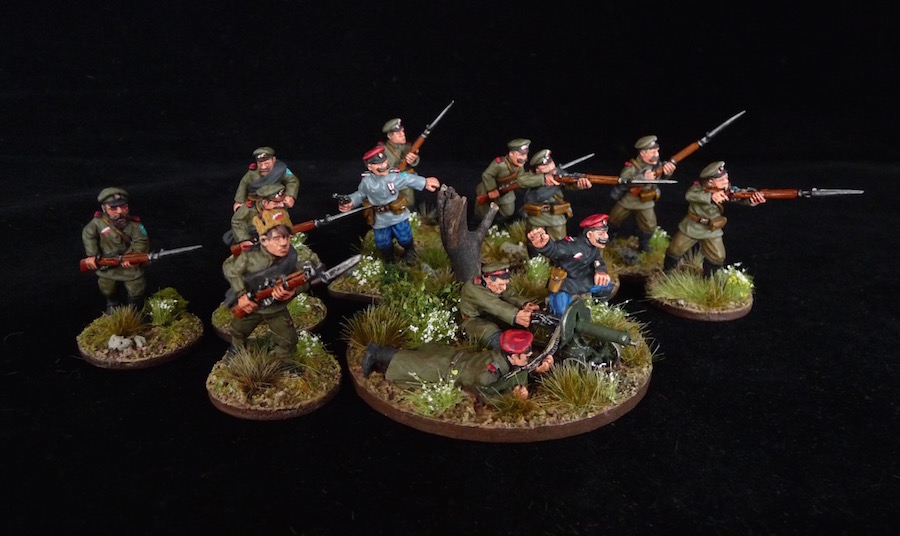 I find this period of history fascinating as there were so many personalities and groups involved in the conflict. Russians, Latvians, Finns, Poles, Ukrainians, the list goes on and on. This submission is about a small portion of the Czechoslovakians who fought in Russia during the Civil War.

I was quite close to my grandparents on my mom’s side. Granma's family was Austrian and Grampa was from the outskirts Prague. Gramps, while being a fervent new Canadian was also very proud of 'The Old Country' and took great delight in telling me stories of Jan Hus and his Hussites, and of the ‘Czech Legion’ which fought the Reds and helped to secure Czechoslovakian independence. When he told me about the Czech armoured trains and the fact that the Legion itself controlled thousands of miles of Russian railways I was a little dubious, thinking he was pulling my leg. Later on, when I was in university, I read more about the Czech Legion and discovered that truth is indeed sometimes stranger than fiction. 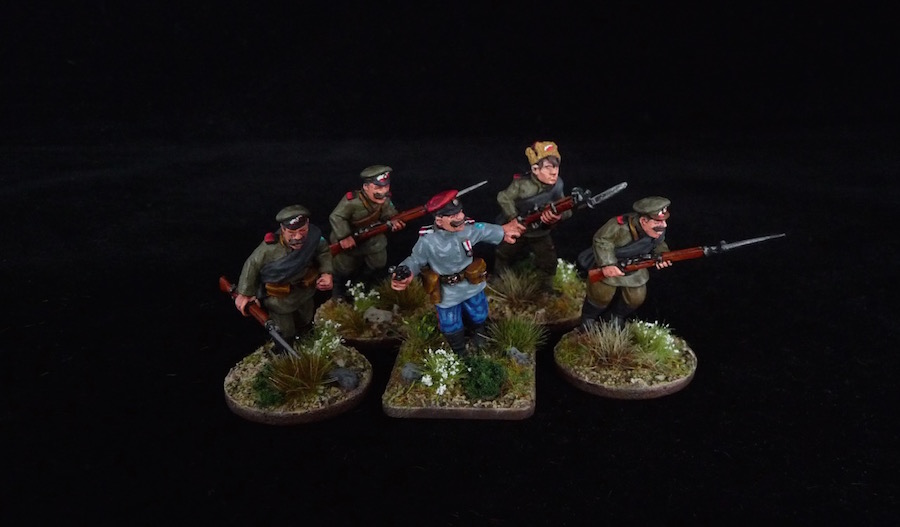 This squad represents some of the Czechoslovaks who volunteered to serve with General Lavr Kornilov’s forces. They became part of the famous (or infamous) Kornilov Shock Regiment which was considered very dependable amongst the White forces and was composed of some pretty hard, hard men. Suffice it to say that not many of these guys survived the Civil War but apparently a few made it back to the new state of Czechoslovakia and probably had some harrowing tales to tell I’m sure. 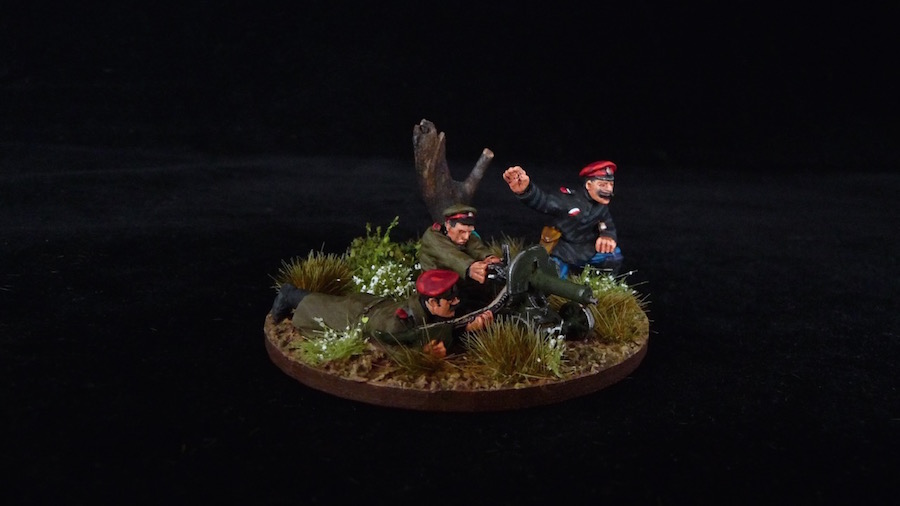 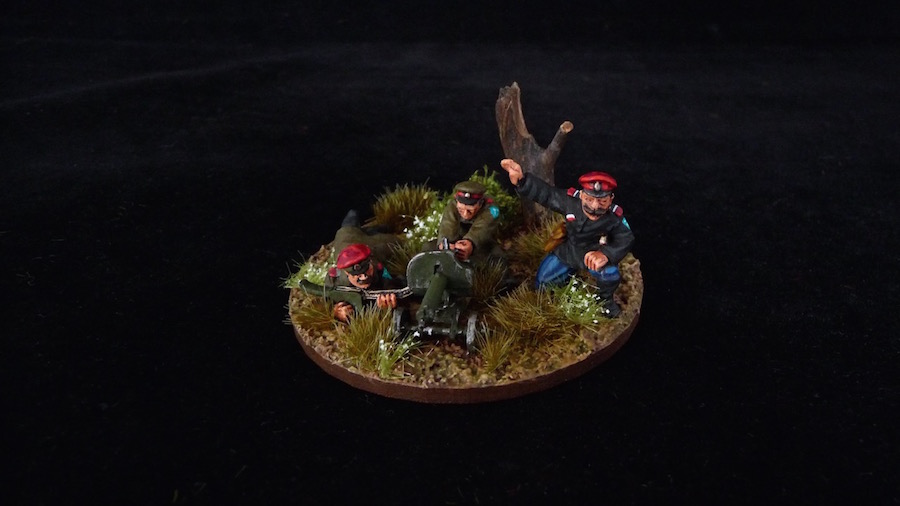 These models are almost all from Footsore Miniatures (previously Musketeer Miniatures) while at least one is from Copplestone Castings. All of them are excellent figures, easy to prepare and a real joy to paint.

Even though the traditional uniform of the Kornilov Shock Regiment had the men in red caps I decided to keep these lads in a mix of headgear to show them as separate volunteers. I also painted in white-over-red cockades for their caps and right breast as that was the chosen colours of the Czechloslovakians fighting in Russia. 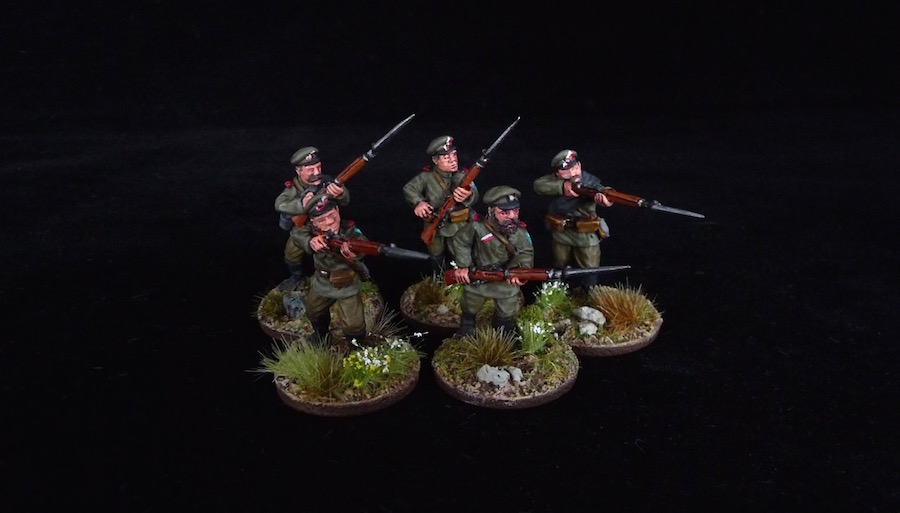 One thing some may notice is that there are a lot of white flowers on these bases. I thought that since the basic uniforms in the Russian Civil War were often very similar to one another I’d have the white flowers signifying White troops and, you guessed it, red flowers for the Red forces. Dorky I admit, but I think it will make things easy to decipher when they’re all mixing it up on the tabletop. (In fact I think I’m going to use the same idea for my upcoming Wars of the Roses stuff…) 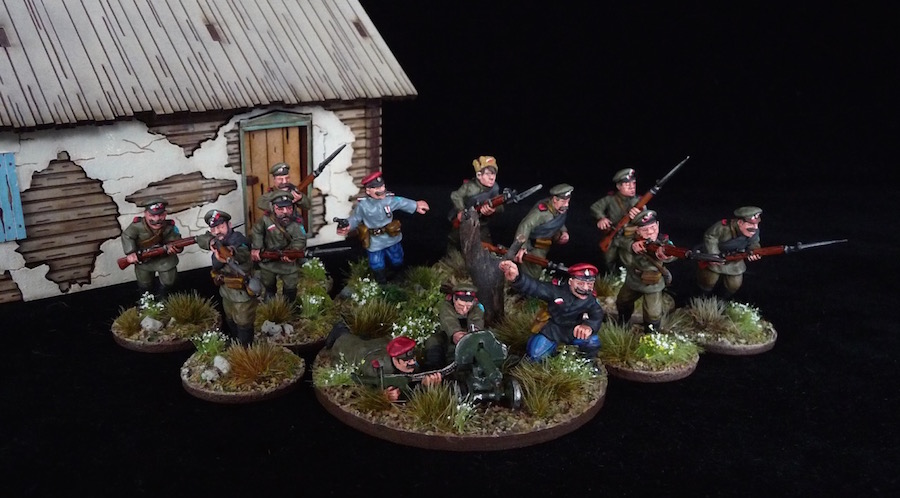 I’m not sure what I’m going to actually do with this these guys. To be honest I'm collecting this period in both 15mm and 28mm. Yep, nuts I know, but I really like painting the detail of the bigger castings from Footsore and Copplestone, while also loving the little 15mm cavalry and armoured trains from Peter Pig. I’ll probably do up enough to use for ‘Chain of Command’ and perhaps some Pulp gaming as well, other than that I have no clue. But I guess that’s the fun of it all!

These 13 figures will give me 65 points.