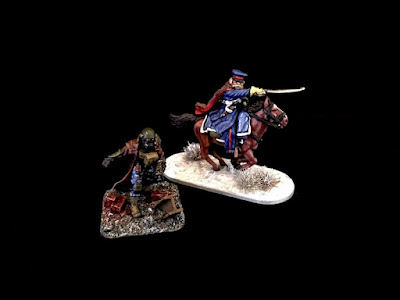 This Tribute is to Alan and Paul, our dedicated Tuesday duo.

Last year, when we were organizing the Minions of Challenge VI, Millsy had the great idea of grouping the Australians and Kiwi Challengers into a single day to better harmonize with their unique time zone (and funny-sounding accents). So this year I went cap-in-hand to Alan and Paul to ask if they would take on the responsibility of herding the Antipodean contingent along with their pals from other parts of the world and, thankfully, they kindly agreed.  I think they've done a terrific job and wanted to do-up something for them to show my thanks. 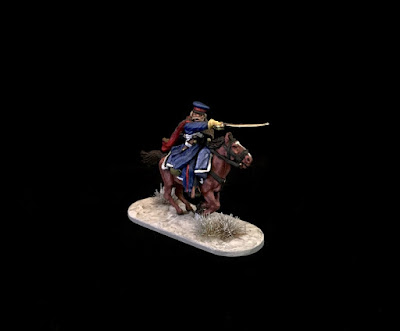 For Alan, I present a Don Cossack commander for his 1812 Russian Retreat collection. I was so impressed with his French that I thought I'd be Devil's Advocate and perhaps give him the beginnings of a Russian contingent.

This is a Perry sculpt from their fabulous Retreat range, which I think is some of the best work they've done to-date. It's an interesting model as its all a one piece casting, wonderfully posed and rendered. 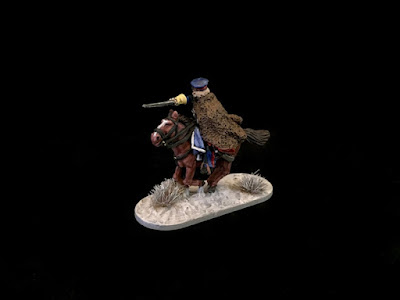 Though I often like to put white 'socks' on my horses I've done this fellow as a full red chestnut so he'll stand out nicely against the snow, chasing down Alan's grognards.

For Paul, I've put together a post-apocalyptic survivor, fighting in the ash wastelands. Paul had contacted me last year to ask about my Metro 2033 stuff, saying that he was keen to get into the genre. I recently noticed that he had picked up some of the excellent Lead Adventure castings so I thought I'd kick-in with this small offering to help fuel this project. 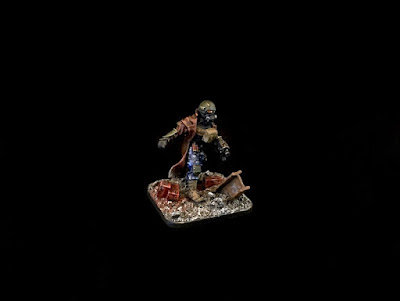 This model is a resin multipart from Brother Vinni's Miniatures. While I find most of his offerings a little too, um, turgid, he does offer some wonderful Renaissance and Sci-Fi figures. 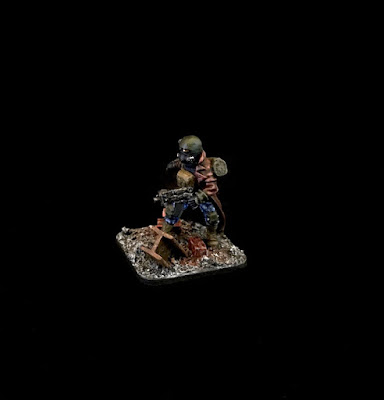 This fellow was a bit too cleanly kitted-out to my way of thinking, so I added a slung blanket roll and chest pack (made up from resin stowage bits from a 1/72 Sherman) to make him look a little more a seasoned Wasteland Wanderer. I did up the base similar to my Metro 2033 stuff, with hi-contrast A-bomb ash, shattered brick and a partially buried I-beam for him to trip over. 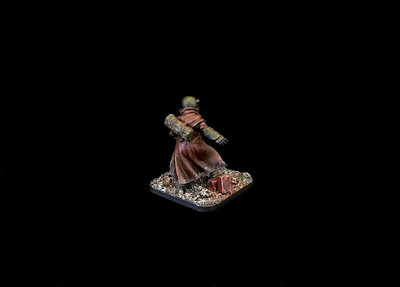 So there you have it, a Don Cossack Commander and a Don Trump Survivor. :)

Alan and Paul, I hope you guys like them. Thank you so much for all your good humour and hard work. I know it was appreciated by both myself, the participants and the visitors to the Painting Challenge. Bravo! 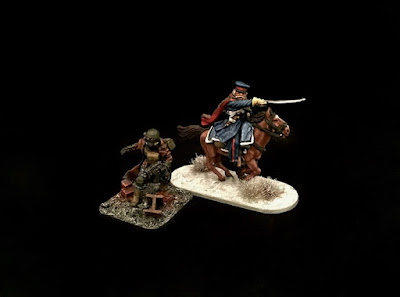 Alan and Paul: Wow - thank you Curt! Speaking as Alan (since I am Alan), I love the Cossack Commander. He will definitely compel me to paint a whole Russian force for him to help lead. I look forward to studying your snowy base closely... Paul is still tied up at work, but I know he will love his figure as well.

It has been a great pleasure for both of us to help with the minioning this year. The Challenge is the highlight of my hobby year, and has been fantastic for our gaming group. I have never seen Paul so focused on his painting, and the sort of figures he has been producing have blown me away. Actually, they have pretty regularly blown my forces away on the tabletop as well. For my part, I finished last year in a very dodgy mental state, and the Challenge has helped me greatly in my recovery over the past couple of months. I have appreciated the friendly camaraderie from every corner of the globe, and it has been a privilege to take part in such a great and creative endeavour. Thank you Curt for making it all possible! Dux out.

And speaking as Paul (since I am not Alan), thanks so very much - he looks fantastic!  I did indeed buy some of those LAF figures but they have since languished without attention as we delved into the FIW and other fun. I just preordered the Post Apoc themed Frostgrave-esque game "Scrappers" and this guy is going to help me kick start into that project- thanks mate!

I have enjoyed AHPC VII more than ever.  I currently have the best productivity I have ever had and am doing some of the best 28mm I have ever done as a result.  More importantly, being part of "Curt's Crew" (we need T shirts) to help make it happen for 96 participants has been a real highlight for me.  And excuses to hang out more with Dux are always welcome :-)  Thanks indeed for including me in this awesomeness.  Paul out.
Posted by Curt at 11:24 pm