The sun is shining on our new fallen snow, so it's a great time... to stay inside an post some images to the Challenge! I think I have enough in me for one more post after this one, maybe.

Proxies. For when you want to try something new, without spending more money. A delve into the back pile of lead, some Bitz for the Bitz God, and there you go! A half arsed attempt to keep up with the cool kids. And as we've seen with the Electoral College, proxy systems never go wrong, amirite?

So Privateer Press has sent a new faction for Hordes into the world for beta testing, the Grymkin. This is a folktale faction, where avatars of the seven deadly sins, plus other sins, are brought to the table as a series of dad jokes in miniature (I cribbed that last part from Combo-Smite).

So here's the group shot: 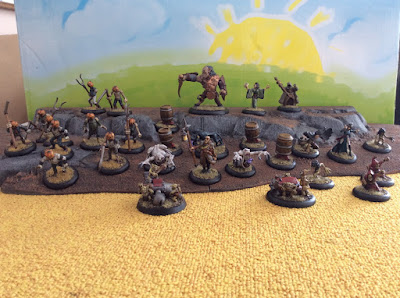 First up are the Trapperkin. These guys are the boogey men who stalk you from the hidden places. They started out as some Malifaux dead babies, or something questionable like that. There a sizeable amount of Malifaux figs in this post. Some green stuff to sub in some glam rock hair, and there you go. Yes, my green stuff skills leave something to be desired. The bases without minis on them are their trapdoor markers, where they can be hidden away to be kept from being trivially removed by ranged attacks. 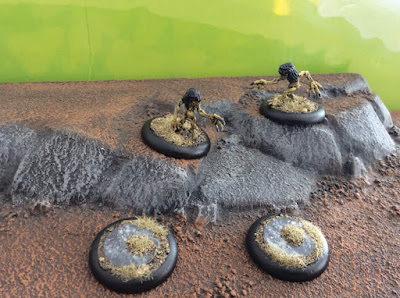 These are the some almost stock figures. The spectre on the left is a former Harlequin spectre who now a Lantern Man (really). He is the unit attachment for a unit called Hollow Men, which are made of magically enslaved deserters. I shaved off his crown and shield peg, and added watchman's lantern from the Mordhiem sprues. The two ladies next to him, stock Malifaux figures, represent a character unit of witches called the Twilight Sisters, one old, one young, measuring your fates, you know the trope. The lady in front is a Clan Wars Wu-Jen, a stock figure, and represents Lady Karianne, a hopelessly insane woman taken in by the Grymkin. If she is removed from play, all Grymkin on the board go into a frenzy. This is the one bald face "cheat", as this unit is already released. These are Gremlin Swarms, who love to play havoc with mechanical items, like Warjacks, Battle Engines and airplane engines. The are made from spare 'jack parts and GW Snotlings. The Warlock is a Defier called the Wanderer. None of the Grymkin warlocks have names, just titles that define their characteristics. He is all about movement and hiding magics, and smites people with his magic lantern. Maybe I should have used a Green Lantern as a proxy figure. 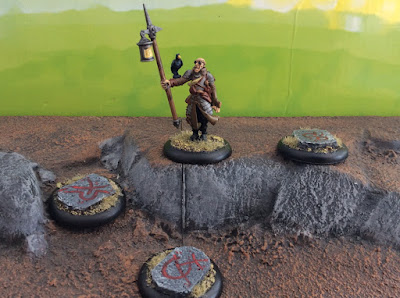 He started life as a Confrontation warrior priest, and his right arm has been bodged together with GW bitz, plus a spare raven from the Old Witch pack. Some extra ropes and stowage on the back cover up where I had to clip off a slung rifle. He comes with three markers which he places on the board within 5" of his position. At the start of his next turn, he can displace to one of the markers. 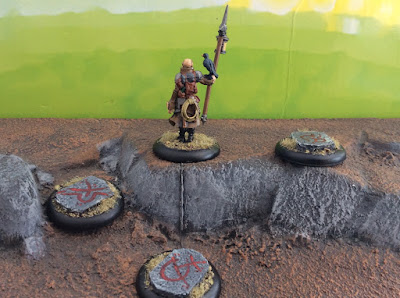 These are the warbeasts. The black one is a Gorehound. He started off as some sort of Malifaux Cerebus, but with only one head mounted. His extra long tongue is a Skaven tail. The two white guys are a rabbit/crab hybrid, imaginatively called Crabbits. They are two GW Squigs with Genestealer arms pasted on. The Big guy is called Skin and Moans, who gains power as he collects the skins of his foes. This started as a Confrontation Minotaur, with a Reaper Troll head, Privateer Satyr arms, Starship Trooper Bugs arms for evil skinning knives, GW Zombie face tambourines and a judicious use of Green Stuff to make the skin sash and hair. 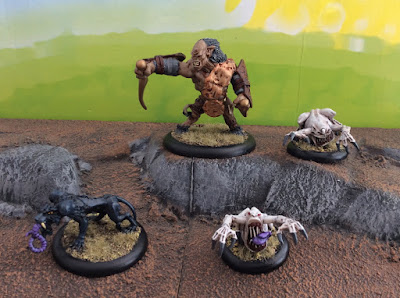 Battle for Skull Pass Night Goblins have many uses. The Cask Imps are lower torsos attached to some spare barrels, including two from the kid's Lego collection. The two guys plucking bombs from their pouches are part of a mobile distillery team that creates Cask Imps in game. 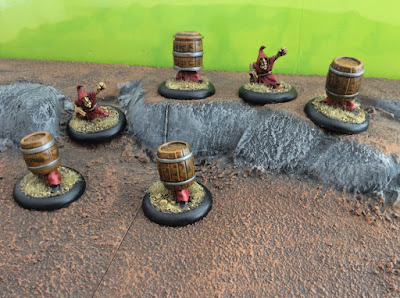 These last guys are called Dread Rots. They are pumpkin headed nasties that harvest people to fuel the rest of the army. People being harvested by plants, get it? Yup, subtle like a smack on the head with a thumper, and i should know (see my "Home" entry). These are the current spamming option for the playtest. These are GW Zombies with cheap beads for their heads, painted like Jack-o-lanterns. I know, they look like a Scooby-Doo villian, but not from the good Scooby-Doo. The bad ones that they snookered Vincent Price into doing. 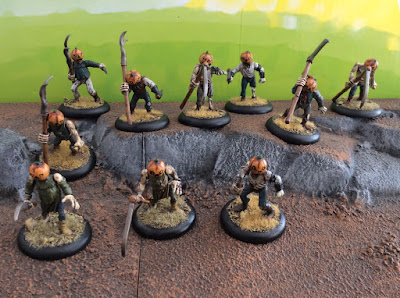 I'm going to throw myself on the judge Minions' mercy for scoring for the Dread Rots. Three were top to bottom new paints, one reused a set of legs, and the other six were merely head and right arm swaps. But I needed to display the entire unit in it's ridonculous, Saturday morning cartoon glory.


Tamsin - what a wonderful collection of weirdness! And lots of great conversion work (I'm sure we'll all keep schtum when your kids start asking where their Lego barrels have gone!).
For scoring, I'm going to count Skin and Moans as a 40mm figure, then there are 25 foot figures, two engines which I'll count as crew-served weapons and all the conversions (and figures which have been coverted after previous painting) which I'll give 15 points for. So, if I've got the sacrifices to the spreadsheet of doom right, that should come to 167 points :)
Posted by Unknown at 5:18 am