From DavidB:Chaos lord and friends (25 points) 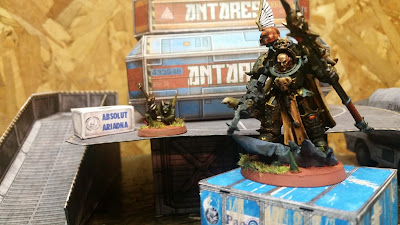 I was given a several nice Christmas gifts and they were assembled pretty fast. I am also forbidden from priming models in the basement now too! ;) Above is the terminator sorcerer lord from the GW assassin game. I have built and primed the four assassins, but I just didn't quite get to them as the Death Guard marines got bumped up in priority. 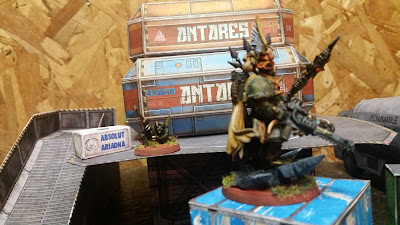 The little familiar is used as a ritual countdown token in the game. The sorcerer is the target for the assassins. I was "supposed" to build him up a certain way, but I did not like the helmet and other bits they recommended. He does have his staff and the combi melta-bolter with chainsword, But I liked the bare head as villains should always be able to sneer and taunt the heroes. 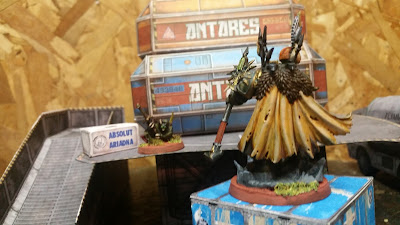 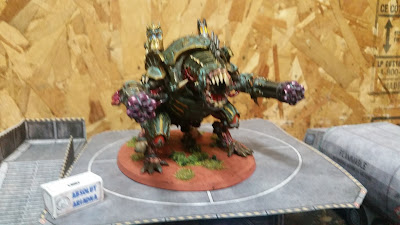 This beastie is a Forgefiend and I got to play one in early December for the first game in this house. The one I was lent was unpainted and I was very impressed with the kit. I  wanted to paint it. The beastie tar-pitted a Spacewolf dreadnaught and two squads of Space Wolves while my Death Guard proceeded to objectives. 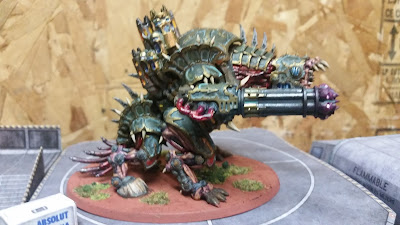 This thing accounted for half of the enemy forces eliminated, so I really had to get one. 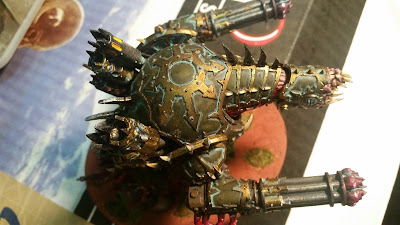 I also got the technical paints including the blue tarnish, a rust paint, an oil like muddy wash, and some of the ground effect textures. The tarnish really helped age the metal bits, and the muddy oil Typhus Corrosion just added to the neglect of the Daemonic engine. 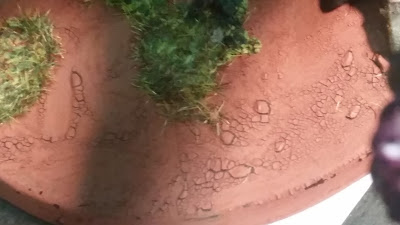 This is what the Martian Ironearth looks like when it dries. 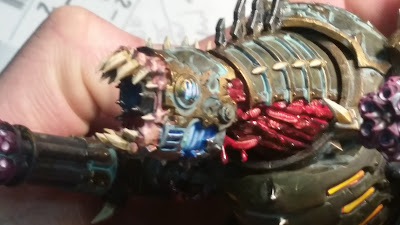 I coated the cables in the Blood for the blood god laquer after painting the cable sheaths purple and the wires tan. The drips are actually part of the sculpt. I used orange and yellow to give parts of it a hot engine glow and used the blue to white plasma effect on it's head as it's mouth is a fusion type gun. I have been painting this beastie pretty much since New Year day. 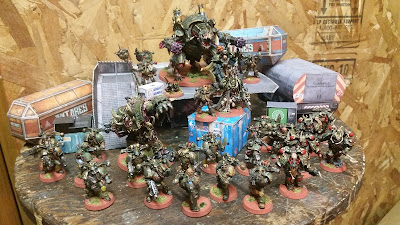 I think he is a suitable pet for the Terminator Lord, and I no longer have to borrow one as I can bring my own!
With  The Terminator lord, chaos familiar, and the big Forgefiend, this Force is complete enough for my purposes. I d have quite a few cultists to add to them, but I need to figure some vehicles for the renegade guard first.


Tamsin: Curses! I was hoping that someone else would beat me to this one, but it looks as though I'm destined to minion all of Darth B's posts today.

Fantastic painting again mate. I'm going to count the Forgefiend as a 28mm vehicle for scoring and the other two as 28mm foot so that will give you another 25 points.

Posted by david bromley at 3:53 pm