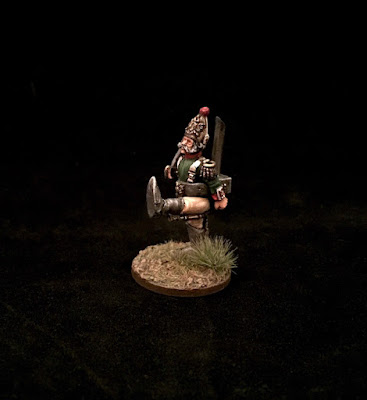 A few years ago, some wag in the Challenge, for the life of me I can't recall who, began calling the price-of-admission figure the 'Curtgeld' (as a nod to the nasty Danegeld levied by the Vikings - the cheek!). The term stuck, and my painting cabinet has amassed a wondrous collection of Curtgeld over the years, a treasure which I jealously guard like Smaug over his hoard.

As some may know, my free time this year has been restricted by work and so I've called in on friends to help me manage the Challenge. We've jokingly referred to them as 'Minions' but I know very well that I couldn't have pulled off the event without them. With this in mind I'm going to start a new tradition by providing a 'Tribute' to my Challenge compatriots in recognition and as thanks for their huge contribution in keeping this mad ride on the rails. Over these last two weeks of the Challenge I will be posting the Tributes, one by one. The 'Tributes' will be single figures of my choosing - I hope to fit the figure to the recipient.


The first Tribute is for my good friend Millsy, who is absolutely relentless in getting stuff done, both as an individual hobbyist, as a layout designer (e.g. Simon Miller's 'To the Strongest') and a magazine editor (the excellent 'Wargame Bloggers Quarterly'). His energy and skills seem boundless.


So Mr. Mills, to match your dogged determination and your affection of the Pulp genre, I present to you a grizzled Russian grenadier sporting a pair of armoured steam trousers. 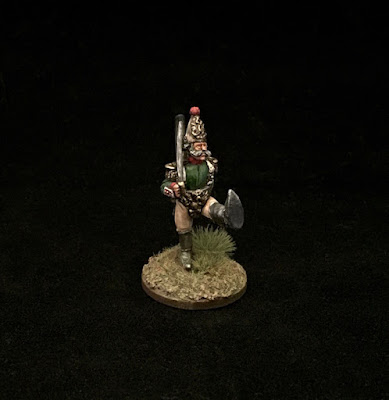 This 28mm figure is from Brigade Games, sculpted by Paul Hicks. I've added a smoke stack to the engine as it just seemed 'sensible'. 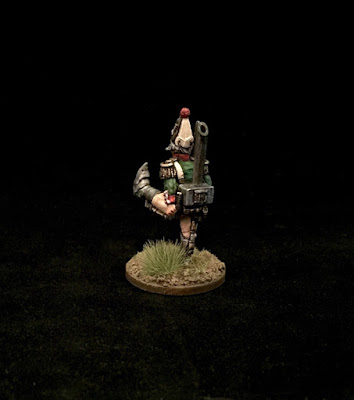 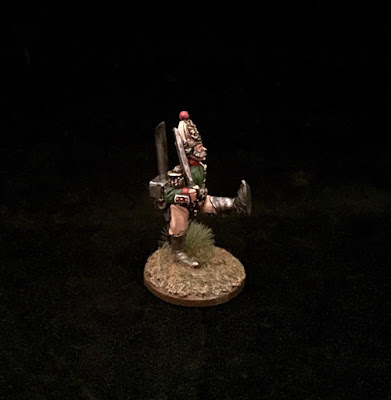 Yes, you read that right boys and girls, 'steam trousers'. The British may have their leaky dreadnoughts, the Germans their fat and slow Zeppelins, but the Russians will make a fearless grenadier out of anybody with their armoured steam trousers. Just think, with these 'pants of victory' no officer has to worry about troops faltering in their advance. Say, you need to suicidally charge a distant line of artillery? No problem! With the steam trousers the pace of advance is locked-in and these devilish leggings will march your troops to glorious (if somewhat phyric) victory!

Steam Trousers - Let Science Give You A Kick in the Pants to Victory!

On an administrative note, Lady Sarah and I are taking a bit of time off this upcoming weekend to get away, so the deadline for the final theme submission is midnight SUNDAY. I will aim to post the theme on MONDAY.

Thanks for dropping by and have a great week! 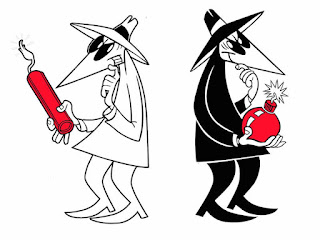 Hello everyone.  As the overall Painting Challenge is winding down soon, I thought it would be a good time to post another reminder to everyone to let me know if I have missed anything for the scoring of the side challenges & duels.

I have been updating the scores and putting a last update date on the last line of the scores so that everyone knows when it was updated, but it has been pretty hard to figure out what is actually for what since only a few have been sending me messages about their scoring entries or putting a note in the post saying that is is for a side challenge.

So, please take a look at the sheet and let me know if anything is missing.  If something is amiss please let me know about the points value in question and provide a link to the posts you believe make those points up and I will then double check and correct the score sheet.