Reminder: Saturday is the 'Reconnaissance' Theme Round Deadline 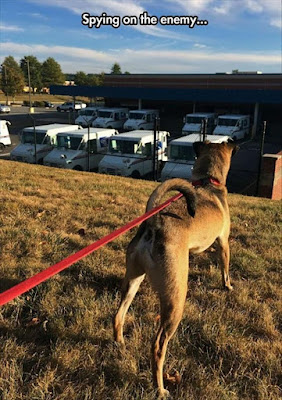 Just a friendly reminder that submissions for the first theme round, 'Reconnaissance', is due this Saturday. The gallery will be up Sunday for your viewing pleasure.

From Rob Hingley - Have TARDIS, Will Travel (95 Points)

This is my first submission to the IX painting challenge.  It consists of 1 vehicle (The Tardis) and 15 x 28mm figures for a total of 90 points (See below, Rob - you may be pleasantly surprised - Ev).

Doctor Who is a favorite Sci-Fi choice for many gamers I know to watch. I believe we choose our favorite Doctor to be the one(s) to whom we were introduced in childhood.  Mine were the first two, which aired in Canada on the CBC in the mid-1960s.

I wasn't introduced to the Tom Baker years until sometime in the mid 1980s as re-runs on PBS.

As I wrote my introduction was to the first two doctors. A simple presentation of
a Tardis, based upon photos from the original series, with the simple word POLICE in black lettering above the door. 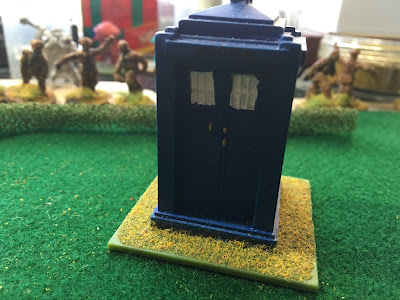 The TARDIS was a Constabulary Communications Cabinet produced by Ainsty Castings as part of their Professor What line. They are a great source of resin terrain pieces.

Three figures, two in homage to the first Doctor, played by William Hartnell, Richard Hurndall and David Bradley. The third figure represents the 2nd Doctor played by Patrick Troughton. I believe the figures were produced by Crooked Dice as part of their Temporal Traveler Series which I think is no longer available.

(Note: In the comments the Doctors were identified as being from Black Tree Design's Dr Who range. Black Tree is definitely one of my go to sources for miniatures.)

Next is a group of 12 Scary Scarecrow figures from the episode Family of Blood which aired in 2007. These figures were purchased from the Woodbine Design Company through Gripping Beast. 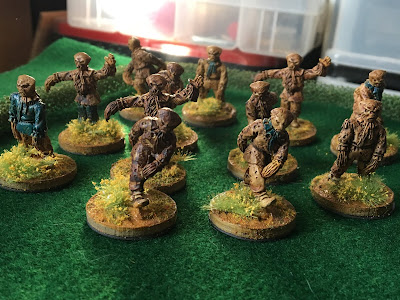 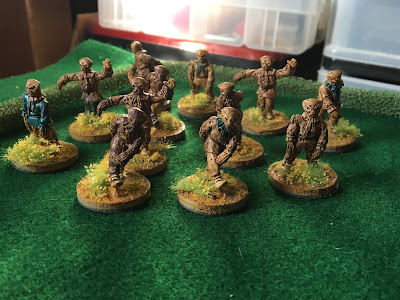 I wanted to keep these figures drab using various earth tones, but in the end decided to add just a splash of colour to a few of the figures.


The light was not the best this morning 45 mins after sunrise. I had hoped to take the photos yesterday but I spent the best part of the sun either on Skype or the phone. Happy New Year to one and all.

Cracking work on this assemblage of figs, Rob, though as a 28mm vehicle, the TARDIS now scores 20 points. The fact that the TARDIS is much bigger on the inside can have no bearing on the final score (hey, I don't make the rules...).

As a long-time Doctor Who fan, I can only approve of this submission. The Family of Blood two-parter was one of my absolute faves, and the scarecrows were a wonderfully chilling addition to the roster of bad guys in the Whoniverse.

So that's an opening salvo of 95 points, well done that man!

This 47mm tall hard plastic miniature of Chewbacca is produced by “Fantasy Flight Games” and can be found inside the company's "Chewbacca Operative Expansion" for "Star Wars: Legion"; "a miniatures game of thrilling infantry battles in the Star Wars universe!" Described as "Han Solo’s ever-faithful companion", the Wookie was played by Peter Mayhew and made his first appearance in George Lucas' 1977 American epic space opera film "Star Wars".

The figure was initially primed with two coats of "Vallejo" Heavy Sienna, shaded with "The Army Painter" Strong Tone Quickshade, and dry-brushed with both (more) "Vallejo" Heavy Sienna and (lighter) Heavy Brown. I then applied a combination of "Citadel" Doombull Brown and "The Army Painter" Strong Tone Quickshade to Chewie's side-bag, plus "Vallejo" Gunmetal Grey to his "trusty bowcaster" and along his ammunition belt. These areas were subsequently washed with "Citadel" Nuln Oil and highlighted with a little more "Vallejo" Gunmetal Grey.

I then encountered something of a painting dilemma, as having previously pigmented two slightly smaller models of Chewbacca I knew the next stage was to carefully pick out the leather covering his belt's line of hard metallic shell boxes. However, the sculpting for this version of the Wookie didn't allow for me to get my brush tip in between the tiny containers and I couldn't help feeling that there was more than enough brown on display without the smuggler's bandoleer being the same colour too.

Very tidy work on this iconic character, Simon, and I think we can forgive you some differences to the colour palette in the interests of clarity!

Since a 40mm figure scores 7 points, I figure a 47mm model has to be worth at least 8.5. As I don't want to get into trouble with Miles by fouling his spreadsheet with decimals, I'll round that up to nine (if anyone asks, put it down to Beginning Minion Syndrome).
; )

First week of scheduled posts and as usual, I try to have something ready for publishing each week. Deadlines give some motivation to me, I just need to finish something, not necessarily much, but something to keep the Challenge running. After the frantic first weeks, it is calming down and getting more organized, so I thought a short introduction could be nice. I'm 40 year old painter and parent (of three year old son), I mostly play the different Games Workshop games, wide variety of board games and so on. I painted my first miniatures in the early 90s to use in our RPGs and soon after that I bought Blood Bowl 3rd ed. I really started painting and playing when the Lord of the Rings was released by GW first time. We switched quite soon to 40K, because most of the friends thought that scifi is better. We played through 3rd and 4th edition, but when the 5th was released, we were all living in different cities, had jobs and girlfriends, so we decided to stop. I kept on buying and occasionally painting miniatures until some five years ago I joined the local Blood Bowl league. One of the players had LotR armies as well, so we started playing that as well. I kept on wanting more, so I gave my little finger to Age of Sigmar as well. Last year I started Kill Team and I bought some Death Guard before Christmas. I have all kind of random miniatures waiting for the paint, so with the Squirrel competition I have a perfect excuse to paint what ever I want - I have enough painted miniatures for all the games I play, so there is no "need" to paint more, so I can now focus on painting things I like and Squirreling. Until I join some Escalation league and everything gets ruined... (I like Excel sheets, but I don't use them for Challenges.) I do have a hobby blog, but it is in Finnish: https://vainvader.wordpress.com/. You can also follow me in Instagram @vainvader, I use English there.Feel free to ask more, read and comment (even in English) my blog, follow me in Instagram and keep painting!


Back to the real thing, some painted miniatures. After the 100 point Army of the Dead (and preparation for the first Bonus Round) here is something smaller this time, 1/100 scale SU-152 by Zvezda. Very nice model to assemble and paint, I mostly paint 28mm miniatures, but these smaller things are nice change once in a while. May be I even play with them sometime, I bought the TANKS! game last year, but haven't even read the rules yet. But I have heard it should be a light and quick tank game, X-Wing style. 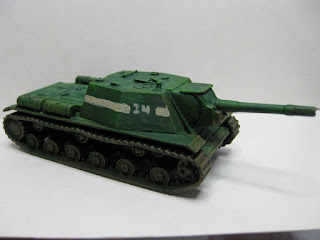 Quite simple paint job here, I had some troubles browsing the Internet yesterday - most of the pictures didn't load, so I had little choice. Dark green seems to be an appropriate color for WW2 Soviet assault gun. I added white recon stripe and number based on a picture, no idea if they are historically accurate or not. And it is not even white, it's Ushbati Bone, I think bright white is just too bright usually. There's also some lighter green to bring up the details and some brown to indicate mud 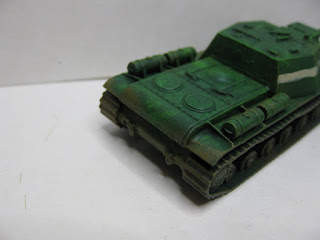 Some mud and light green highlights

First-time minion gets thrown a curly one; 15mm (8 points) or 20mm (10 points) or something in between? What the hey, I'll split the difference and give it 9 points plus one for being insane enough to hand-paint numerals and stripes on this chunky little beast.

Minion Ev is finally on the case after looking after two pre-school age grandchildren for the last two-and-a-half days; they're delightful, but they are exhausting, especially in a Sydney summer.

That's not me, of course; I look far worse than that.

A bit about me; I've been a wargamer and figure painter in one form or another since about 1976, when I discovered the local library's collection of Donald Featherstone books, the gateway drug of choice for most fifty-something lead pushers. Painted and played GW games with my sons, GM'ed AD&D and Runequest, and now enjoying smaller-scale tabletop games with occasional forays into 18th C Imagi-Nations with Millsy (see The Wars of the Sable Hat for more details). Also a sporadic contributor to Canister and Grape (the other blog where Millsy does most of the heavy lifting...).

Those of you who pay attention to such things will know that this is my first outing as a minion (fourth as a Challenger), and I plan to be a fair-minded and reasonable judge of your work, at least until the Sydney heat drives me crazy and I go full Colonel Kurtz; "Bonus points for the aubergine! But I hate bases which aren't made of WeetBix! Minus five points!"

This Wednesday is fairly quiet as people are still recovering from Christmas and Hogmanay (that's New Year to those of you without the blessing of Scottish heritage), but we have;
So, Challengers, let's get Challenging!

Evan
Supreme Despot and Unquestioned Autarch of The Midweek Realm
'My Door Is Always Open!'