From DaveX: A Company of Coldstream Guards (25 Points)

A few weeks ago in the challenge I posted my Test Figure for my Waterloo Project where I am going a Battalion of Cold Stream Guards.  I have painted an additional 5 to complete a company of 6 (depending on ruleset used).  These are painted as Centre Company.

These figures fit in my system of magnetised movement trays and can be used in a variety of combinations.

I only painted 5 this week and the 6th is for photographic purposes only.  This will snag me a handy 25 points :)  Figures are 28mm Plastics from Perry Miniatures 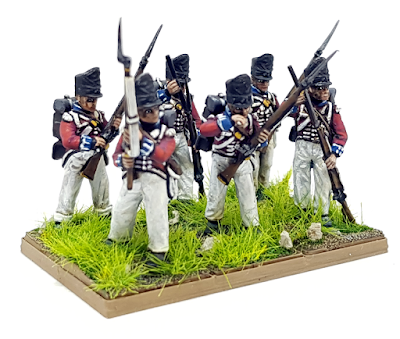 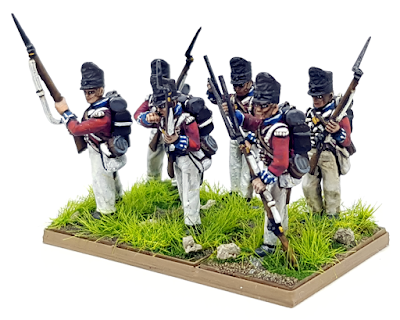 
Wow, beautiful Napoleonic Brits, Dave. I'm usually not a huge fan of sabot basing but yours look terrific. I think it may be the longer grass tufts that help to mask the seams between the individual bases, whatever it is they look great. I appreciate how the various loading poses provides them an overall coherency as a unit, and I also really like how you did their skintones and the scarlet of their uniforms. A cracking half dozen Guardsmen!
__________________________

From MichaelA: A Final Flourish (50 points)

Allowing terrain to be included in this year’s challenge has afforded me the opportunity me to tick off a few pieces that I had earmarked for construction later this year.  For as long as I can remember I have wanted a viable river system for my table and had been looking at various options.  In the end I plumped for Almera Plastics sections. 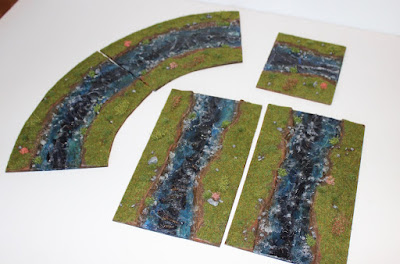 Working initially with a couple of curves and straight lengths, these are relatively inexpensive vacuum formed plastic sheets, but take all the guesswork out of making rivers that links together.  I decided to give mine a little more weight and having trimmed the edges a little they were glued to some 2mm MDF sheets.  I used a little sandpaper to make the surface a little rough and then added some sand and small stones mixed with a generous amount of PVA.  Having set aside to dry they were simply undercoated in black and then painted as normal.  I like my rivers to be blue and so used a dark Prussian blue, lightening to the edges.  Once all was completed the pieces were varnished and dressed with static grass and tufts.

Inevitably it was all going to come down to the next phase, the water.  I had had some luck with Poundland epoxy resin and had initially thought that was going to be the way to go with this this project, but stumbled across an alternative – clear silicone sealant.  To say that I was a little anxious about the application would be an understatement, especially given the time that had already gone into the project, but all seemed to go well.  Working in small batches, I simply squeezed out the silicone and then spread around with a lolly stick.  Water helps to push the incredibly sticky substance around, but be warned it is difficult to tame.  If you are after a still millpond effect then this isn’t for you, it is more babbling brook, which I happen to feel looks rather effective. 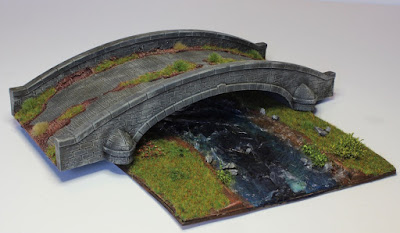 Having completed the river, I was reminded that I had picked up was once an Italri stone bridge in the Warlord Games half price plastic sprue sale.  Simple enough to glue together, but once I had slapped some grey paint on it, I was left feeling a tad underwhelmed with an incredibly clean bridge.  A bit of weathering was called for and with the addition of some pumice gel and static grass I was able to create something that fitted more readily with the completed river sections. Whilst sticking pieces of hard plastic together, I was reminded that I had also had a Renedra Plastics ramshackle barn lurking somewhere in the pile.  Once finally unearthed this was glued together and then undercoated.  Following a rather predictable pattern, blue for water and grey for stone the barn was painted brown for wood and no sooner had I finished when I realised that this just wasn’t right.  I set about it with the drybrush and completely changed my mind with regards to the tiles on the roof, opted for a more conventional slate grey. 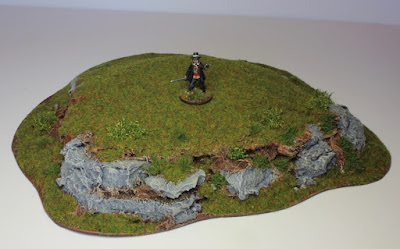 As nicely detailed as it is, there isn’t a huge amount to trouble the painter, although I did manage to pick out a few details here and there, before adding some flock to hint at its dilapidation. 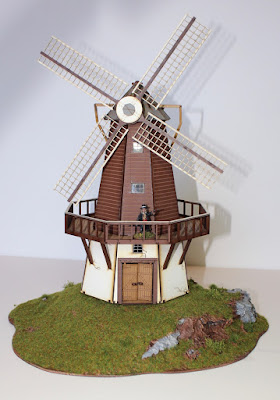 Finally then, the Saintly Mrs. Awdry had very kindly bought me one of 4 Grounds European Windmill and whilst slightly anachronistic for my Witchfinder world, it is such a lovely kit that I wanted to show it off a bit more.  To that end I needed a small hillock to raise it off the table and so this last piece of terrain was inspired by a piece that the oh so talented James from Oshiro Model Terrain had shown on his on his blog. 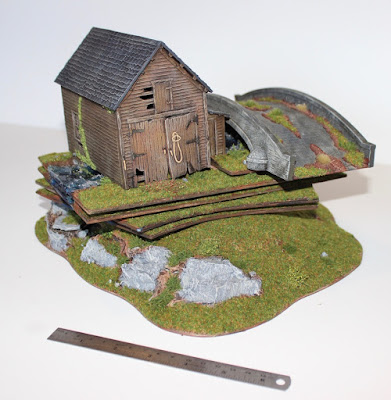 So my final flourish was a pile of terrain that I hope will see action on the table this summer.

What a lovely assortment of terrain Michael - so much to enjoy here. Your rivers sections turned out beautifully, especially that babbling water effect. The barn is wonderful with it's worn and weathered clapboard sides. AND that windmill is the absolute bomb - gorgeous stuff and very evocative for your Whitchfinder setting.

Just finished up 32 Napoleonic Bavarian Infantry.  They are plastics from HaT. I haven't based them permanently because I will be mailing them to a friend and I'm not sure how they should based and I don't want them to break during shipping.

He doesn't know they are even showing up. I hope he likes them.

Here are the photos. 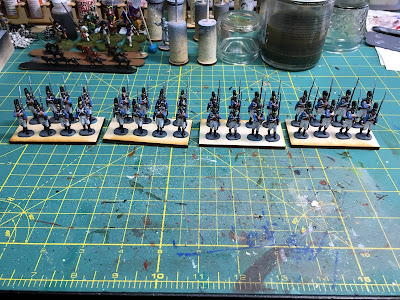 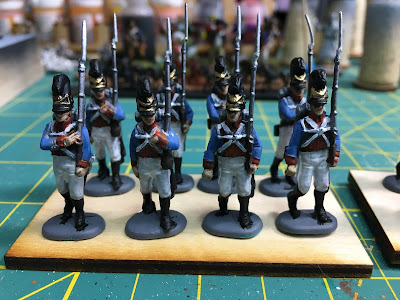 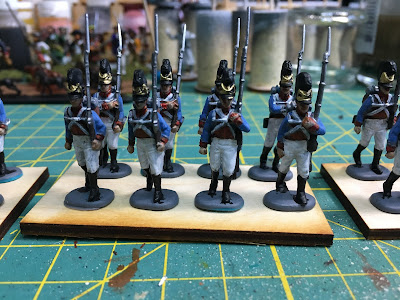 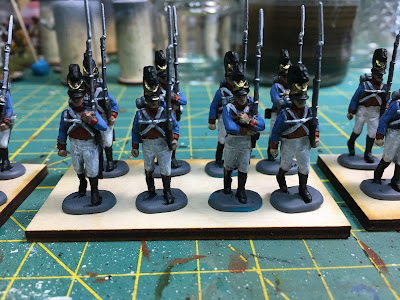 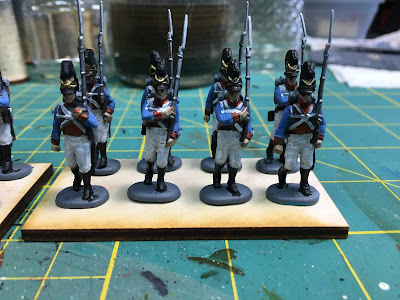 Wow, these will be a very nice surprise for your friend, Victor. Beautiful work. I didn't know that HaT did 28mm Napoleonics - they look like quite nice sculpts from the pictures. I've always had a soft spot for the great blue uniform and whacky combed Bavarian helmet.

Holy camel that was close! Results are in for the DaveD and SanderS Camel Challenge and you couldn't have wished for a tighter finish. DaveD snuck the win by just ONE vote. Well done Dave! 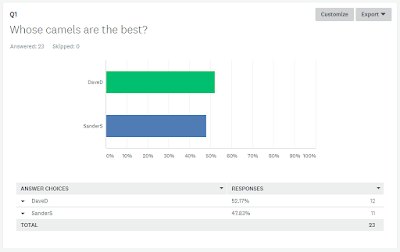 Congrats to both of you on some wonderfully painted minis. Clearly there was so little to choose between you and the number of people wanting to vote for both entries backs that up.