Time to get myself on the scoreboard as well. And probably in the highest position I will ever be in the Challenge after this point!

Being a clever man I'd decided to start my Christmas holiday early to have some painting time when the Challenge started. However the missus caught wind of this cunning plan and my calender was immediately booked full of Christmas shopping and visits to various Kitchen renovation companies, so getting these done took a bit longer than I expected. I'd hoped to be able to use the whole starting day to paint these then and grab the lead for just a fleeting moment, but alas that was not to be as I only got in a few hours of painting with all the tasks bestowed upon me.

This is my fifth time taking part in the challenge and going back to 2012 I started my first challenge with Flames of War German Grenadiers, which were actually the first 15mm infantry I ever painted. So as a homage  to those humble beginnings I decided to paint up some more German infantry. Luckily my work has improved quite a bit during the time. 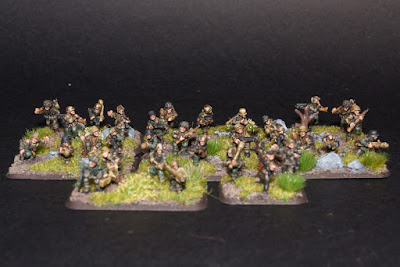 The old Grenadiers have gotten pushed to the back of the storage space, with most of my other German LW troops a few years ago as the paint job isn't really up to the standard I want on my table nowadays so I haven't been playing German lists for a while outside of Early War which I've painted later on. With a tournament coming up in the end of January where we are bringing a list from both sides and can switch up to allow for Red vs. Blue games at all times. So perfect excuse to paint up some new troops and restart my LW German force. I'm starting of with a single platoon of Panzergrenadiers with Panzerfausts and a Panzerschrek team coming in at 31 miniatures which should give me 62 points. All Battlefront minis. Mostly quite good, but there are a few with slight casting problems that do show on the minis even after my cleaning efforts. 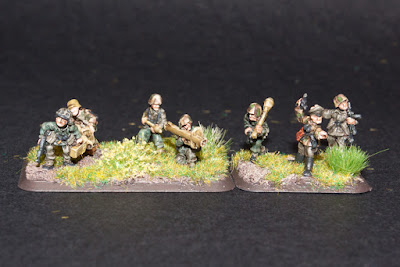 One reason I haven't gotten around to painting Germans too much is that I find painting camouflage on 15mm infantry a massive pain. It never really seems to look correct on that scale. Single colour uniforms are just so much nicer to paint up. Still Grenadiers in camouflage smocks are iconic to the German Late War look so I had to man up and get these painted. Definitely not a faithful representation of the Splittermuster, but looks good enough from a regular gaming distance. After these it's time for some FlaK and then I can get to the tanks, which really are the main thing for the list I'm building!

With these out of the way it's time to leave for Christmas celebrations. A busy weekend ahead as we are spending Christmas at our relatives and traveling between a few places so no painting time until next week I'm afraid. At least I've got a few books with me with suitable hobby subjects.

With that I wish you all a Merry Christmas. May your gift sacks be full of lead and plastic! With a Secret Santa gift in my pile from another mysterious gamer, I can't wait until it's evening ;)

Here in Finland using Reindeer isn't the sole right of Santa Claus. There are even Police Reindeer!


Okay, I'll bite Samuli, why on earth does that Reindeer have a police 'waistband'? And perhaps the other, more pressing question: Is the Reindeer firearm certified? I love the whole idea of wildlife being able to shoot back. 'Gee, nice red hat Mr. Hunter. Thanks for standing out so well. BLAMM!!'

Anyhoo. Lovely work on these figures Samuli. I remember your first foray into this scale four years ago and so it's great to see you back at them again. I agree, camo in 15mm is a bit of a grind, but you've done a brilliant job with these lads. I look forward to seeing the upcoming flack and armoured units.

62 points for you sir! Enjoy your Christmas break Samuli! 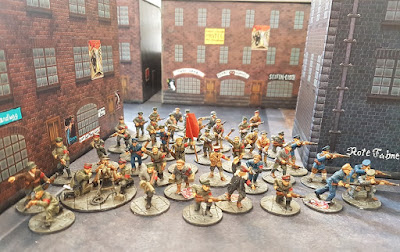 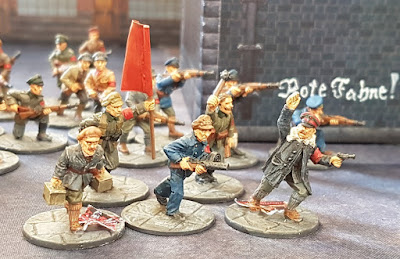 For my first submission this year, here are a bunch of Spartacist revolutionaries from Berlin in 1918-1919. The figures are all from Tsuba Miniatures, available through Empress Miniatures, and are sculpted by Paul Hicks. I would probably write more about them, but I am currently sitting just out of the rain outside my brother's house so I can connect to his email, as my internet at home has completely died, just in time for the Challenge. 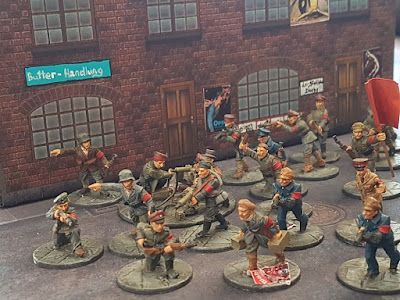 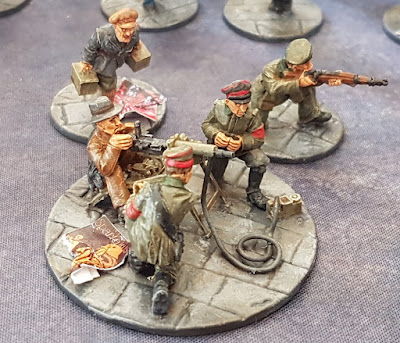 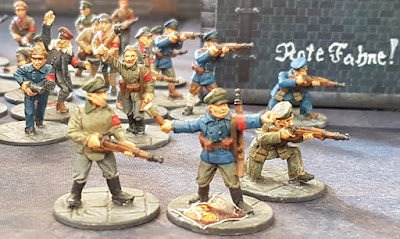 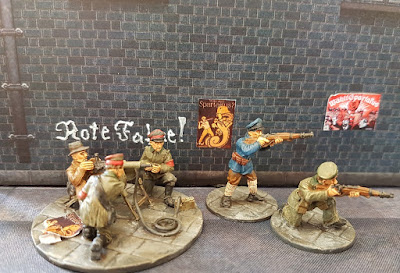 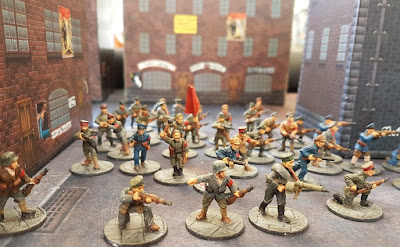 43 figures and a heavy MG by my calculations should net me 225 points. Rote Fahne voran!


I must say I'm a bit envious of this post as I have a load of German Revolution figures awaiting paint and Alan had handily beat me to the punch - and in what a terrific way. Absolutely fabulous work Alan.  These figures just shout character. I love the flagstone bases with the political posters and the card buildings really set the scene. Will there be Friekorps to face them and perhaps an armoured car or two clearing the streets? I very much look forward to seeing this project develop (once you get your internet connection sorted out).

If you want further inspiration please check out Jonathan Rabb's 'Rosa: A Novel'. It's a detective novel set during the 1918 revolution. It centers around the death of Rosa Luxemburg and a series of related murders. Very good read.
225 Points for your first assault on the roster. Great work. 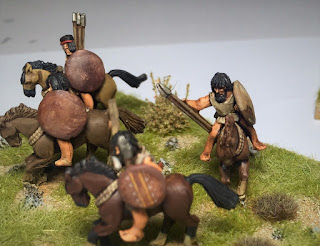 Any of you who frequented my blog (littletinmen.blogspot.com) will know that over the past year I've been... well, shall we say less than prolific - with my online presence of late.
Real life has taken hold, but while I've not been posting much online (apart from twitter), I've been busily painting away, and particularly working on speeding up my methods so that I can get some armies painted. I must say, it's been working well for me, as over the past 12 months i've completed I've a 15mm Roman army, a 20mm Chain of Command Waffen SS platoon, a load of 6mm Cold War Soviets, as well as 28mm French and British Peninsular War forces for Sharp Practice 2.

So, this challenge is just perfect for me to try to push myself a little. My goals for this are to get a shed-load of 15mm Forged in Battle ancients painted up for Sword and Spear/Impetus/To The Strongest. I'll start with some bits and pieces to complete my Republican Romans, then on to Alexandrian Macedonians, Carthaginians, Achaemenid Persians, and possibly some 3rd century Romans and Sassanid Persians.. I've also got some WW2 20mm odds and ends that I need for my Chain of command forces, some of the lovely 28mm Fantasy Flight Star Wars figures, and will also be starting on some 28mm AWI forces for Sharp Practice 2.

My goal is 400 points, which i'm relatively confident I should be able to meet. As a teacher, I've just begun 5 and a half weeks of holidays, and other than some work around the house and a week away, I don't have much planned, sop should have heaps of time for painting.

First off, here are three elements (12 mounted figures) of 15mm Numidian light horse. I used to paint everything in the 'Dallimore' style, layering up. Looks great, but takes ages, particularly if you actually want to get an army completed. These are base/wash/highlight, which to my eye looks quite similar, and takes much, much, much, less time to complete. 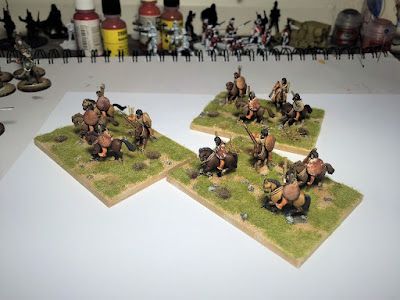 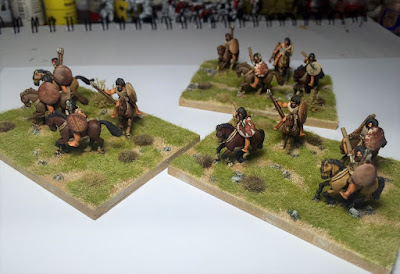 While the Numidians can serve with my S&S Romans, I've based them to tie in with my planned Carthaginian army, so have gone for a southern Mediterranean feel. These are the gorgeous Forged in Battle figures. Next off the bat for my 15mm ancients are some war elephants and Italian allies. 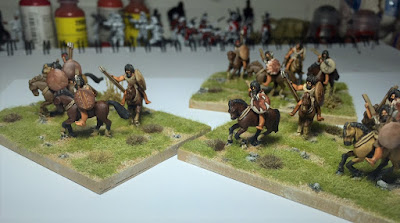 First, welcome aboard Ben! It's great that ypu're using the Challenge to get a project off the table - many (including myself) have done amazing things during this three months of madness.

These Numidians look wonderful - very neat and tidy. I really like the decorated hide shields and the chunky bases. Very, very nice work.

I look forward to seeing your upcoming nellies and Italians.  I have a suspicion you will get a LOT done in the next five weeks.

I had such grand plans for a nice early points bomb, but I've had a streaming cold for the last 3 days and kept sneezing on the figures. Much better now, it was only a cold. I have managed to finish these 15 figures.

The are Perry Plastic Colonial British and are fantastic figures that were sent to me as a secret Santa present, organised by Ian and Cath .  I opened it in error (I was slightly drunk - OK quite drunk) so I made them once I'd sobered up and the plan was to paint them all by Christmas. I'll have to make do with 15 for now. 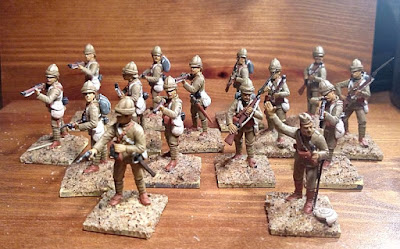 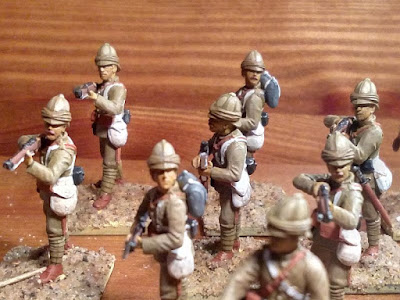 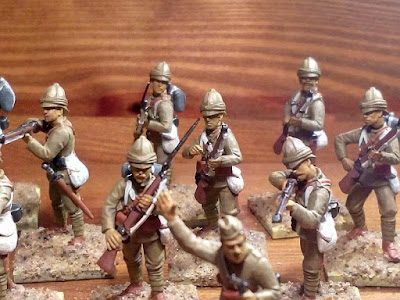 I changed my painting style a little. Normally I start with flesh and work out but this time I painted the uniforms and then added a shade wash and then dry brushed the highlights before painting the rest. This has worked OK but needed a slightly darker shade.

Good to have started before Christmas. Happy Christmas one and all.

Martin, you sound a mess. First drunk and then a head cold? Well, at least you're sober and healthy now. Well, healthy anyway. :)

These are very nice, Mr. Cooke. You did quite well with the flesh. Like you normally do, I paint the flesh first, so I know how difficult it can be to go in later, especially with cowled or armoured figures. Nonetheless you've done a great job with these lads.  How many do you have left of these to do? Is this a part of a larger project?

75 points to get you on the roster Martin - Well done!