From Sean M: Slaves to Darkness: Part 1, plus other stuff (60 points)

Inspiration is a fickle thing.

Part of my impetus to compete in the contest was to give me the gumption to clear away the backlog from the painting drawers. You know, those Plano cabinets you've been filling with those cherished finds that "I'll get around to someday!" Well, today's submission (hur, hur, you'll get it later) is a chance to clear our the odds and sods that I've been collecting for decades to make an GW OldHammer style Chaos Warband. 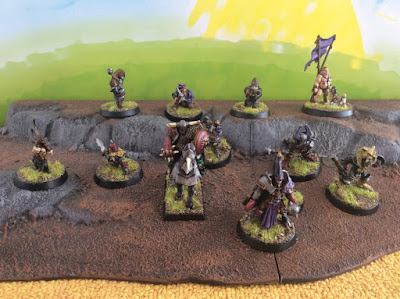 So, every warband needs a boss, so let's start with a Champion of Slaanesh. This guy/gal(?) started life as a MidHammer Chaos Champion I got from a bits box at Campaign Outfitters, I believe. It was just a torso/legs, so a sort thru the bitz box was needed to add some limbs, and a head. Although, heads were optional back in the OldHammer days. 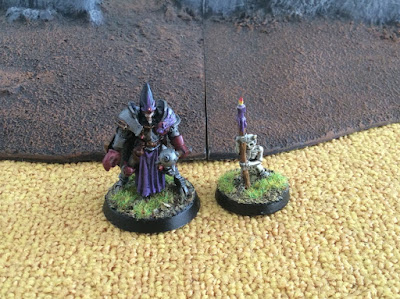 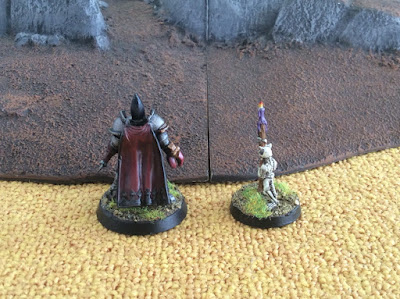 So, as the model indicates, this Champion has 26-35 Crab-Like Claws, 36-50 Hermaphordite and 66-73 Chaos Familiar. The left arm and cloak are off of a NewHammer Chaos Warrior, the right off of a Chaos Squat and the head from a 4th ed High Elf. Purple will be the colour to tie all of this together.


Alan and Paul: Nice to see a second entry today where a Challenger was able to dust off some figures that had been needing some pigmenty love for decades. This is a scary looking bunch that just screams Dragon Rampant to me. The purple is a good scheme, and kudos for the conversion work. I count ten figures on foot and one mounted, giving you 60 points. Let me know if I have miscounted anything!

From BrendonW - Mongols and Knights (90 points) 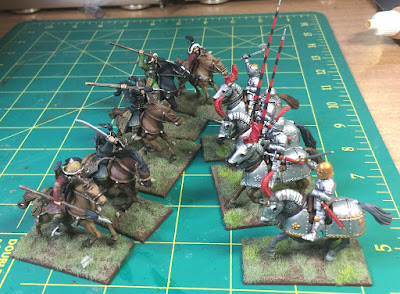 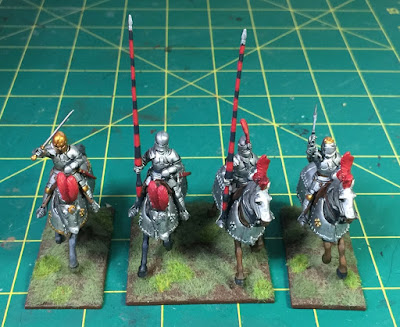 Two of these Knights have had the heroic princely treatment with gold features to make them targets on the table top. They must have more money than the other Knights perhaps. 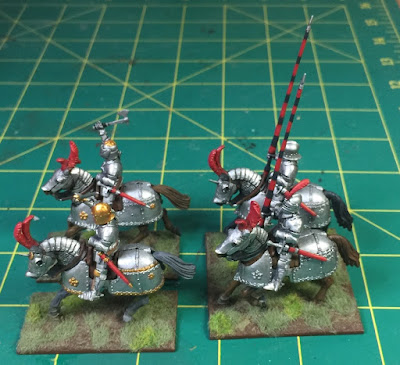 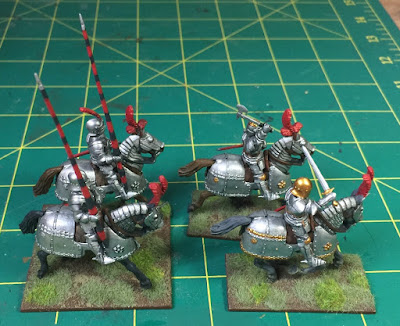 Four of these Mongols have armoured torsos from a Gripping Beast Arab box.

That's all for this week. Cheers and happy painting all the way from Darwin, Australia.

Alan and Paul: Nice work, Brendon! I love the flexibility that plastic figures provide, and swapping over armoured bodies to give the Mongols more variety is a great idea. Great basework, as well. I'm interested in what your project(s) with these figures will be?

The Crusades have always fascinated me, and the notion of gaming the period has captivated me for a long time. But I have avoided diving into the period for a variety of reasons over the years - the more I studied, it felt like the less I knew, and I wasn't sure where or how to get started figure wise, and the hesitation was enough to keep me avoiding it.  Some cool submissions in this edition of Painting Challenge (like Stephen S's Hospitallers), however, finally inspired me and decided to jump in.  After pondering some different scales and rules, I figured the quickest route to getting a game in would be a skirmish game.  With that in mind I thought I would start with SAGA.  For figures, I opted for the wonderful 28mm sculpts from the Perry twins.

These figures represent the beginnings of a four-point Crusader warband for SAGA. There are eight warriors and one knight (the test model).  These figures arrived on Friday night and I was pretty keen to get started so I spent that night and the next day preparing and priming the figures, with paint beginning on Sunday.  For the foot troops I used some flattened steel spears I had lying around, while the Knight retains the cast pewter lance which came with him.  I love the steel spears, and I can see why folks go for them...

While SAGA is a skirmish game, I based the figures on squares/rectangles so they could slot into movement trays to take part in games of "Hail Caesar" that I hope to do sometime well down the road.  That will be a long time away, but a guy can daydream, right? :)


Painting fellows wearing chain mail is relatively straightforward, but as I had been contemplating this project one major stumbling block in my mind has always been the shields - specifically the patterns on them.  I hoped to work around that using decals from LBMS, but my order is nowhere to be seen yet in the mail, and I was so fired up by the surprising success of the Winnipeg Jets over the weekend I didn't want to wait to get started, so I just did the best I could by panting freehand.  It turned out OK.  I have still have no idea what the story is with the patterns on the shields, but for now, I'm trying to "fake it till I make it."


I find preparing the Perry castings can be a chore, but as Curt has often said to me it's worth it in the end, as these were a real joy to paint and I absolutely love the sculpts.  It's always a great feeling when a new project offers such a nice jolt.


While these figures are meant to take part in games set in the Crusades, I suspect they might do for a variety of different settings where Normans were involved, from battles in Italy and Sicily to service as mercenaries for a later Byzantine force, among a few options.

A big "thank you" to fellow Challengers for their inspiration, and in particular to MartinN and Peter for suggesting rules, source materials and answering a number of dumb questions!

This submission has eight 28mm foot figures and one mounted 28mm figure, which should get me about 50 points. This assortment represents about one third of the Crusader Warband...hopefully I can finish the balance during this Challenge, and perhaps make a start on their Saracen opponents as well.  The Hobby Gods will it!

Alan and Paul: Every great journey begins with a single step. I look forward to seeing this force grow into a SAGA warband, and then perhaps a retinue for Lion Rampant, then on sabot bases for Basic Impetus, before reaching the epic scale of Deus Vult, Hail Caesar or Sword and Spear. God Wills It! The great thing about painting figures for the First Crusade is that you can use them as a Norman warband as well. I think you have done a great job on these, from the basing on up. Special mention goes to the handpainted shields, which those who know me know I have strong opinions about. Indeed, I have been known to rant. LBM decals are beautiful, don't get me wrong, but the true test of a hero is whether he or she eschews such things and with grim determination seizes the paintbrush and makes something truly individual. I salute you, sir, and give you an extra 4 points for your efforts.
Posted by Greg B at 5:59 pm 19 comments

From AnthonyO - US Airborne, French Dragon Portees and even more Hinds (225 points)

This has been an exciting week for me as I have finished the Russians for Team Yankee with these last six Hinds, added to my Early War 28mm French with some brand new miniatures and I started a new force of 28mm US Airborne.

These are the last six Hinds that I will ever do, big call I know but after doing ten all now up I have had enough. The rotor assembly is very painful and brittle and caused many a grey hair to form and fingers to be stuck together during construction. Other then that they are great kits to paint and look very menacing on the table. 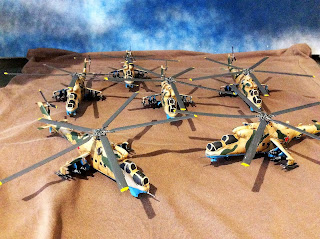 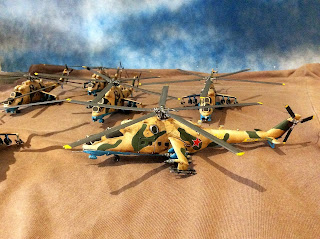 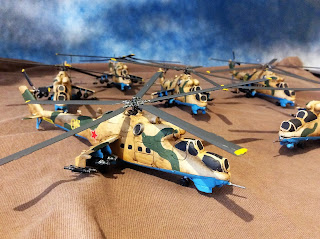 I am very excited about these miniatures which have only just come out from Crusader Miniatures. As a French fanatic for Bolt Action I have an extensive collection of forces from the Battle of France through to the Desert fighting in North Africa so any chance to add to them with new miniatures and I will jump at it. I am still doing research into the application of the units in the French Army however I understand them to be motorcycle troops who formed part of the Regular French standing Army and were well trained and equipped. They would dismount to fight as shown here and currently I am not aware of any motorcycle mounted available however I am hopeful Crusader will follow up this release with those. 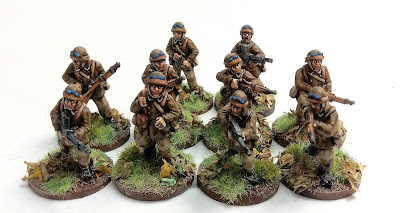 The miniatures are beautiful, well sculpted and cast and with enough variety to kit out a Bolt Action reinforced platoon without to much replication. Expect more of these as the challenge progresses.

Ok so last week I made the mistake of watching Band of Brothers again whilst painting my Dragon Portes. I failed the morale check and all of a sudden I had the entire Artizan collection of Airborne on my paint desk. I just can't explain how nice these miniatures are I quickly decided that they are going to be my showcase army of 2017. Again expect more of these as the challenge winds down.

For this week I have painted 12 infantry troops and 3 artillery crewman along with an Airborne 57mm Anti-Tank gun. 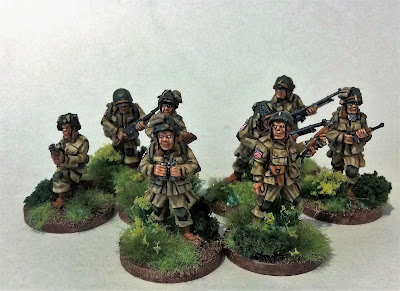 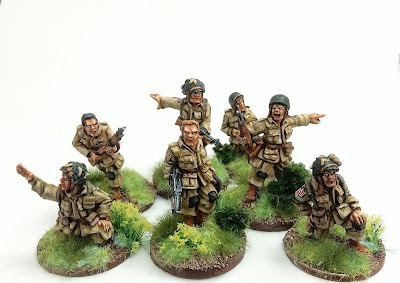 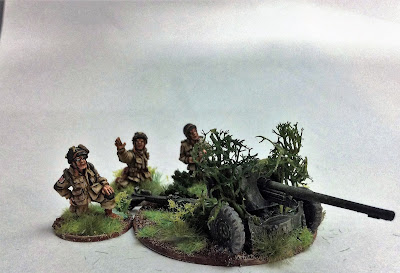 Finally a little Easter Egg if you have made it this far is my share of the Curtgeld, a 28mm Landsknecht member of a looting party. My share is done and is to be shipped off to the other members of the crew so they can put the full party together. 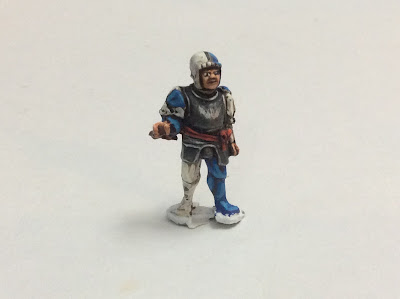 Alan and Paul: 'Failed my morale check..' - hah! Love it! It has been a real treat seeing your entries each week, and these are my favourite of the challenge so far. The Hinds are great, but I am blown away by the French, and particularly by the US Paras. I really admire the way that you manage to get so much depth of tone into figures that could easily end up looking pretty drab. Just lovely stuff! I look forward to basing up the Landsknecht along with the efforts of the other Odinians.

As for the points, the six Hinds get you 60 points, the 26 x 28mm figures earn you 130 points, with 10 for the gun and 20 extra for the Curtgeld. That's 220 points, but I'm adding another five in recognition of just what a great job you have done with the US Airborne.

I may just get there, well that is the hope. A mere 700 points this year and I still think I have bitten off more than I can chew. Work just got a whole lot busier as my Boss if off on paternity leave with his wife's first born and I have stepped into his shoes. Alas I spend my nights without a brush in hand. But to stay sane I get to lick the point into shape and splash the occasional colour on some old toys. In this case some Gripping Beast Dark age minis to go with my growing horde for SAGA and some really old Metal Magic Sci-fi troopers. Points wise 21 X 28mm at 5 each (based this time hehehe) I hope to net 105.

Enough for the intro now onto the miniatures.