25 x 28mm, Plastic, Goblins.
These old Games Workshop Night Goblins have been repainted in my first experiment. I have wanted to create a Goblin army for Kings of War based on my old collection. Under old Warhammer rules Goblins usually existed as a part of an Orcs and Goblins army but KoW has them running solo. The concept for Goblins has always been very Zulu. Tharsands of them sir! So more are in the pipeline.

I wanted to get away from the bright Disney Goblin Green skin color so have used Vallejo Green-Grey. I also wanted to try stepping away from the plain black robes usually associated with them.
I was surprised at how much more muted they became overall. I also had a go at painting a few rusty things (standard, gong and Moon icon). 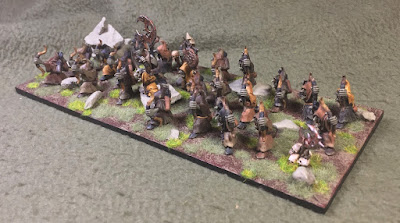 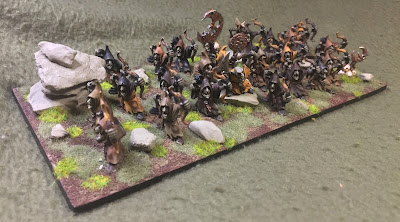 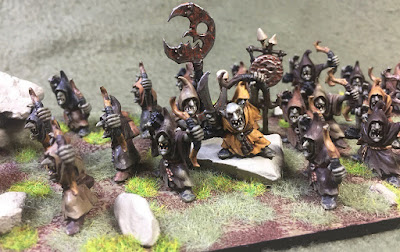 My first submission since returning from a Holiday. You think I would have painted something with less figures and that also had more prep work done. Lots of trimming off the slotta base Tab and flash removal prior to painting. That probably helped get my head back into painting mode though.

I love these Brendon, great work.  The new 'Night Goblin' colour scheme works really well and the muted effect just helps bring the unit together as a whole.  Great basing and attention to detail - a solid 125 points to your tally.
Posted by The Kiwi at 3:53 pm 15 comments

This week my hobby induced ADD took me in way to many directions, so I have about 6 different things all started but not finished, heck I haven't even started next weeks theme entry or figured out what to do for it!  So, I only have 2 smallish entries to put up today.

First up is the Archmagos Prime on Abeyant for my 30k Mechanicum army, which now makes it an actual legal force to play with an HQ. 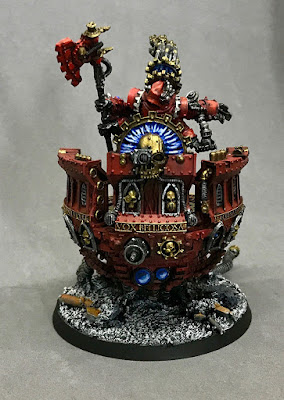 The model itself is pretty cool as an Archmagos Prime is one of the highest members of the cult of the Omnimessiah and has given their body over to the machine.  There is very little left that is even remotely human on this model. 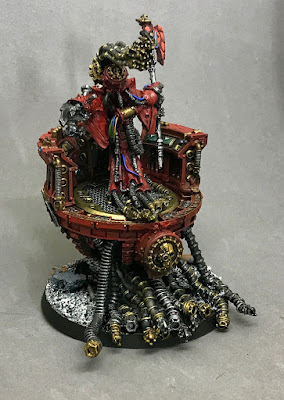 Then there is the Abeyant, his transport and control unit.  The model for it looks like either a pulpit for him to preach the ways of the machine God from or some kind of cyber organ or synthesizer, at least to me.  The transport is made to hold his custom base so that you can have him on or off the transport. 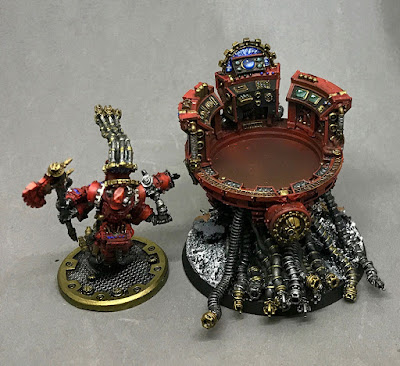 Now that it is a valid force, I have also provided an overall picture of the army so far.  This is in-fact all that I bought initially to do for the force, but I have of course fallen in love with them, and more are on the way.... 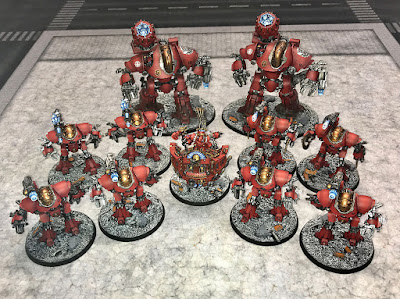 The other models I actually got completed this week are another 16 Greeks.  This time more unarmoured Greek hoplites that I did as a support unit of mercenaries or militia for either side that I am working on.

These are once again more of the Warlord (Immortal) figures as I continue to move work through them before going on to others in any meaningful way.  I still have at least 4 more units of them, but hope to get at least 2-3 done next week so that I am closer to being able to paint the Victrix ones that I have up next.

Nothing fancy with these guys, as I did them all in robes, so very little armour to paint up.  While simple individually, I think they work as a group so am calling them done.

That's it for this week, hope everyone has a good week.

Wow Bryon, you are really producing some amazing work for this year's challenge.  I am going to count the Archmagos as a vehicle, but with a crew and an additional couple of points for the increased scale of the piece, so 102 points in total, another fabulous week's work Sir.

From TeemuL: Spanish Civil and Age of Sigmar (69 points)

This week saws all kinds of stuff from me. Firstly I painted three Nurgling Bases from the Blightwar box to get some more "troopers" for my Mixed Chaos army for our Firestorm campaign. I decided to use quite bright colors, Moot Green, Biel-Tan Green wash and some yellow and blue drybrushing for the skin. They are not masterpieces, but better than I expected from them.

Then the last four unpainted Spanish Civil War Republican Militia members I have. I bought a pack last year from Empress Miniatures for the Curtgeld purposes and this year I finally managed paint the last of them. I gave all these blue trousers as well, just to keep an unified look on different sculpts. Limited palette helps with that of course, there is actually dirty white and dirty yellow on clothes, but they are not that visible in the photos. I gave them a plain red flag (with my extraordinary green stuff skills), which would allow them to fight in pretty much any force. Now I only need the opposing force, some rules and an opponent... The first two are probably the easiest. :) I could use those Crooked Dice Nazi Lizards against them, but they all have fancy sub-machine guns, so it is probably an overkill. :)

The stretch goal for this week was this Bloodstoker, which I just managed to finish. I just need add some tufts to the base, which I forgot. This fellow comes from the Age of Sigmar starter set and uses his whip to make the Khorne fighters to run even faster in to the battle. The blade on the right arm is actually stuck into his arm stump, he is not holding it with his fingers or anything. Looks quite brutal with the barbed whip.

Scoring wise the 4 Spanish guys are worth 5 points a piece, so 20 points.

Curt scored the Nurglings earlier in this Challenge with this formula: "...round out the Nurglings on the mass bases as 15mm figures", what that means, I have no idea. I feel sorry for you, my minion.

Bloodstoker is the same size as some other Khorne models I painted last year, which were counted as 40mms, so 7 points.

That gives me a total of 27 and some points.

Oh I do like a scoring challenge!  Fortunately Curt has already led the way with the Nurglings so using his method I'm plumping for 42 points for the little chaps giving you a grand tally of 69 for the entry, well done Teemu!

Posted by Teemu Laaksonen at 6:55 am 12 comments

One of this year's projects is Wetzel's Mill, a battle that was fought shortly after Cowpens by some of the same troops - it is one of the scenarios in Warlord's Black Powder Rebellion! supplement. I'm hoping to have all the troops ready for a one day event in Portland in early December.

The 71st foot were at both Cowpens and Wetzel's Mill. They were one of five or so highland regiments that fought in the Revolutionary war (American War of Independence).


I have a bunch of sprues from two Liberty or Death sets - not sure what I was thinking getting quite so many - as well as some assorted AWI Perrys that I bought from someone online. The assorted Perrys included some in kilts. The kilt had probably been abandoned by the time of the Southern campaign - but maybe a few of the hardier and more traditionally minded souls kept theirs?


The kilts won't make the button counters happy but I did do things like paint the officers' coats brighter (they were scarlet whereas the other ranks' coats were brick red - in reality all would likely be faded and ripped up on campaign). There's a grenadier company that will eventually be part of a converged grenadier battalion. Speaking of buttons - does anyone have a recommended brush or technique for doing buttons? I keep finding that my small brushes are too pointy (and make a line rather than a blob) and my larger brushes tend to get a stray hair or just hold too much paint. It all results in rather uneven buttons.

The heads and some of the figures are from Kings Mountain Miniatures.  They're somewhat heroic but I like them. Plastic bodies from Warlord/Wargames Factory. Rest of the metal from Perry. 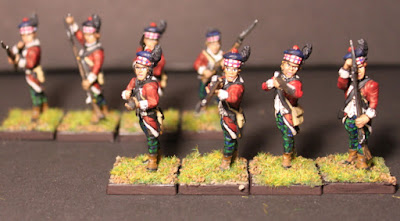 This was my first try at Tartan - I experimented with blacklining either the outline or across the weave (The real "government set" tartan has a dark strand in both places).  It was brutally hard painting and blacklining over the highly textured Wargames Factory breeches - these really are much better painted and washed with Strong Tone! Someone suggested that it only needs to look like tartan at 2 feet - I'm pleased with the results - I especially liked doing the hats with the blob of blue where the red weaves cross. 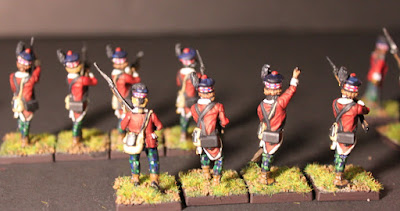 I considered doing a wound on the casualty but then realized that because he was fighting the Continentals that he had been shot in the back. I magnetized him so that he can be placed on a base dial that I'm experimenting with - this is a heroclix base that's been taken apart and given new numbers - it goes up to 12 so it will work for severl rulesets. I think I'll prefer this to casualty caps/markers  and I can use the magnets so that the same dials will work for different armies/eras.

If it looks like this battalion is missing a musician - it is. He's not quite finished - but guess what instrument the bonnie wee lad will be playin.


One Mounted, one dismounted officer and one casualty from KMM
13 Foot with Warlord bodies and KMM heads
9 Perry Foot

Tremendous Pete!  I admire any chap that takes on the challenge of painting tartan on the wee lads and first attempt or not these look stunning.  My morning cup of Earl Grey was nearly spat across the room when I read your reasoning behind not indicating the wound on your fallen hero, very funny.  Now on to the points, I am awarding 132, a couple of bonus points for bravery and clever basing.  Many congratulations on a fine unit and reaching your target score - a cracking start to the Saturday Showcase.