I have completed the Union infantry brigade that was in the painting plan. That finishes up the 10mm stuff for this challenge (well there is one post to come later with them in , but they are painted waiting something to add to it). 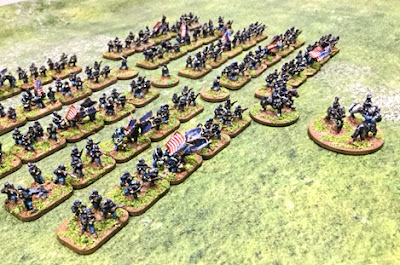 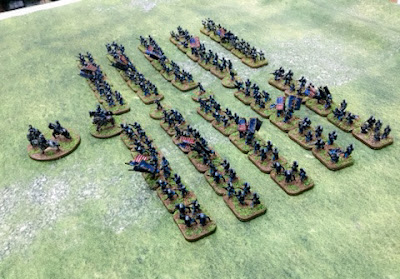 The 20 flags are by Pendraken .

This keeps me nicely on track points-wise .

More great 10mm stuff on display from Challengers today. Fine work here Dave - and yet more inspiration for my own stewing 10mm projects. I'm sure it's the same for other Challengers as well. Great work - nice pops of colour here and there on the minis, fine ground work and basing. Excellent stuff sir!

I am using my Minion powers to add an additional 10 points for flags, and the impression created by a mass effect photo. It's not like you need more points, but...wow, look at all of those troops! Great work.

And tanks? Lots of tanks? Bring it on! Can't wait to see them. 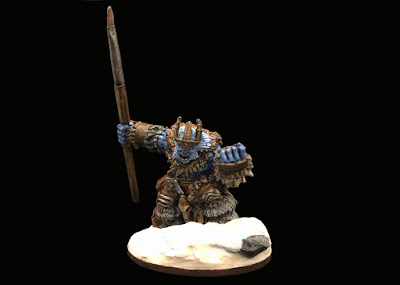 Pick slung over his shoulder, Martin emerges from a pit he's dug, geological samples in hand.


'Fascinating... You realize you're sitting on a huge reserve of natural gas?'

The Snow Lord blushes, embarrassed, 'I know, I think it's either the Brussels sprouts or those yappy guys with the funny red caps. I can't give them up, they're both so nummy.'

The Snow Lord shifts uncomfortably, 'Anyhoo, what can I help you with?'

'Well, I'm looking for treasure. I thought I could find it on my own, but since I've had no luck I thought I'd ask you.'

He snaps his fingers, 'Okay, I got it. You seem to be a guy interested history and old stones, right? You probably like old buildings and walls too. I've been watching that great series about Troy. You know, the one about Trojans, Greeks, fickle gods n'stuff. So let's do something associated with the Iliad, now that would be a hoot.


Good luck with it Martin. I look forward to seeing what you come up with.

My 7 years War 10mm Austrian project continues with the aim of building the full army for the Battle of Lobositz, the 1st major land battle between the Austrians and the Prussians. 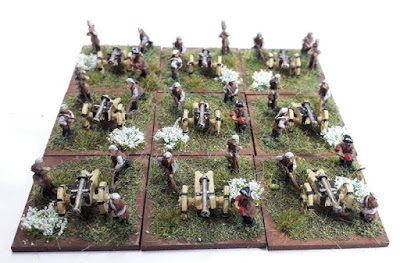 The last 9 battalion guns - I now have 15 of these 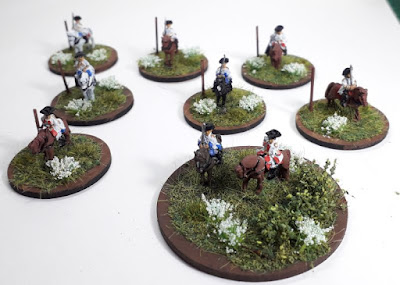 Some officers to command brigades and divisions and CinC field Marshall Maximillian Ulysses von Browne to command the whole army on the front. I've added cuffs and lapel colours as they were generally all white with some gold (Ok a lot of) gold, which makes them very boring in 10mm.

More great 10mm goodness - I love seeing figures in this scale, particularly from Pendraken - such awesome stuff. My recent output in this edition of the Challenge might not show it, but several large 10mm projects are brewing behind the scenes on my painting desk, and submissions like these help to inspire them along.

White coats, nice facings, and gold, gold, gold! What's not to love? Oh, to dress like an Austrian commander...anyway, that's 63 points for you. Well done.


The 28mm Winter WW2 project continues to move along. I continue to "round out" my initial German forces with some additional support in the form of an 8cm mortar team and an additional MG42 LMG team.  The mortar team are 28mm figures from Warlord's "Bolt Action" range - the mortar and crew are all metal, while the spotter is a plastic figure. The LMG team are 28mm metal figures from the "Elite" range produced by "Offensive Miniatures" (these are awesome figures, although the name of the business is unfortunate and not ideal for Google searches...)

On-table mortars and artillery are a bit iffy when in comes to 28mm gaming, but the models are fun and the presence of an 8cm tube is at least somewhat plausible (as opposed to, say, a 12cm mortar).  This is yet another fine piece of sculpting from Warlord's range of metal "Bolt Action" figures.

It is often the case in different rules that a spotter of some sort is required in order for the mortar to fire indirectly on enemy targets. I had one figure that would probably do the trick already from the Platoon Command pack, but I wanted to give some of the Warlord 28mm plastic infantry a try, so I put this fellow together - he could act as a spotter/commander for the mortar team, or just a late war German NCO generally.

I have a generally dim view of plastic historical miniatures, but the plastic WW2 Germans in winter kit from Warlord are not too bad. The selection of poses available for LMG teams in the plastic box is terrible, but for regular infantry and officers, not too bad at all.  The weapon loads definitely skew to late war, which is fine for my project, but if you are looking for winter of 1941 or 1942 they might not be so good.  They paint up OK - not as nice as proper metal figures of course, but they are OK.

When I decided I wanted to dive into this project, I naturally had wasted invested much time in many online searches for different figures I might use.  I had seen these "Offensive" miniatures advertised many times, and thought I would give them a go - the sculpts look neat, with a lot of character.  The range is fairly complete - and there are no prone LMG teams, so, a win!

Sadly, they took a long time to arrive in the post. The combination of Canada Post and the Canada Customs agency is a potent force for delay...toss in the Christmas holiday, and it was going to take a long time to arrive.  So by the time they did get here, I had already painted several units of figures from Warlord's Range, leaving these other ones on the back-burner for now.  Still, I am short on LMG teams, and I did want to at least try some of these new ones out, so I pulled this LMG team out of one of the squad packs.

These are very nice sculpts - 28mm for sure, although not as large or heavy as Warlord's "Bolt Action" figures. I also found the faces lacked some of the definition and character you get on the Warlord sculpts.  But overall, these are still wonderful sculpts, and I highly, highly recommend them to folks looking for 28mm late-war Germans!

In terms of points, we have six 28mm infantry figures and one 28mm crew-served weapon, which should be good for 40 points. Thanks for looking!

***
Guest minion Byron checking in today, to help out Greg by minioning (that is a verb right?) his entry for him, so he didn't have to post his own.

Another great entry Greg I love the overall look and feel of this project.  I find it amazing how well all these veried and dark colours actually blend into the winter tables you put together.  I find it very counter intuative that dark colours would work in the winter, but man the figures almost disapear against any kind of mixed terrain on the table.

I also find it funny how we all have our preference of material for figures.  I constantly hear Curt, Dallas, and yourself go on about preferring metal over pretty much everything, and sometimes hear about resin, however for myself, plastic is my favourite due to the simplicity of working with it and how forgiving it is (less chipping of paint, less risk of warping like resin, etc).

Keep up the great work though, all of these figures look great, especially with your basing scheme here.

From ByronM - A visit to Roundwood's Tower (44 points)

Well, it has been a little while since my last post and that is for a few reason, one of which being that I had no clue where to go next on the map, or what to do for it.  After some thought I decided to climb down from the peaks along the path of imagination and visit Roundwood's Tower.

To score points for the map space I had to do something alternate history based, and I had just the model for it that I have been wanted to paint up, a female Roman centurion.  This is a big model measuring in at just about 45mm tall and is pretty beefy as well.  It is supposedly 35mm scale (heroic scale) but is larger than that, and will fit in nicely with either my Arena Rex figures or as a Kingdom Death hero in a pinch. 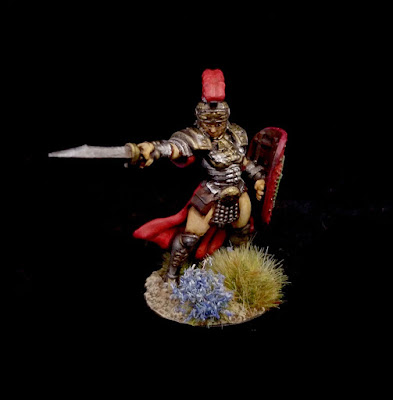 The thought here was, what if women were allowed to fight in the Legions?  I for one would not want to face off against her, as she looks suitably intimidating! 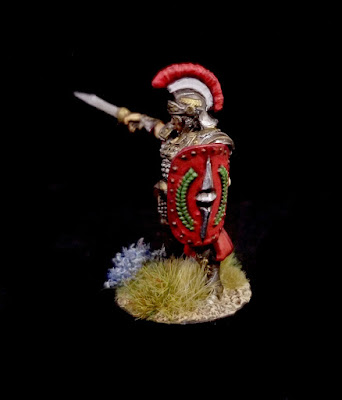 I painted her up in much the same manor as I painted my Greeks, using vallejo steel and bronze washed with earthshade for her armour, and deep reds washed with dark browns for her red fabric. 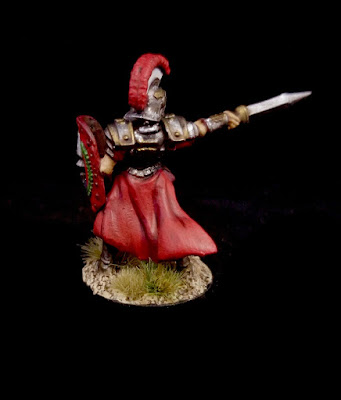 Overall I am super happy with how she came out, even though I have to go back and redo her face once I get to picking up new glasses (getting older sucks and my focus is changing and I need new prescription reader / painting glasses so that I can paint fine details again).  She still looks ok, but it is very annoying when your eyes won't focus like they used to!

Oh, and did I mention, this is a 3d printed figure? I picked up a whole set of great files by a very talented sculpter "Francesca Musumeci" from a kickstarter she ran earlier this year (Amazons) which despite the name came with a ton of other themed figures as well, amazing value for the money. 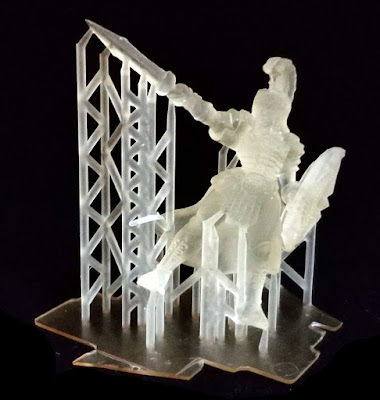 Also in this post is another monster from Kingdom Death, that has sat too long with only primer on him.  I was just never sure what to do with him colour-wise.  He is the Hand of the King and is a royal pain in the @$$ in game. 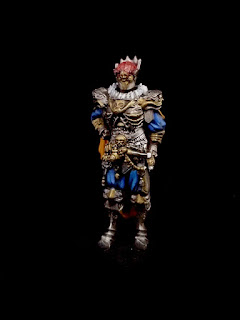 The fight against him is essentially trying to prove your worth to him by hurting him enough that you earn his respect and he leaves you alone, or surviving long enough that he gets bored with you.  In typical Kingdom Death style, neither outcome is good for the settlement, although one is less bad than the other. 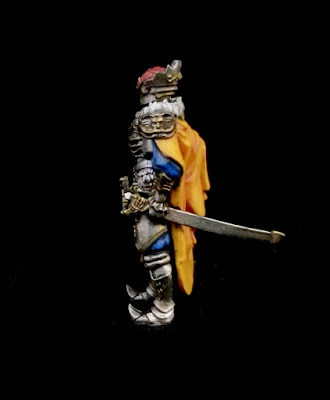 My biggest issue trying to come up with colours for him was that he has an open brain at the top of his skull and therefore I could not do a red cloak, and a royal purple one didn't work either. So he sat... 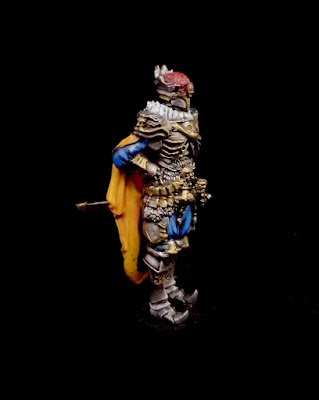 Then recently I saw a picture where someone did his cloak yellow and it just looked right, so it was time to paint him up. 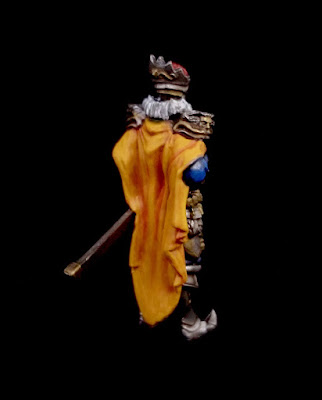 With these two 40mm+ figures I should rack up 14 points plus the 30 points for the visit the Roundwood's Tower.

Fine brushwork once again Byron. It's always great to see new and cool miniatures arrive from your 3D printer. The female centurion looks great - in particular the Vallejo colours seem perfect for armour plates, very nice work. Whatever state your glasses are in, rest assured the output is still impressive.

And yet another unsettling Kingdom Death creature...though perhaps not so unsettling as the last one...at any rate, it's good to see there is one fellow in the setting with an open mind *cough*.

44 points for you, keep up the great work!