From KeithS: Another Medley (110 Points)

Two very different groups of figures for today.  First up is a "Halfling Dozen" - 11 Halfling figures.  Most are Ral Parth scaled for 25mm (they're 18-20mm mostly).  I did much brighter colors than is my wont, in keeping with our the style of our Shire friends.  Not sure how I ended up with so many pairs of them, but I made sure to maximize the color variety. 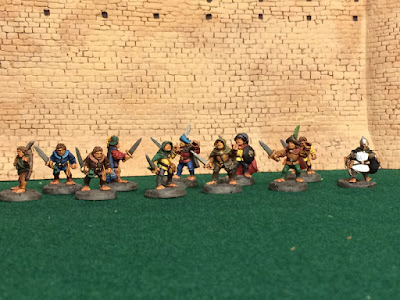 Since so many of them had cloaks, I decided to fancy them up a bit with some trim and decorations.  I rather like the hatch pattern on the rightmost fellow. 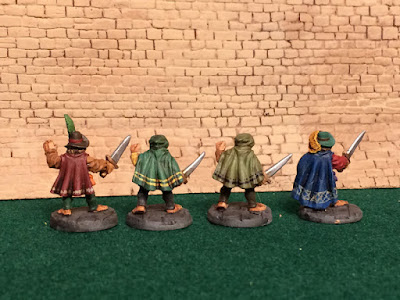 A front shot.  The colors seem to work well for them, though the guy on the right looks a bit sour. 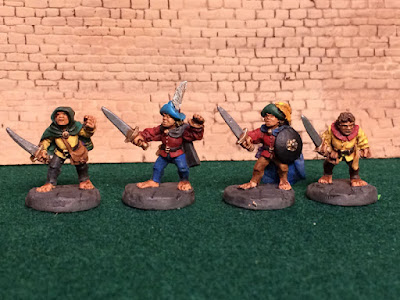 Some more.  The center guy has a "I'm Pippin and I'm a Knight of Gondor!" look about him.  I almost did some heraldry on his white tunic, but decided to leave it a stark white and black. 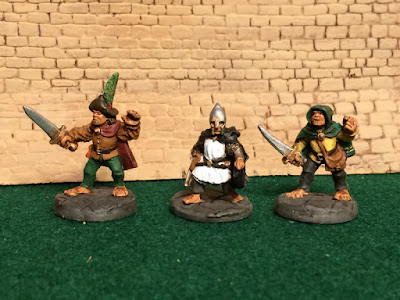 Since my OCD would not permit me to paint an odd number, I did a gnome with them.  This figure is from Lesser Gnome and is around 18-19mm.  He's the company's spokesgnome, or something.  I'm not sure where I got the figure, maybe a freebie from a Garycon in Lake Geneva.  In any case, a nice figure. I more or less went with the color scheme they use for their artwork on their website. 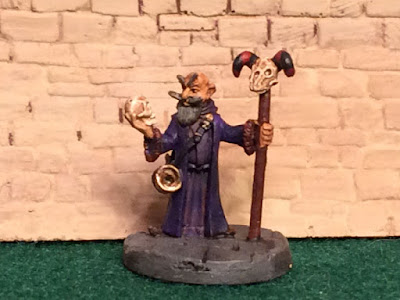 Back angle - I did do some color stripes on the horns atop the staff rather than boring white. 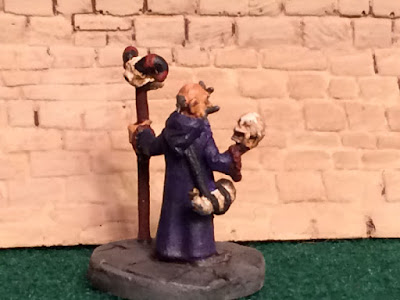 And now for something completely different.


I got a little tired of painting adventurer types, so I next turned to some Reaper Bones figures  I got from their first Kickstarter many moons ago.  They are pretty nice figures, though I am not a fan of the plastic they use - too soft!  First up are three undead dudes with a bit of an Egyptian flair, being mummies and all.  I decided to make them a bit colorful for that reason, rather than the usual dark undead I would typically do.  I like how they turned out.  Height wise, they are 38mm, 55mm, and 40mm, respectively. 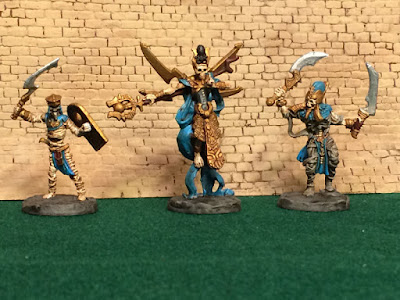 From the back.  I like the bright blue and gold motif and will probably use it again.  The dudes are really huge for use with my usual 25mm, but that won't stop me from introducing some "giant mummies" into my games. 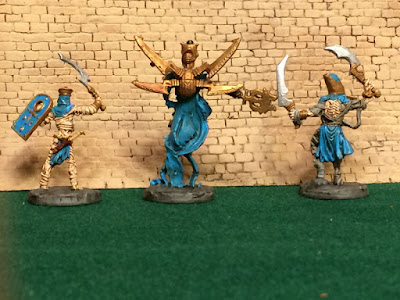 The rest of the undead are a mix of other Reaper figures, with one Ral Partha skeletal dog I threw in just because it was sitting there and needed painting. 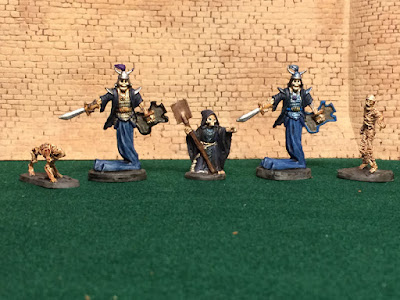 The more interesting three from the rear.  I prefer the brighter shield, I think.  I did those two wraith or lich guys with some variant colors, but I think the bluer one looks a tiny bit better.  Size-wise, these ones are 48mm tall for the big ones, 29mm for the middle guy, and 35mm for the mummy. 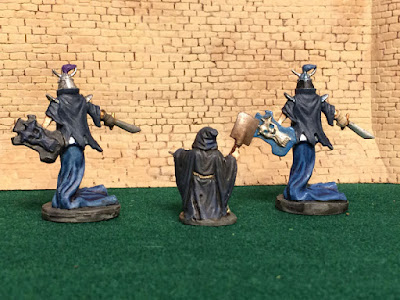 That's it.  A bit of real variety from me for once.  Tough one for scoring since they are all weird sizes!  I come up with the following, but I defer to the wise judges:


Hi Keith - time or our weekly fantasy medley, excellent! Those mummies look great though in their classic turquoise and gold colours, though I sympathise with working with Bones material. The halflings and gnomes are very natty and varied, particularly those with decorated cloaks. I fine these little touches like those are worth the effort in the end.

What's that undead with the shovel all about though? He looks like he's in charge; of what, Dungeon Sanitation?

I'll simplify the scoring a bit, though, with 28mm for the majority fifteen (those halflings might only be ~20mm tall, but we apply the scale they're designed for, in this case 25-28mm), and the five bigger undead I'll put at 40mm.

From IanW: From Russia With Love (94 Points)


Back to 6mm again and more Prussian Napoleonic's. Well not 100% Prussian as the regiments that make up this weeks submission were formed in 1813 as the Germano-Russian Legion.

The 30th Regiments battalions were the 1st, 2nd and 6th battalions of the 1st Brigade and then in 1814 renamed the 1st regiment of the German Legion.

The 31st Regiment was made up of the 3rd, 4th and 7th battalions and was in the second brigade. As such their uniform is a mix of Russian and Prussian and will stand out against all that Prussian Blue.

The main body of all six battalions are Adler Prussian Landwehr as these seemed to be the best match overall. The mounted figures are Adler command figures and as Adler do not do a skirmish pose I have added Baccus Landwehr figures out front.

So I still have over 50 battalions of infantry alone to paint up before I can tick that box. So plenty more Prussians to come over the next few years. IV Corp is almost finished with just three Landwehr cavalry to paint up with II Corp somewhat behind. III Corp is hardly touched but these boys will at least help them out a bit.

As usual I have left flags off the Fusiliers and were not in column have placed them in three deep lines partly to save me having to cut each figure off it's base but also as they did tend to fight in deeper lines that the Brits.

So six battalions with 28 infantry and one commander makes them a convenient 15 points a unit for 90 points to help pad out my 6mm side dual whilst I wait on Lee and Clint to charge up in the next few weeks.


Ah these are great Ian, I do admire your massed 6mm Naponleonics. These have an unusual look with Prussian Landwehr uniforms in Russian green, I can see why you wanted to do them. The flag in orange with the rearing horse is unusual too. Did they see much action during the campaign?

A neat 90 points to you, good sir, plus 4 for the flags of unknown provenance.

Remember Fred? Remember I told you he would show up again? Well I did not tell the entire truth, thát Fred does not feature in today's post. It is his brother, conveniently also called Fred or CGAG-02, makes an appearance here. He has shipped in on board the ARBCO freighter Baroness and is trying to smuggle a dangerous cargo inland.

Fred02 and his band of thugs (Crooked Dice miniatures "The Firm" with one Fred-head replacement) have chartered Captain Jeremiah Barnaby,

formerly of the Alliance Shipping firm now hostilely taken over by ARBCO industries ltd, to smuggle a band of Thuggees (more CD mini's) under the leadership of the Master of the Cristal Orb

and a trio of martial artists (even more CD mini's) into the US.

Here are some more close ups of the ship. It's a TTCombat MDF lasered ship. Their kits are incredibly well made and not that expensive and well worth it. Would I have done things differently putting it together? Yes I would but I wanted it on my table ASAP, so this is it. I left the roof of the cabin and the upper cabin detached from the lower cabin so I could use it for gaming. The containers are separate too, I have 3 more to do and these will be done after the Challenge.

Some more pictures of Fred02 and his friends. One of the gangsters actually has a stocking over his head, but I cannot paint the see-through material, so I made it into a plastic bag. If you can guess from what store it is, I have done a good enough job ;-)

This post amounts to 12 painted 28mm figures and a big ship. The figures are 5 points each so that's 60 points but I leave it up to Phil and Sylvain to come up with the points for the freighter.

Oh gosh Sander, you're throwing us a curveball this morning. that freighter is awesome, I've seen it on eBay, but not picked one up yet. You've done a smashing job detailing up what could be quite plain mdf with that natty white and red colour scheme.

Good morning, hobbyists from around the world! Friday has rolled around once again, which calls for: 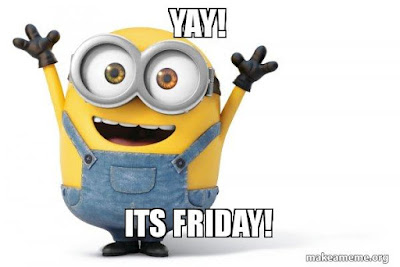 Looks like a quiet week for the Friday crew - perhaps that Terrain theme round has you all flummoxed. Or maybe we've hit 'The Grind'. But Sander has submitted a sizeable vessel for his Pulp collection, and IanW some (P)Russian Napoleonics. That's it so far, but there's still time.

So make a cup of tea, sit back, and come back in an hour or two (well, with two posts, I'm going to have to space them out, aren't I?)

Phil
Posted by Phyllion at 2:52 am 6 comments