Presenting the last unit of my Riders of Doom themed army for Dragon Rampant.  This is a 12 figure light foot unit using plastic GW Chaos Marauders.  These are quite nice figures once you cull all the silly over the top components.   I experimented with some speed painting techniques, keeping the purple colour theme from the other units of the army.   They aren't perfect but I'm pretty happy with the overall result, finishing them just in time to have a submission this week. 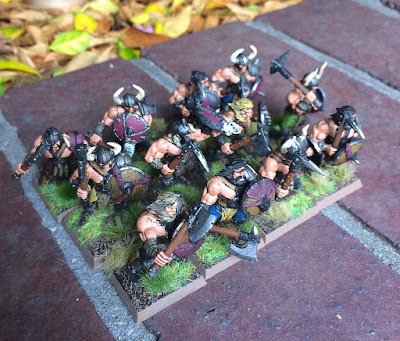 I'm also chuffed to have started and completed a full force from scratch during this challenge, albeit with small unit sizes compared to most massed Fantasy battle games.  My force now includes Elite Riders, Elite and Heavy Foot units, a Champion and 2 Light Foot units.  I'll have to take a picture of the force all together soon. 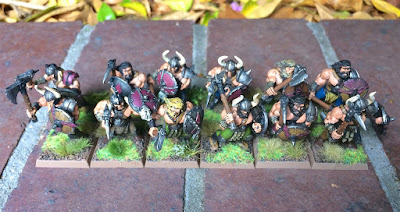 Well, that's 12 chappies that you wouldn't want to meet down some dark alley! I can't see any fur but I do see horns - I hope that they are either artificial or from animals that died naturally, otherwise PETA will be after you!

Side Duels and Challenges Updated 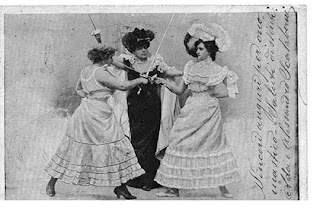 Another points update for the Side Duels and Challenges
has been posted.

Please check and confirm I have things right!

Email ThisBlogThis!Share to TwitterShare to FacebookShare to Pinterest
Labels: Millsy 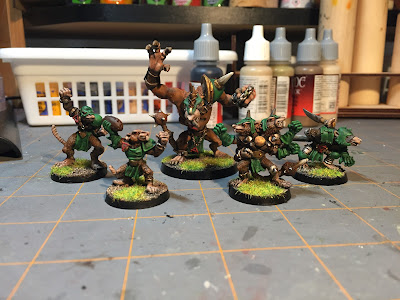 So I managed to finish off the last of my skaven blood bowl team, inc a rat ogre, extra thrower, 2 special chars, and one with long legs.

I had a hard time deciding what to do next. I've had a Covenant of Antarctica fleet for Dystopian wars for a few years now , but hadn't finalized a color scheme.
The Covenant specializes in energy weapons, so I thought to do a weapons glow. with the airbrush this is suprisingly easy to do. They won't be award winners , but I am happy with the result.

Being off the beginning of the week , I managed to crank out most of the fleet. These are mostly done with airbrush, with very little brush work. 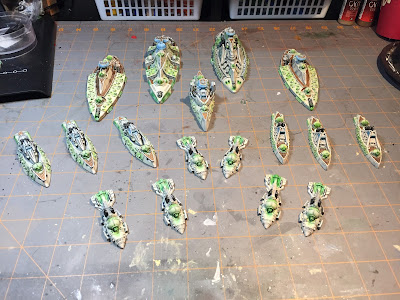 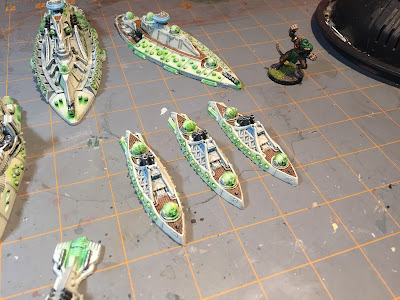 I included a skaven blood bowl member for scale, as I'm not sure how to sore these. ( but that's what the judges are for,...lol) 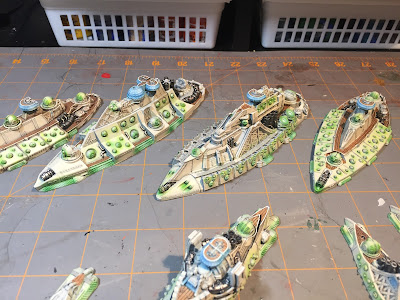 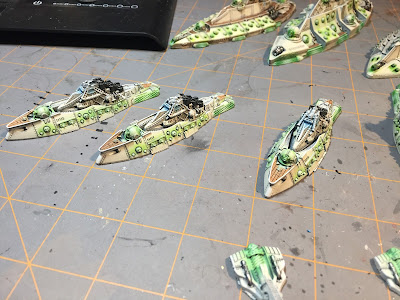 Cracking work Steve! You've done a great job with the airbrush on those ships. I'm going to score the ogre as a 40mm figure so that gives you 27 points for the Blood Bowl selection.

Having looked back through previous Dystopian Wars entries to get an idea of how to score them, I'm going to award 94 points for that fleet which brings you up to 121 points for this submission.

Here is a close-up on 2 SMG stands. Nothing fancy, just that there are lots of little guys carrying submachine guns. 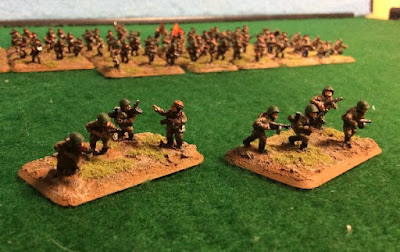 Next are 8 new command teams and two of them include a flag bearer. I just love the kind of anachronism that only a political system like the Soviet Union could produce during a modern war like WW2. That and the dreaded Kommissars! It's interesting how colors completely changed when I took a picture at a different angle with my i-pad. Oh well. 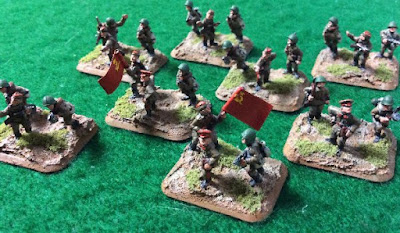 Kommissars bring "political correctness" (ahem) to the Soviet Army, although I can understand that the unlucky soldiers stuck at the front between crack German units and deserter hungry Kommissars had a completely different view on the matter. These 4 teams of political "advisors" will help keep the morale of the troop at the required combative level. 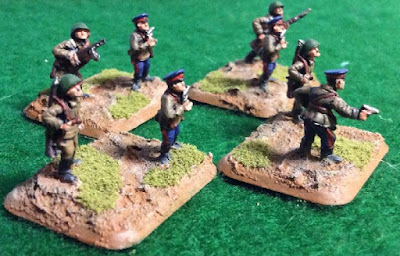 Lastly, a group of three light mortars (probably 50mm) with an observer behind them. We assume that the observer is there for the heavier batteries that the battalion commander keeps in the back, not for the puny mortars..

Finishing these units means that my 15mm mid-war Soviet army project is now completed. I will now refer to the holy spreadsheet and rigorously proceed to the next listed item. Hmmm, let's see...


Congrats on completing your army Sylvain! It does seem that rather a lot of Russians are appearing this year, which is no bad thing! That'll be 176 points towards your target. 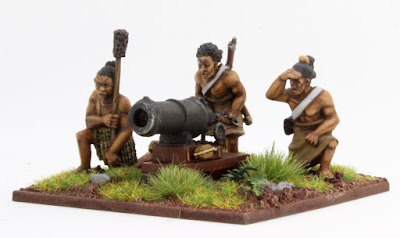 More from the ‘Empress Miniatures’ New Zealand Wars range, this time a captured Royal Navy Carronade and a Māori crew. 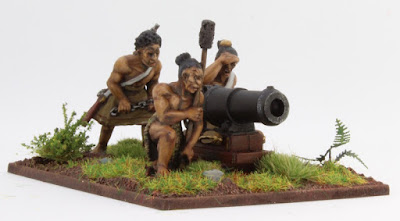 Now I have to confess that I know little of the Carronade other than what I have gleaned from my limited research, but it strikes me as a particularly formidable short range, anti personal weapon, particularly when in the hands of a determined adversary – perfect for defending one’s Pā against the British! 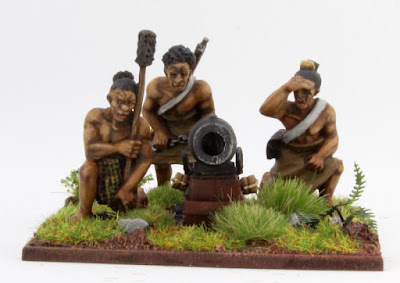 This lovely set comes with three crew members again sculpted by the talented Paul Hicks.  I couldn’t resist having a go at their facial tattoos or more correctly the Tā Moko, perhaps an unnecessary addition given the scale of the miniatures, but something that is so literally ingrained in the culture of the Māori, (Along with the Silver Fern placed at the front of base) that I thought that it was worth the effort.


Lovely work as always Michael. I must confess that this is a period that I know very little about.

To the base of 25 points for these I'm going to add a couple of bonus points for making the effort to paint the Ta Moko designs on their faces.

Tamsin
Posted by Michael Awdry at 4:00 am 24 comments

I'm not entirely sure about being called on to cover a weekend shift - it plays merry heck with capitalising my post titles! It was much easier to get the alliteration last year when I was the Tuesday Minion. 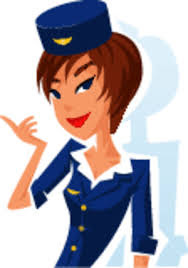 "Good morning ladies and gentlemen, this is your friendly stand-in senior flight attendant Tamsin. Thank you for flying Flight AHPC7 from Challenge. Our pilot, Captain "Snowlord" Campbell has asked me to step in today so that he can focus on some Home work. I must say that after last year's flight I was dreading the state I'd find the crew lounge in - PeterD always left it in such a mess with empty fizzy drink and beer cans, half eaten pizzas, piles of sweaty socks...however, young Philip and master Sylvain seem to have left it in a very acceptable condition.

"A simply amazing 96 passengers and crew have boarded with only four no-shows. My understanding is that two of them were arrested following an altercation about how many buttons were on the trouser fly of Zwarinsky's hussars for the uniform issue of February 1834. I can inform you that both were in fact wrong - there was no February 1834 uniform issue to that regiment. Hah!

"The third missing passenger is, I regret to inform you in hospital after a PETA activist saw him openly displaying a Space Wolves army.

"The fourth is currently being questioned by various law enforcement agencies after budgies and sandbags were discovered in his checked luggage. Inside sources report that he keeps claiming that "that bleedin' Badger must have sneaked them in there to smuggle them into the Challenge". The sources suggest that a worldwide search for someone with the initials "RR" is under way.

"To bring you up to date with how the flight is going, we are currently cruising at 40,059 points with a target altitude of 75,650. Good golly-gosh my word! We're a little bit over halfway there and don't appear to be living on a prayer!

"Today is, unless my mathemagics is mistaken, the halfway point for this flight. doesn't time fly when you're having fun?

"There are a few delicious entries for your delectation today in a variety of sizes. Please do remember to show your appreciation by leaving comments.

"Before I go to do my duties, a quick reminder that Nurse Docherty will be around at some point with the medications. Rainbow crayons (noses, for putting up) can be found in the pocket under your seats.

"I hope you enjoy the remainder of this flight!"

Tamsin is at the Controls Today... 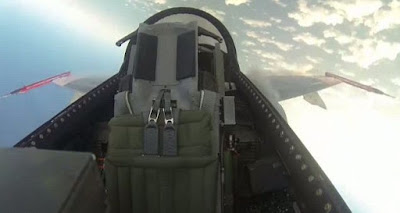 Continuing on our biweekly feature of 'Famous Minions of Yesteryear,' Tamsin will soon take the controls for today's submissions. I, in turn, will try to get my 'Home' entry done and the theme round sorted.

You're in excellent hands, folks. See you all tomorrow!