Reminder: This week is Open Season on Submission Entries

I just want to remind all the participants that for this first week of the Challenge you can submit as many entries as you like, when you like.  We will commence the established submission schedule starting next Friday, December 12th (12:01am CST).  Let's roll. 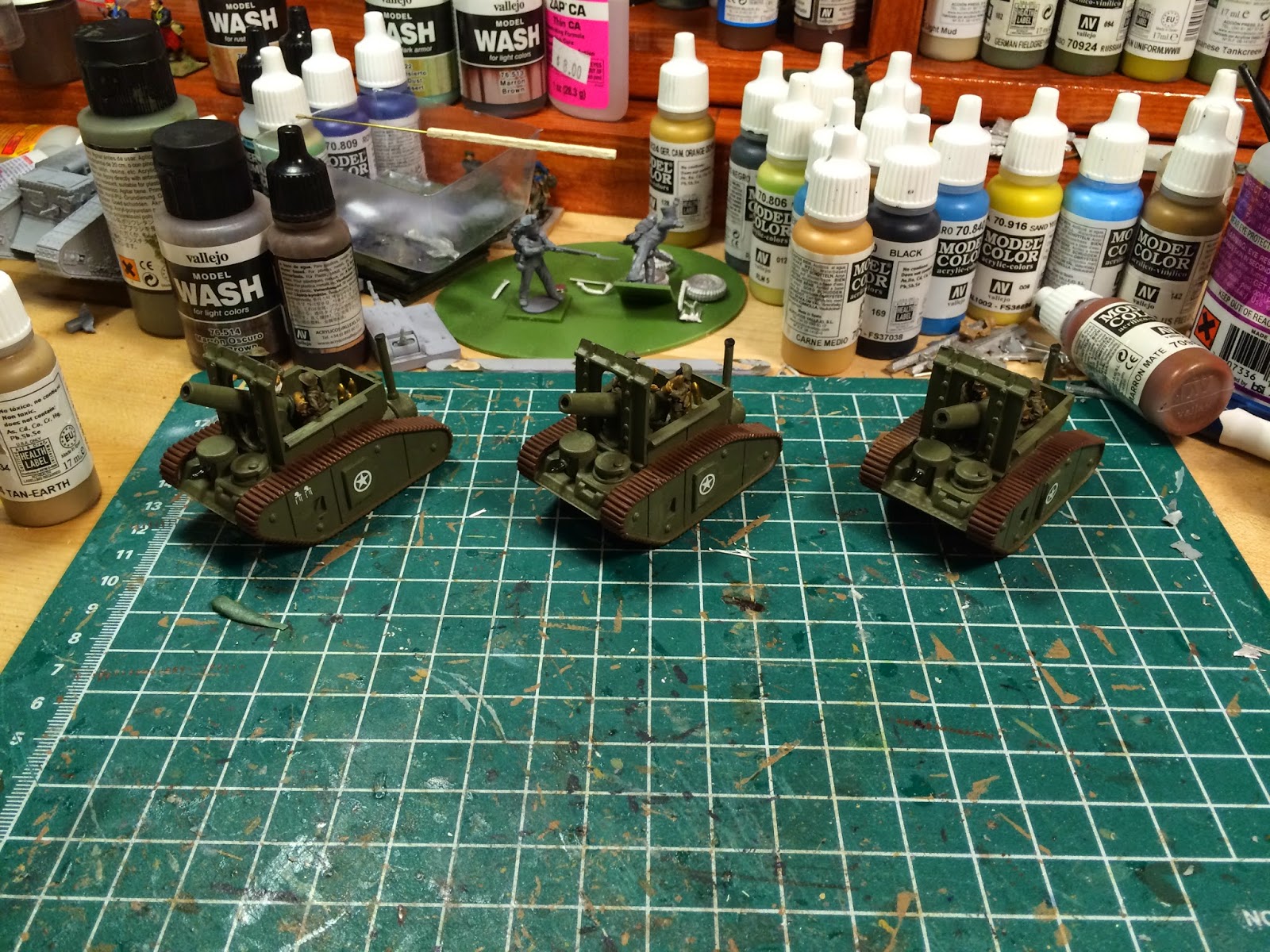 Here is my first entry of the Analogue Hobbies Annual Painting Challenge V or "AHPCV" as the "cool kids" refer to it.

A unit of US mobile artillery from the new game system All Quiet on the Martian Front.  The miniatures are 18mm scale and are plastic and metal. 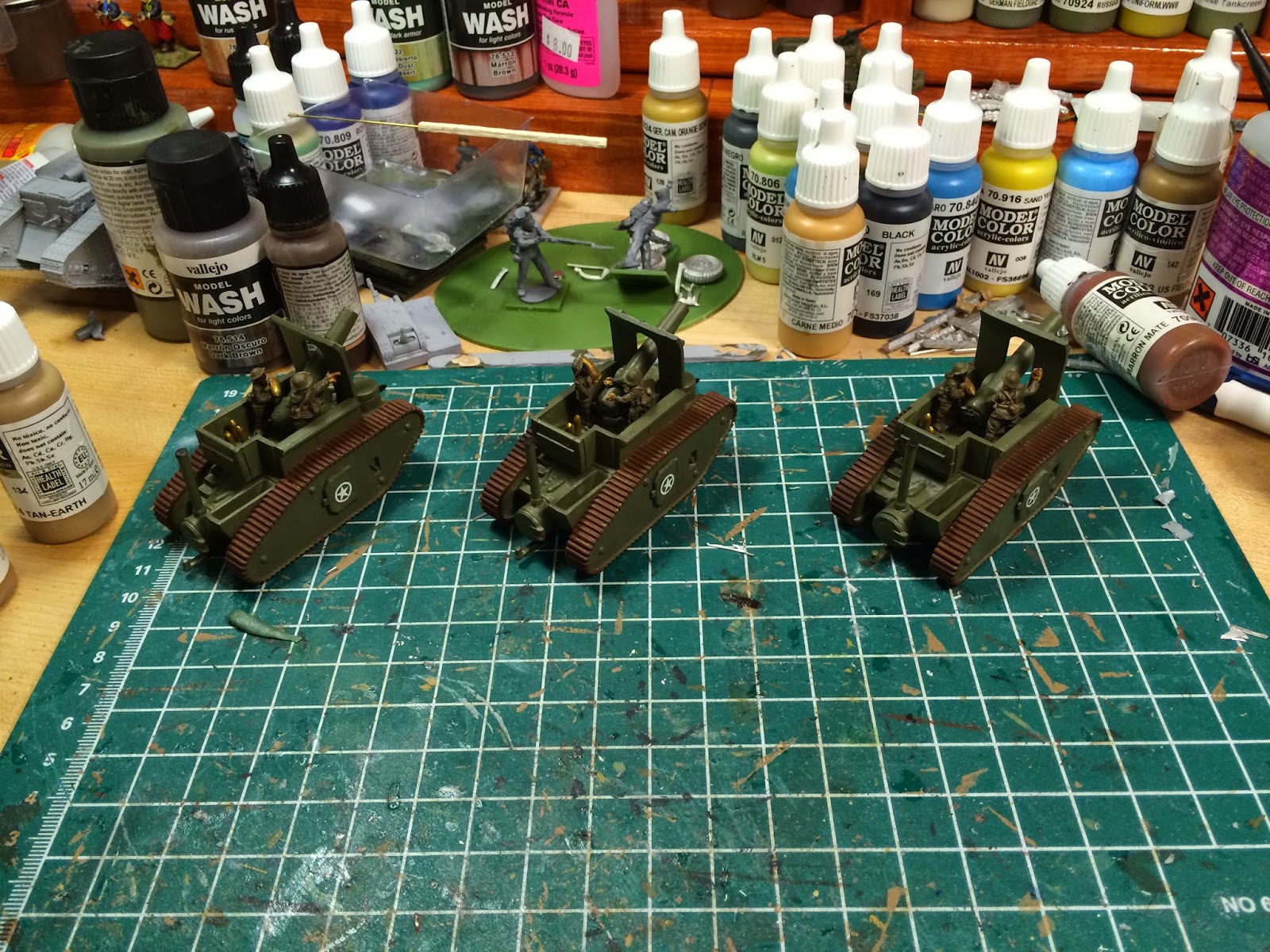 Just like in the H.G Well's original "War of the Worlds", heavy artillery can be effective in taking out a Martian tripod and this unit has managed to take down 2 of the those three-legged menaces.  Each vehicle has two crew members and some extra ammo for the storage racks. 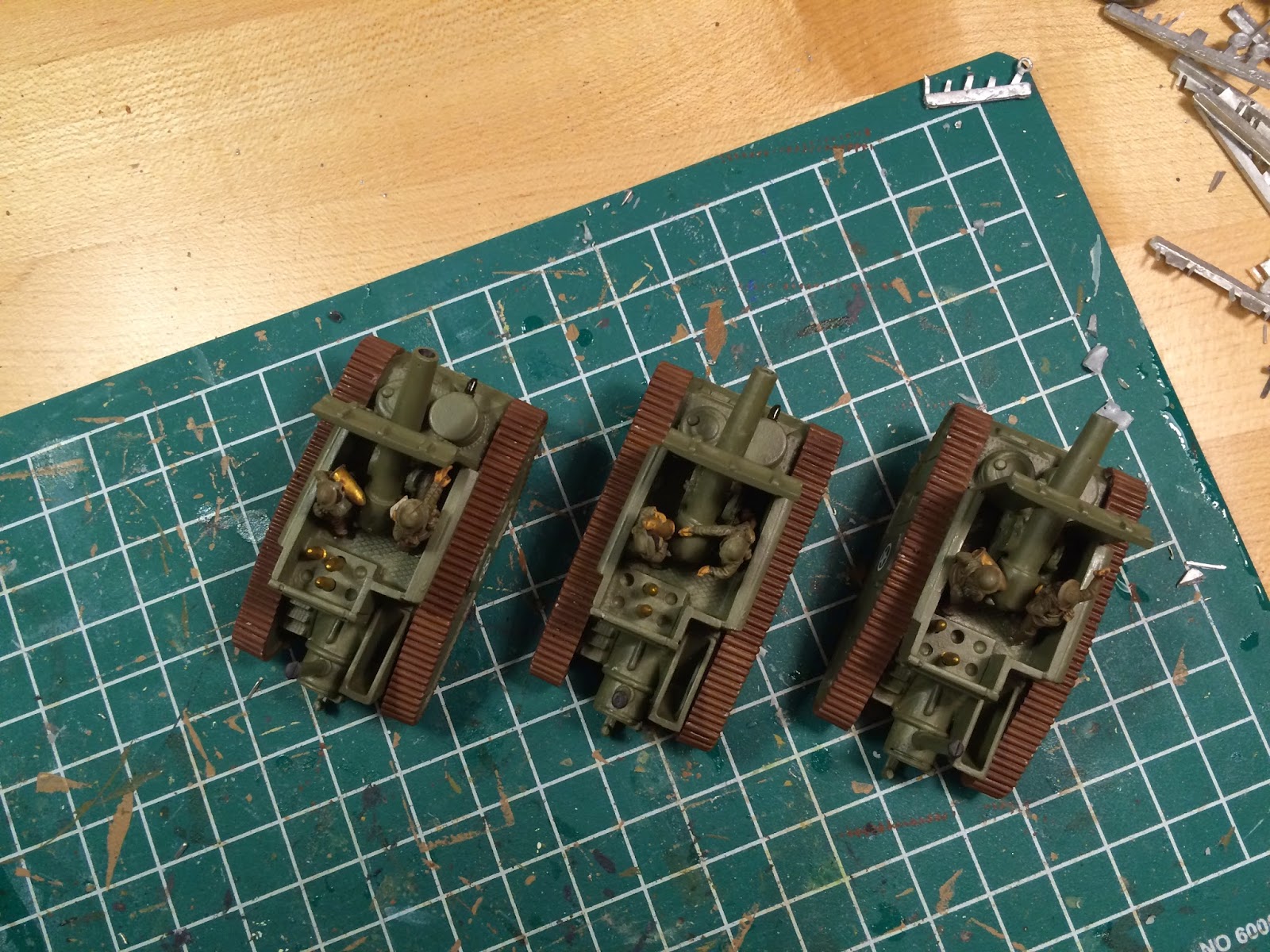 I do need to point out that my first submission wasn't in the grand spreadsheet until week 12 - I've never been all that keen on the whole rules following thing.

The 5th Annual Painting Challenge Begins - The Death of Boromir from J.R.R. Tolkien's 'The Lord of the Rings' (5 points) 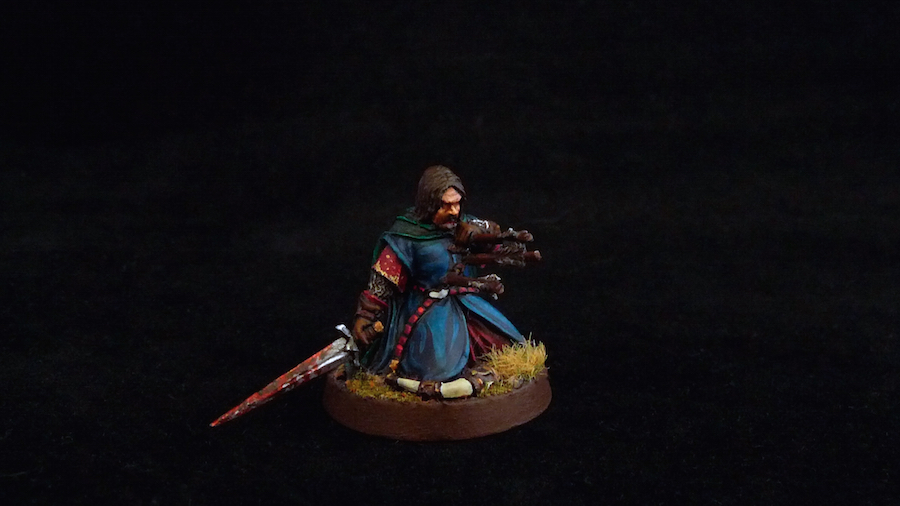 As per tradition, I’ll open the Painting Challenge with its first entry, and since this year’s central theme is ‘Antiheroes, Rogues & Ruffians’ I thought I’d lead off with one of my favourite antiheroes from modern English literature: Boromir of Gondor from J.R.R. Tolkien’s ‘The Lord of the Rings’.

I realize claiming Boromir as an antihero is a bit contentious to some as his place in the Middle Earth mythos is still hotly argued amongst Tolkien fans and scholars. Nonetheless, as the definition of an antihero is (and I paraphrase here): ‘a protagonist of a drama or narrative who is often lacking in classic heroic qualities, not entirely pure, often perceived as a flawed hero’, I think that Boromir fits the role of antihero admirably.

Though in the book his contemporaries regard him as a great captain of Gondor, a valiant warrior and a bitter foe of the Dark Lord, we find Boromir is willing to betray the Fellowship by attempting to forcibly take the Ring from Frodo. His vanity in thinking he had the power to control the Ring, that he could force it to his own will, was his tragic flaw – his hubris, which I think makes him a classic antihero. In the end, Boromir pays for his treachery with his life, while at the same time redeeming himself, in his attempt to defend Merry and Pippin from the orcs at Parth Galen. 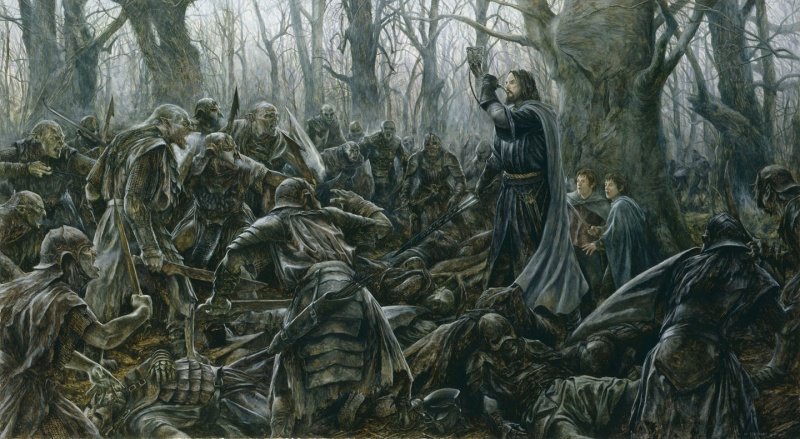 During my first reading The Lord of the Rings, as a typical angst-ridden teenager, I was quite struck by the pathos of Boromir’s character. He seemed to me somehow more human, more accessible, more real than the other characters who were either larger-than-life or far too pure for me to identify with. Though his actions certainly upset me, I could still understand where he was coming from – flaws, vanity and all. So when I came to the part where he's fatally wounded fighting a host of orcs I was deeply saddened, perhaps even more than his treacherous act which led to the breaking of the Fellowship. All in all, a great character and perhaps a classic example of Tolkien’s jaded view of our modern age. 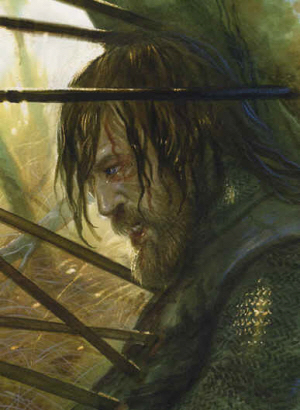 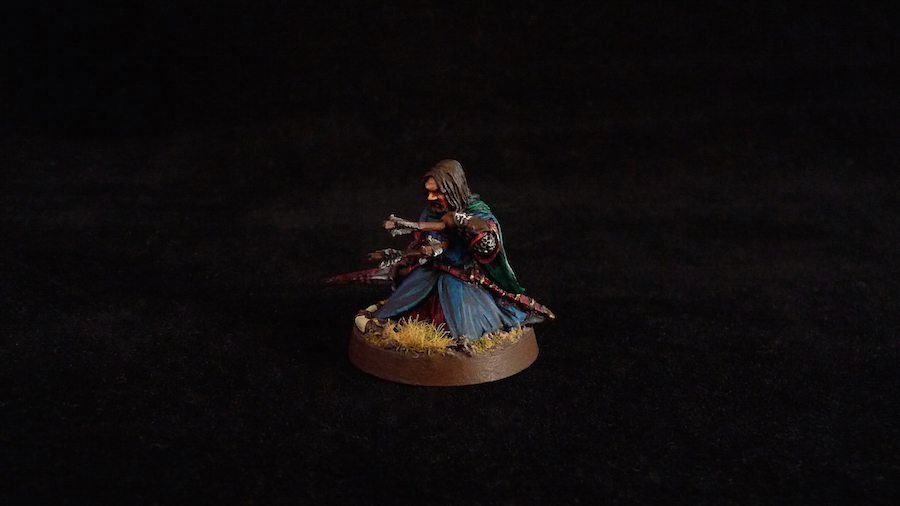 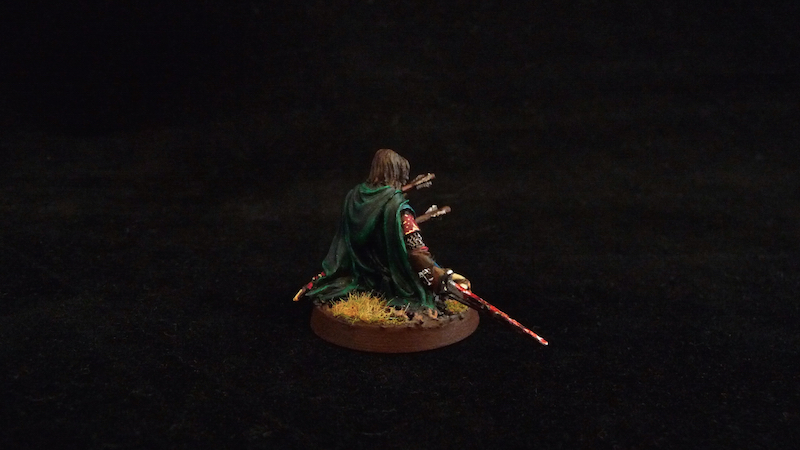 This model is an older casting from Games Workshop’s early efforts in producing miniatures for The Lord of the Rings. I remember that when I first saw it I knew I had to get it as it brought back many fond memories of my first reading of the books. (In fact, I already have one of these painted, but thought I’d do another up for The Challenge.) The two orcs carrying Merry and Pippin were painted years ago so they will not count for scoring (but they cried out to be included, and who was I to deny them). 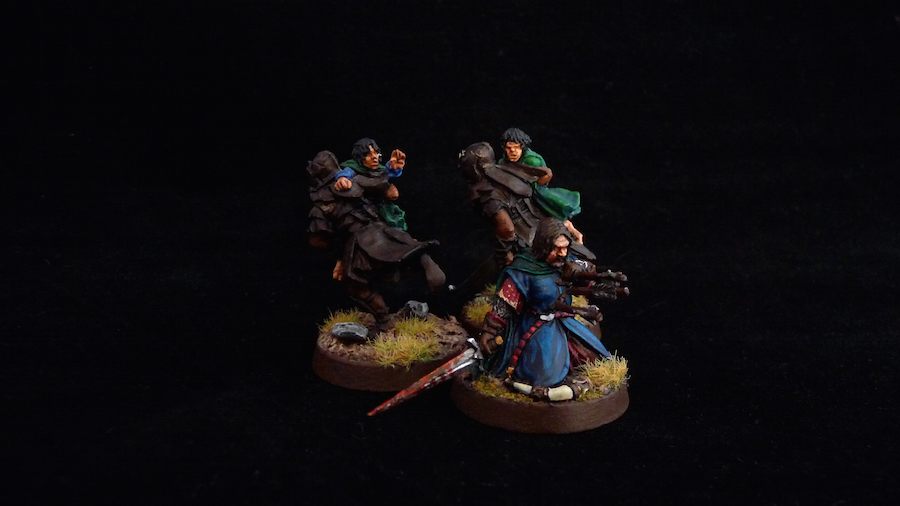 So there you have it, the opening entry to this year’s Painting Challenge and my personal welcome to you all. I see that other entries are already beginning to come in, so please come back and visit us again and see what the participants have created!