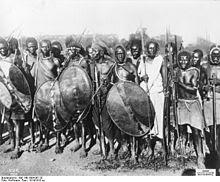 I have to say that I am really enjoying painting this diverse group of figures from Wargames Foundry for the ruleset Congo. The paint just falls on them.

Up next is some groups a little lower on the pecking order than the Askaris I presented last week. This time I have gone with very muted colours, these chappies are just out of the bush looking for adventure.

First up is the Ruga-Ruga. These men are the orphans of their tribes, left to fend for themselves. They are the mercenaries of the expedition age, hiring themselves out to whomever will pay. They are undisciplined but not lacking in courage. Armed with muskets. 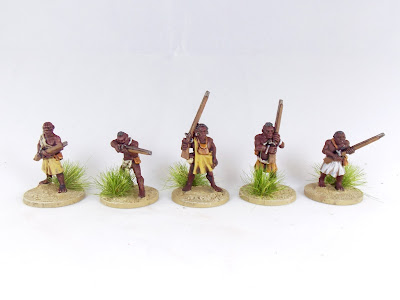 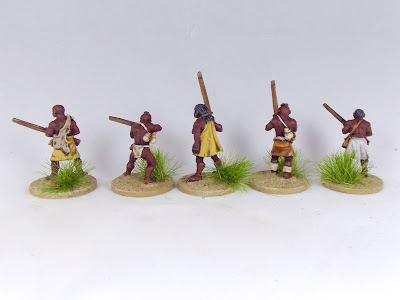 Next up is the Young Warriors. These are young men of the African tribes, they join up looking for adventure, experience and glory. Armed only with spears and shields. 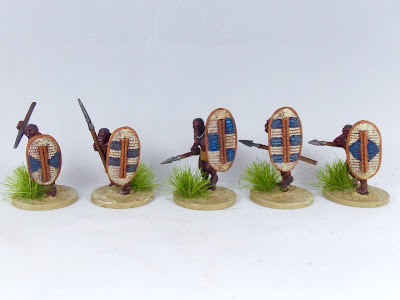 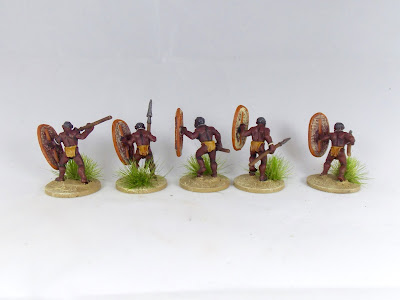 So another 50 points which I believe will push me over my goal. I actually never thought I would find the time to paint up 400 points for this year's Challenge. I was hoping to have my next detachment and supports of Blood Angels done for Epic 30k, but alas I was missing one vehicle to make up the grouping. Fortunately, I was able to find some on eBay, and they are now on their way to me. I am hoping to able to put them up next week. I am planning to finish off the Challenge with some left overs from last year, but we will have to see.

ByronM: Another great entry for your Congo game John!  The skin tones are really nice as are the shields and clothing.  You make it hard to not get into this game!  Keep up the great work and hopefully we get to see more either in this challenge or next year.  I still want to see what you are going to use for jungle terrain too!
Posted by john de terre neuve at 1:42 pm 21 comments

I haven't posted much lately - I hit a long bout of painter's block that it took me entirely too long to realize was because I was bored painting chainmail and white surcoats and needed a break from my Teutonic knights.  Once I sat down with something different - Reaper Miniatures' "Griffon," from their Bones line of plastic figures - the mojo started to make a comeback, and I'm very pleased with the results. 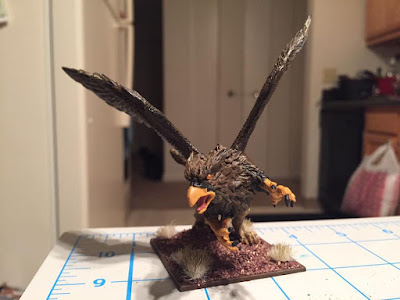 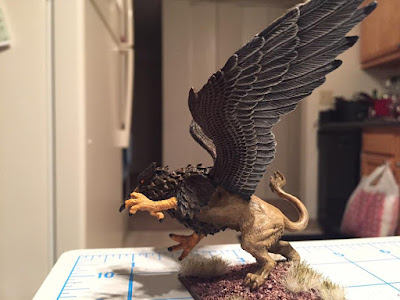 I don't know that I have too much to say about him - the color scheme is nothing too outrageous, with tawny hindquarters and dark brown feathers based primarily on the golden eagle, though the lighter shades on the wings are more hawk-inspired. 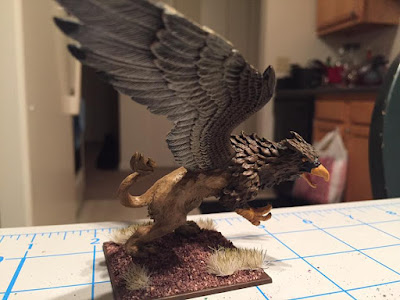 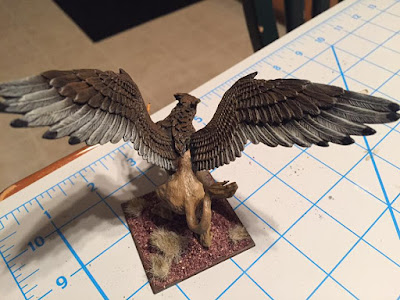 My half-painted Teutons have begun to pull double duty as a "Kingdoms of Men" list for Kings of War, and once I have a suitable rider painted up this will be the "Winged Beast" part of "General on Winged Beast," to command my army and terrorize enemy war machines and back ranks.  To this end the Griffon has been mounted on a 50mm square base.

ByronM: That looks really sharp Bill!  I like the shading on the feathers and the lightening of the trailing feathers gives a very realistic look.  I have never worked with the Bones stuff and have heard mixed reviews on them, but this model looks great and your paint job is really nice as well!
Posted by Bill at 1:33 pm 17 comments

I have not been painting so much Odds and Ends lately as I was supposed to, participation in the local AoS Escalation league has "forced" me to paint some Chaos. Well, the league ended last week, I finished fourth with only one victory, but several hobby points for painted models, round bases etc. I still have some miniatures to finish to my level, even though they were all on the table already.

Here are 5 Chaos Knights, not armed with feared lances, but mediocre axes and swords. On the game they were doing what I expected, but the opposing Screamers were just too much, kill one and two new are spawned (some Tzeentch trick). In the end I managed to finish them, but that's all what they managed to done in the game.

The standard bearer was started and almost finished before the challenge, so he does not count for challenge points. In general I'm happy with them, but the shields are not what I expected. They got too messy, they looked better when half done, actually. :) Of course from the distance you don't see a thing, but it irritates me a bit. Anyway, they are finished now.

I used red glaze on some of the horses to give them more demonic, evil, Khorne look. Not bad, but not very visible either. I also decided to paint some black and some brown horses instead of all black, which is so familiar with Chaos Knights.

They are plastic horses with some metal parts and metal riders. Older GW models all.


Then something different, but Chaos as well. These are Odds or Ends, because they are all what I have of them and now they all are done. They are Broos from Glorantha. In other universes they might be called Beastmen, which is quite odd, because goats, sheeps and other farm animals are not very beasty to me...

I got them from a sale years ago just because I used to play RPGs in the Glorantha (RuneQuest at that time) as a teenager and I really liked to world. I have bought some newer books (HeroWars and later HeroQuest - not the boardgame) every now and then, because I just like the world.

I don't know much of these, they were in the box labeled "RuneQuest Broo Selection" and I they are manufactured by Mongoose. They are all metal and those shields were separate. They are not overly detailed, but there's enough to make them other than fur and cloth.


I should have probably used more colors on the clothes, now they look a bit too uniformed, I think. Or at least use yellow less and others more.


Pointswise this is 4 mounted and 8 standing 25/28 miniatures, so a whopping 80 points!

ByronM: More old school GW stuff, is it just me or do they look so wrong mounted on ovals and rounds!  Not anything to do with you Teemu, just feels to odd to not rank guys up for GW fantasy, just this grouchy old man talking though.  The figures themselves look good, and I especially like the beastmen at the end of the post.  They look like cool little scupts that have a lot of character.   The overall picture of the army as well is nice, you have gotten a long way on it over the course of the challenge, congrats!
Posted by Teemu Laaksonen at 1:13 pm 18 comments 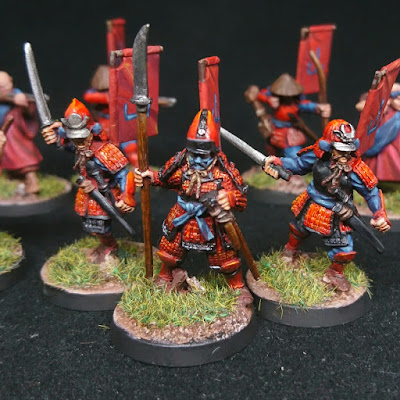 All quiet on the western front these days.. so we will switch to the eastern front instead!

Been incredibly busy with work, and a soon to be house move ( didn't I do one of those this time last year? )... but I have had a chance to get in some painting of some gaming models.

With Warlords promoting their new game Test of Honour, the local scene is quite enthused with it, and looking forward to it arriving. Though the game is not out, I realized that I had some Samurai models kicking around. Actually they were built and ready for LAST YEARS competition for being painted up and never got touched :(

But with this game coming, it was a good time to dig out these models then and give them a go at painting! 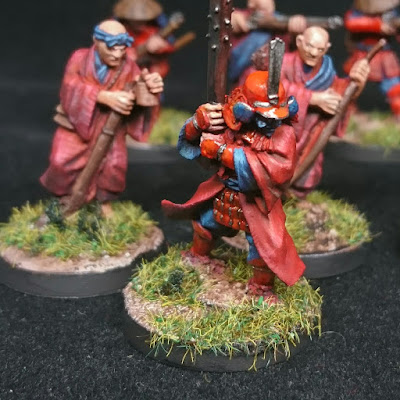 The models are ones from Northstar and consist of 2 different bands that they provide for their Ronin game. But I think overall they mix well enough, and since the ToH game treats anything not a samurai as a commoner.. it should be ok.

Though I do have too many Samurai at the moment, I think it will be ok. Or at least give me some flavour to seeing how I wish to play them. 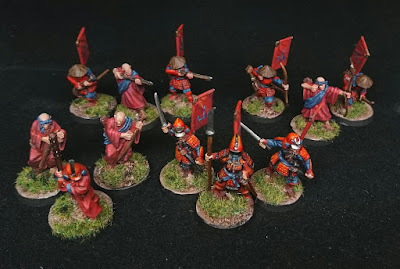 At present when I was doing the first batches of them, I got the first 12 models completed. Giving me a Damiyo, 2 Samurai retainers, 4 with Muskets, 4 with bows, and a Ronin with a Kanebo... I still have 5 more with spears/polearms that got finished up afterwards. 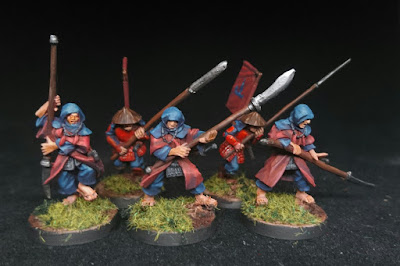 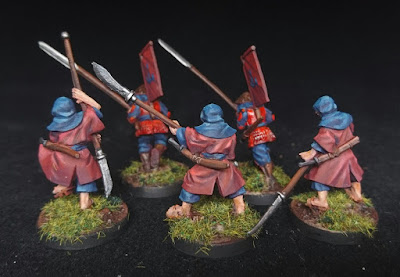 Color scheme is not so historical, but was fun to paint up. And I just felt like painting red! :) The blue being an accent color for it.

The clan I have named after my high school teacher, Mr Yamamura, who unfortunately passed last year. So all the banners have Yama, or Mountain, as its symbol to honour him.

Much fun was had with painting them up, and just now hoping to see how they will do when the game gets released. But it does give me a reason to pull out all the Japanese buildings that I bought for my IJA forces in Bolt Action last year as well.

17 models of 28mm scale in total. And when the game gets released, I will have many more to add to it to make a much greater variety for me to play with! But what I do have at the moment is enough to start almost immediately for many of the scenarios that are already known!

ByronM: An excellent looking force here Kyle and one I am sure that your old teacher would have appreciated you naming after him.  The colours are spot on with lots of great shading and transitions.  I really like the muted tones on some and the brighter tones on others.  It all looks great.   I had not heard about this new game, but since I already have a pile of Northstar and Perry Samurai figures, I may need to check it out.
Posted by MrLee at 11:21 am 13 comments

Twelve worked-up monks take the field for my burgeoning Saga/Lion Rampant force. No doubt they've helped themselves to a little of their Monasteries home-brew and now feel they need to make a point, preferably with something sharp.

These guys are 28 mm figures from Gripping Beast. They were very easy to paint up, they are after all, basically a robe with a head and hands sticking out. Unfortunately, the castings weren't great, and a few have melted faces. It can get pretty hot out in the desert I guess... 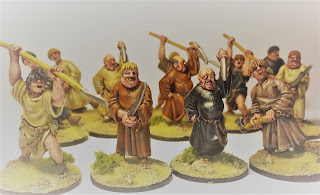 All up that should be 60 points, and now that I've got my final theme round already finished, it's back to trying to finish the last two units for this army before the final curtain call.

ByronM: Very nice work Steve, I really like how you kept everything dull and muted for your colour choices.  It makes them look far more authentic and worn than brighter more saturated colours would.  Sorry to hear about the castings, I too have found Gripping Beast metals to be really hit or miss so its not something new. This rag tag unit nets you a nice 60 points towards your score, great work.
Posted by Steve at 8:12 am 21 comments

Good Morning everyone and welcome to another Wednesday and the first of March!  Wow, that snuck up on us, didn't it.  That means only 19 painting days left until the end of the challenge, so everyone should get their brushes into high gear for the dash to the finish line. 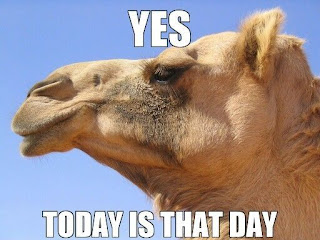 This week we have a bunch of painted goodness coming your way, including:
- A Griffon
- Chaos Warriors
- Samurais
- Monks
- Congo Warriors

Try as I might though I could not find any Halflings up for posting, they are really short and tricksy though so they might be around here somewhere, I will keep looking.

Oh and for all those in the IT field, don't forget officially.... 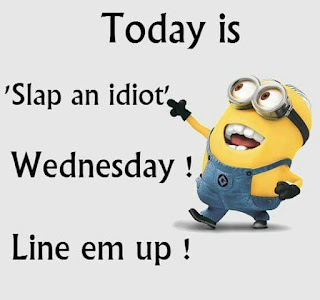 And as all of us in the IT field know, that covers a lot of people! :-)  So go have some fun today!