These figures have been sitting around here for a while since the Spectre Kickstarter ended sometime last year and the figures arrived.  I had been holding off painting them until this challenge rolled around, and until I could come up with some cool looking African / Middle eastern buildings to use them with.

Spectre Miniatures is a small company that focuses on modern 28mm figures and did a few Kickstarters in the last little while.  Since then they have also expanded their ranges significantly and have a whole pile of ultra modern miniatures for use.  The detail on the figures is extremely good and the figure quality is very high.  If I had one complaint about them, it would be in their attempt for detail and accuracy they have kept the guns the proper scale.  While fine in theory, in practice it makes them look really small as well as very fragile.  I did have a few show up broken though, and they were quickly replaced, so hurrah for customer service!


Anyway, I have done 20 of the African Militants / Militia up so far with more African and Middle East militia to follow shortly.

Since most modern games that these are involved with will have a huge number of militia vs a very small number of professional or elite soldiers, I chose to do these as a very fast and basic table top level.  I will spend more time on the 4-6 elites that face off against the 30-50 militia, but just couldn't justify a ton of time on all the cannon fodder. 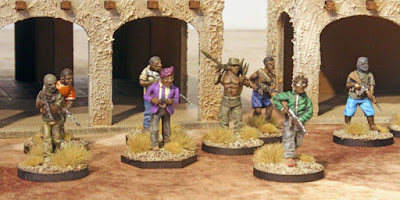 All I did for painting them was prime black, base layer all the colours, wash with a dirty brown/black wash, and then highlight.  I then went in and did a few small details like the NWA (Niggaz Wit Attitudes) shirt which I thought appropriate, some shiny white / bright colour hightop runners, and bright coloured flip flops and Croc's since that is obviously the proper footwear to enter battle with.  To finish off the crew I painted the leader of the militia in a purple suit with matching purple hair, as it seemed a very militant thing to fly in the face of all fashion sense. 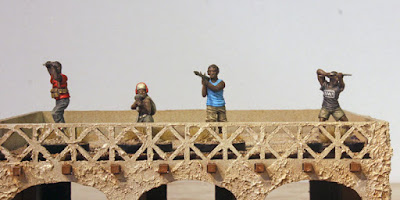 I love the different poses, clothing, expressions that Spectre put on all of these figs, it made them a blast to paint.

20 militia should net me 100 points for my total and towards the Modern challenge that I am in.

Very nice Byron, you can almost hear the chants as they work themselves into a frenzy. Great mix of colours to give variety. Now will they be backed some "technicals"? I have not seen this range before they are tempting... must resist,,