From MilesR: The Final Stat Round Up NEW & Improved!

Yes dear friends, it's time once again for me to don the garb of a mysterious "Mathamagician" and delve into the dark arts of statistics to divine if our efforts have pleased or angered those capricious painting gods.  Gather round our virtual campfire and gaze, amazed, upon my efforts.  I shall call upon the the power of light with the use of addition and subtraction.  I shall contest the powers of darkness through the use of multiplication and division.  I shall raid your retirement funds through the use of financial mumbo jumbo - oops wrong ritual - lets forget that last line, shall we? 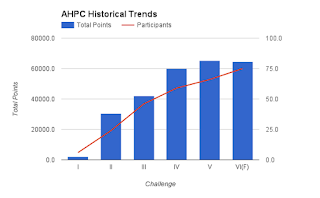 So how did we do this year?  A total of 72 out of 88 registered participants produced a total of 64,690 which essentially equals what was produced last year, despite this year being 2 weeks shorter in duration.  That's pretty impressive.

What, you want, nay, you crave more inane details?  Well I'm just the guy you need to see about that.

I was very surprised to see the scores more evenly distributed in Challenge VI - with the Top 10 contributing 33% of the points vs 41-42% in the previous years. 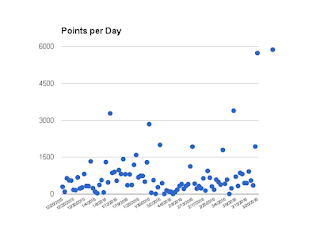 Points production per day was relatively constant with the exception of the last day which saw almost 6,000 points get submitted - wow.  Most of the big spikes over 3K are caused by our grand and illustrious leader entering the bonus rounds in bulk and sadly without scale detail AKA "the Purple Stain".  I am sure his data accuracy transgression will not have please the painting gods. 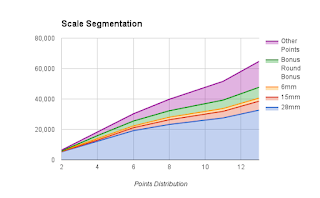 In terms of points by scale, it's clear that 28mm continues to dominate with with 55% of the attributes points.  The actual number is likely closer to 70% but we'll never know due to the abomination of the Purple Stain.  Why some people hold on to the delusions that anarchy is somehow better than rigid adherence to rules is beyond me.  Perhaps I can ask Mr Trump to consider adopting "making points calculations great again" part of his platform?  Given all the random crap he's coming up with it's not as farfetched as one might think.

But enough statistical foreplay, lets get on to the main event - the big, the intimidating, the astounding AHPC VI Key Performance Indicator tracking table - to tell you the truth "big data tables" make me feel a little giddy and light headed.  Some of you with more delicate quantitative constitutions may feel the need to swoon now - it's ok we'll wait a few minutes....


What can we derive from this mathematical masterpiece of obfuscation?  First I was surprised to see 15mm really not have that big of an impact in terms of points - it's 28mm or go home in this competition.

Production per biweekly segment was relatively constant excluding the mad rush at the end.  During the competent there were 811 total entries at an average point level 80 points each.  The total point forecasting model proved to be rather accurate and honed in on the total point production by week 8.  To be honest, I'm rather surprised it worked because I used the same model I had in 2008 forecasting mortgage delinquencies and that didn't work out all that well.

Given that we have the spreadsheet of doom tracking everything (and I mean EVERYTHING Ray R - you should be ashamed of yourself) we can also look at participation and productivity on a geographical basis: 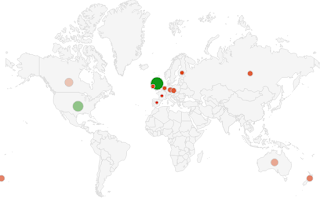 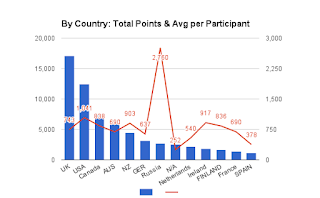 If we look at national unit productivity, we see a much different picture with Russia at the highest and  the US taking a decisive lead over it's former colonial tormentors.  It's also nice to see the wonderful island nation of Ireland tower over it British neighbors in productivity.  To paraphrase from Audi, "There is truth in painting".  I'm pretty sure that Audi and their VW parents aren't using that tagline for awhile.

Australia doesn't do so hot but then again the weather's nice right now.

Economic Impact
I'll end this tome with the part you've all been waiting for - what's the economic impact of the Challenge?  Or should I say.....

Yeah, baby, SHOW ME THE MONEY!

First a word on the methodology,

The total points (64,690) are adjusted into the equivalent number 28mm infantry figures by dividing by 5, which gets us 12,938 miniatures,

But wait there's more, none off us replace one figure with another so there's a multiplier effect for every figure we paint we have this irresistible urge to replace it with 4 more - that's an economic velocity factor of 4 that needs to be applied to the direct benefit (trust me, I'm a financial services professional).  So the true economic impact of the Challenge for this year is $569,272 !!!!!!!!

But what if we totaled the cumulative economic impact of all six challenges to see the true economic juggernaut that Curt has unleashed upon our sleepy little hobby - well through the awesome power of the spreadsheet we can and we did:

It adds up to $1,922,708 - oh hell we're all friends, lets just round it of to a cool $2 Million buckaroonies.  If only Curt had taken my advice about adding in the revenue share cut in the terms and services disclosure..... 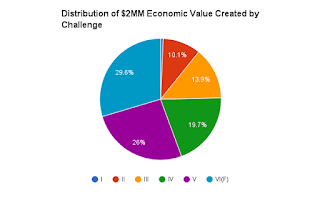 Hey wake up! - this is exciting stuff.

The Hall of Heroes:
As we bring this year's statistical wrap up to an end (I'm sure all of you want more) we must pay our respects to the Hall of Painting Heroes in Vallejohalla:

Yet again we see RayR perched at the top of the heap sunning himself like a beached elephant seal for all to see - ugh I deeply apologize for the visual images.  Despite societal mores about public display, his mark of 4,940 points in a single challenge may well stand forever.  Yes RayR is the true "alpha painting male" in our little subspecies.  I shall let each of you ponder those implications to our collective chances on the evolutionary scale.

Scandal! Shame!
It is my sad duty to report that the arcane rules and special incantations required to be performed to award the coveted Greatest Improvement in Miniature Painting (the GIMP Award!) have been confiscated by PETA due to their narrow minded concerns about animal sacrifice.  Without completing the entire ritual it is impossible to make the award this year.  According to both the bylaws of the League of Challenge Painters and our deep sense of Fair Play, the recipient of last years award retains the title for this year - Congratulations Millsy, your are our GIMP and retain both the title, honors, duties and uniform that go along with that august mantle.

Yes, I do think the painting gods are happy with us, don't you?