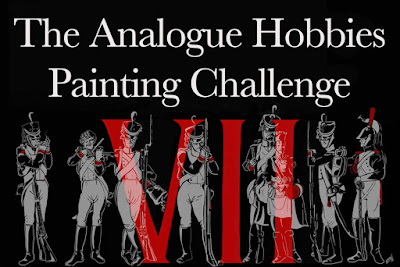 'The Seven Men from Gascony' by R.F. Delderfield describes the life and times of seven men and one very tough, intrepid woman, who were brought together during the Napoleonic Wars. The characters struggle through battles, imprisonment, starvation and peace. They fall away one by one until only a single member remains to recount their story. 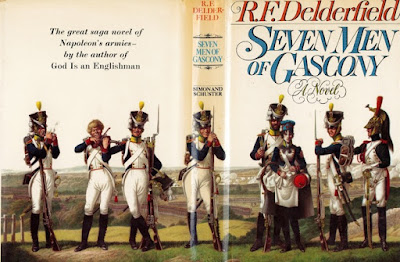 The book is an example of its genre and time: undeniably masculine, perhaps a little wooden and oftentimes quite sentimental. Nonetheless, it has much to say about compassion, friendship and humanity.

In light of the Seven Men of Gascony (and the many other 'groups of seven', this year's Painting Challenge celebrates
Camaraderie and Teamwork.

Figures can be cleaned and primed prior to the start date, but you cannot start painting until December 20th. In order to be fully scored the figures have to be based and their groundwork completed. The figures have to be painted by you. The Challenge follows the honour system in the completion and entry of figures. (There will be pillorying for anyone who sullies the hallowed hobby of painting toy soldiers...)

The figures can be in any scale and in any genre (pulp-adventure, science-fiction, fantasy, etc.).

In order to be scored, photos of all figures/units along with a short description must be uploaded to the Analogue Hobbies Painting Challenge blog. Up-to-date scoring will be maintained on the blog's main page. I will send out an email to all Challengers prior to the event to for further details.

Participants must have an entry submitted within the first month of the event (i.e. January 20th). Failure to do so will result in being dropped from the roster.

The Judge (me) will participate, but my score will not have any standing in the Challenge (I will continue my perennial struggle to stay in the midst of the pack).

I will be the master of ceremonies, but I've press-ganged a group of Minions to assist me in keeping this crazy circus on the rails - more on that later.


Similar to previous years, I ask that each Challenger declare his/her points target that they hope to achieve by the March 20th deadline. Many participants have found this a great incentive to help maintain their pace over the three months of the Challenge. I encourage Challengers to pick a target that is just beyond your comfort zone, but still achievable. As a rough benchmark, 400 points is considered a manageable amount for someone who is new the the event and/or has a busy work/life schedule. Also remember that a significant amount of points can also be secured by participating in the Bonus Rounds (more on this below).

Relating to the points targets, many folks have a lot of fun issuing 'duels' to other participants in order to race to meet a declared target, paint the most figures for a specific period, etc. I leave this to the participants to organize, but we're happy to log the duels and keep track of their progress.

Same as previous years, we will have a series of thematic Bonus Rounds. Each Bonus Round asks Challengers to enter a submission that illustrates a particular theme. The Bonus Rounds are not mandatory, they are just a little bit of fun to pace out the the Challenge and allow people to gain some points and fame through presenting themed vignettes and single figures.

Those Challengers who submit an entry for a 'Fortnight Theme Bonus Round' will receive an extra 50 points on top of the regular entry tally.

Figures for the Theme Bonus Rounds should be 15mm or greater and can be of a historical or fictional subject.

The five Bonus Themes along with their submission deadlines are:

The theme submissions are to be sent in by 12:01 am (CST) on the specified date (In other words, get it in by Saturday night!).

For each bonus round I'll post a poll listing all the round's entries so visitors can vote for their favourites.

The Price of Entry


As in previous Challenges, I ask for a memento from the Challengers. In the past I've asked for a figure from every participant, but to keep things in theme, for this year the Challenge entrance 'fee' I ask participants to team up with another, or others, to create a submission. For example, two Challengers could work on one figure (one painting the horse while the other the rider), while another group of Challengers could create a vignette or a themed grouping of several figures (a famous trio or band). The point is I want participants to work within a team. The submission can be of any theme, genre, period, etc. Do what you like - have fun with it but it has to have a central theme tying it together. The submissions will be supplied and painted by the entrants. They can be submitted any time up until the end of the Challenge. Again, same as previous years, for each Challenger I will donate $5 to the Saskatchewan branch of the Regina Humane Society.

If you wish to participate please send me an email along with your desired point target (curtcampbell at mac dot com). I'll place notification in this space when all the participant slots for the Challenge have been filled.

See you in a month!