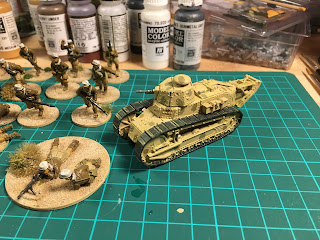 The Foreign Legion will get some very limited armor support in the form of a aging FT-17 tank. I'm not sure any really served in North Africa and the Levant but in my universe they did. 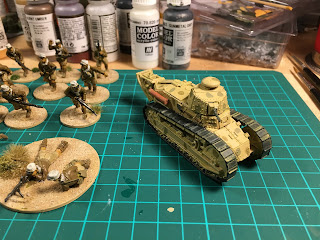 The model is in 28mm scale and from Trenchworx.  This is my second FT-17 from them and the model is simply superb.  The model comes with an optional 37mm gun and both are magnetized to allow for easier changing - really very clever work from the Trenchworx team. 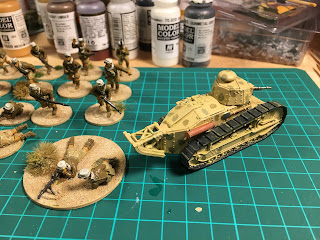 It's little more than a very slow moving machine gun nest, but hey somethings is better than nothing!. 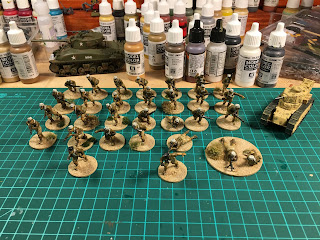 Here's a shot of the whole force.  I suspect you'll see some WWII Italians sometime over the next month or so to complete my WWII collection.

Lovely work Miles, you've been very busy. I've always liked the look of the FT-17. With it's fully exposed tracks, rounded turret cupola and whacky trench 'tail' it has a very distinctive silhouette. When it was first released in 1917 it was state of the art, and the fact that it was still in service as late as the late 1940's speaks to its robust design (and yes, they did see service in Morocco and Tunisia, so you can sleep soundly in the knowledge that you're building a historically correct force for your 'DAK & Dragons' game...). AND they even saw service rusting away during the First Indochina War (which is why I have one of these little beasties to build as well).