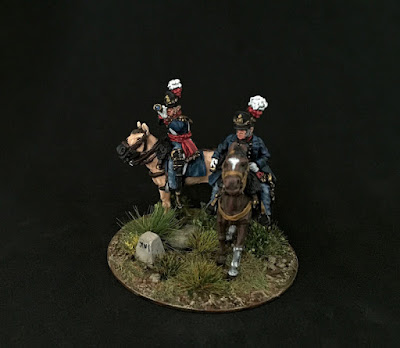 Spastically true to form, I currently have around eight projects on the go, each in a bewildering state of completion/evolution/devolution. Nonetheless, not one to deny yet another diversion, I discovered when planning for our Boxing Day Napoleonic game, that I was in 'desperate' need of another British command stand to boss around the rankers. Of course I realized this the night before the game.  Not to be deterred, I decided that, sleep be damned, I would get it done in time for the tabletop the next day. (Yes, this sleep deprivation thing is becoming a common refrain it seems...)


Well, to make a long story short, I did manage to coax these figures to a point were they could be presented with only a trace of chagrin. But as these things often work out, Peter arrived for the game, beaming like a Bishop, with one of his British command stands in tow, and I thought it would be rather churlish not to use his for the game. Yes, one has to be somewhat sanguine about these things. I reflected that while my figures did not make it to the miniature battlefield, I still got the satisfaction of completing a few new models for the collection (albeit in a self-induced flap). So all is good and right in the world. 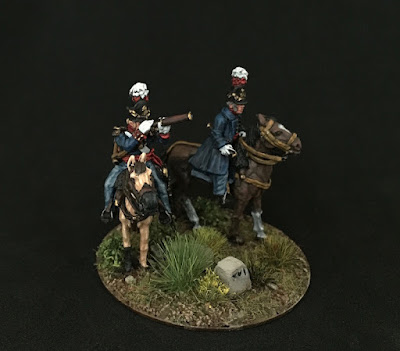 Anyway, I'm prattling, so let's move along. What we have here is a Napoleonic command stand featuring a pair of British foot artillery officers in their 1815 uniform. Being a naturally licentious race, the English officers are seen here gawping at some comely Belgian milk-maid, presumably captured in a Vermeer-like haze in the middle distance, near some boring berg called Waterloo. That, or they may be ranging in their guns at a distant French battalion, but that's not nearly as interesting. 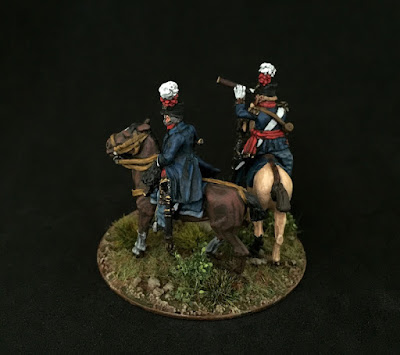 These 28mm figures are from the Perry metal range and were quite nice to work with. Like the rest of my Napoleonic collection I've affixed them to a metal base as I like the low profile they provide. I had a milestone marker knocking around and thew it on the base for visual interest (yes, riveting, I know). Otherwise the basework is my regular trope of texture gel, gravel, flock and tufts. 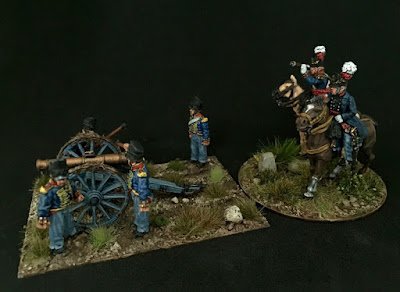 The last couple of shots are of the officers with one of my foot artillery bases (painted ages ago when the earth was still cooling). Sorry, to my everlasting shame I had no Belgian milkmaids at hand, something which sorely needs to be corrected. 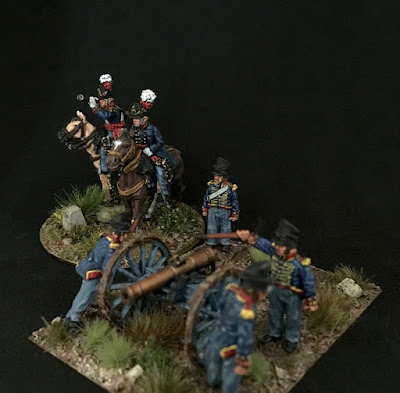