As part of my initial entry to Curt's painting challenge two years ago, I started a project focusing on the Great War and Canada's involvement in it.  Having completed a good number of both Canadian and German troops I thought I should expand just a bit to cover some of the other allies that would have been involved near the Canadians.  The first and most obvious choice would be British, but since the Canadians were part of the British contingent and in the same basic uniforms I decided to go with the French for something a bit different.

The Canadians fought near the French on several occasions starting right from their first battles at the 2nd Battle of Ypres. This makes it easy for me to justify adding in small units of French to many of the games that I run.

The figures here are Renegade figures and therefore a bit chunky compared to other manufactures out there, but are none the less very good figures, it is just hard to mix them with others as they look huge next to everything else.  There are 2 rifle sections each made up of 8 men and a leader as well as a big man to lead them all.  This adds up to a total of 19 figures. 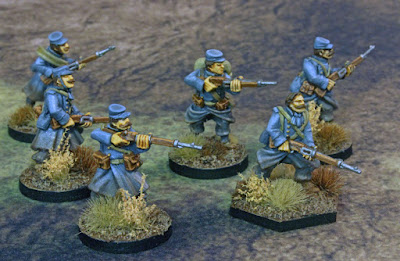 I was not sure on exact colour schemes so I referred to Mr. Roundwood's excellent guide here: The Verdun Project: Painting Late War French Infantry – Part 2. Knowing the colours to use made things very simple and I airbrushed the figured with the base coat for the blue coats and then highlighted them with airbrush as well. From that point I went in and painted everything else following the colour guide.

When it came to basing, I wanted to use something that would both match my German and Canadian basing, yet be distinctive to the French so that you can tell at a glance that they are a different force.  All of my WW1 figures are done with a dark brown earth base, the Germans then have bits of metal and wood added to show they are in trenches or prepared positions and the Canadians have grass and flowers showing that they are marching up from the rear lines across undamaged land. I decided to base the French with yellow and brown grasses and flowers to represent the dead nature of everything the gas touched after the first attacks.  Hopefully it works as distinctive enough. 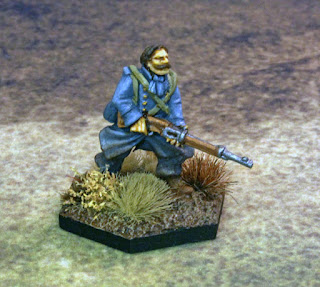 The last touch was creating some cards to use this force in my Through the Mud and the Blood games.  Sticking with the same theme of my other cards I looked up some French WW1 posters online and used them as backgrounds. 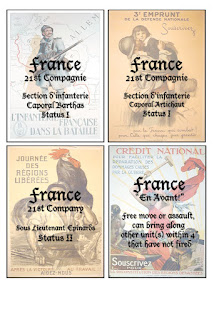 Aaah the delights of "horizon bleu" - what a fine rendition you have done - to my eye it is always more blue than grey - I really like what you have done with these. Great that you picked up on Sidneys experience with it to - more power to the blog-o-sphere. I do think the French add that nice bit of colour to Mud and Blood - so good choice I say. You can almost smell the garlic looking a them. The contaminated grasses I think really work , its a good way of bringing everything together. Really good idea on the cards too.
Posted by ByronM at 3:18 am

Email ThisBlogThis!Share to TwitterShare to FacebookShare to Pinterest
Labels: ByronM, Great War, Through the Mud and the Blood, WW1