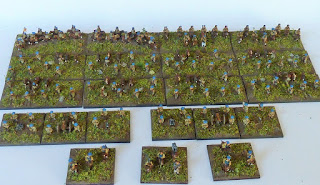 I'm flip-flopping all over the place with this year's challenge - gladiators, French Indian Wars, ECW, Bug Hunts of the Future, and now back to ECW again. This week I have pretty much finished my 6mm Covenanter project with some command figures, artillery and dragoons. 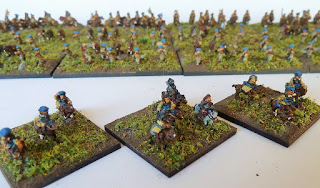 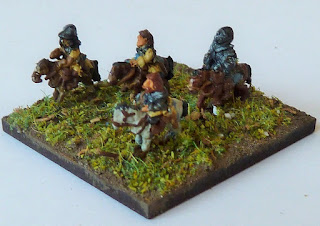 The dragoons include both mounted figures and dismounted troops skirmishing, along with horse handlers. Inspired by Tamsin's lovely bases I tried to vary the appearance with some of the mounted troops advancing obliquely in twos. Tricky to pull off on such shallow bases, but I quite like the effect. 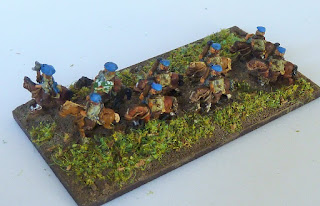 As for the points, there are 46 mounted figures,79 on foot and 6 guns. If the 24 riderless horses are 0.5 points each, then the grand total should come to 93.5, and I think we can round it down to 93 in recognition of the less than challenging frame guns!

Ah... the heady feeling of a "completed" project. Who are you kidding mate? There is no "completed", only those who foolishly believe a project to be completed and those who do not.

Regardless, a most impressive display of compressed Calvinists (hey, even Smurfs have feelings!). I especially like the frame guns which are recognisable even at this scale and really add a Scots flavour.

93.5 points for the miniatures, another point for "completing" your wonderful army and what the hell, another 0.5 just cause I hate fractions. 95 points all up. Well done sir! Cheers, Millsy

Posted by Dux Homunculorum at 2:58 am