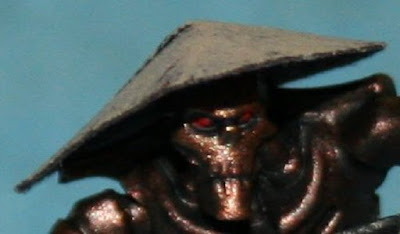 This project has been sitting on my shelves for 5 years and it is finally done! The inspiration came from a post by GregB, back in 2011, when he was working on a Valkyrie. Greg had many flyers ready to transport Elysian troops or blast enemies and I thought that this was a cool transposition of Vietnam warfare into science-fiction. Then I thought that there are very few sci-fi counterparts to the Viet-Minh and Viet-Cong armies and was wondering what a Asian style sci-fi force should look like. Games Workshop often integrates elements of various cultures into their armies: the Lizardmen's background is inspired by the Aztecs while the Tau are obviously a transvestite (perhaps "travesty" - GB) of Japanese anime robots, but nothing in their catalog seems remotely Vietnamese or even Chinese. So I decided to "asianize" one of the existing faction and bought a bunch of Necrons on kijiji for this purpose. If the Tau I bought previously were in fine shape, this time the lot I got was in a sorry state. The monolith had been put together with epoxy glue of all things! There were huge gaps between the panels and many parts were missing. I haven't bought miniatures on kijiji since. 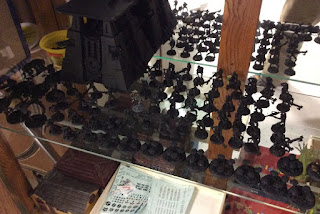 A few days ago: the Viet-Cron army primed and ready to be "metalized" and "asianized."

And now, the Rise of the Viet-Cron is complete! All models are from Games Workshops, except the hats and the roof.

First, there are 12 scarab swarms for 60 points. These are the only Viet-Crons not wearing the trademark rice straw hats.

The core of the Viet-Cron is made up of 45 warriors. However, one was painted before the Challenge as a prototype and must be counted out. This group is worth 220 points. Because some figurines were damaged, a few warriors have been mounted with a head or an arm missing, as if recently damaged in battle. As the fluff says, the Necrons can self-repair anyway. Instead of silver or steel, I opted for bronze as this color of metal, evocative of oriental palaces and temples, appears more "Asian". The rice straw hats were made of black construction paper cut and shaped into little flat cones, then glued into position and painted.

These 6 Flayed Ones bring in 30 points. These close range killers are supposed to cover themselves with the skin of their victims. However, to make these kid-friendly, the skin parts were instead painted as old rags. The rice straw hats really suit them: they evoke demential ninja assassins.

For this group of 5 elite warriors (25 points), I used gold instead of bronze, just for a change. 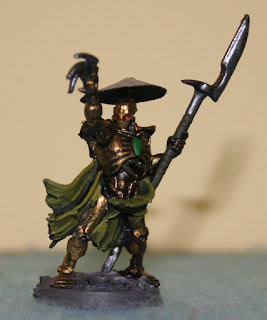 The leader, Ho-Ma-Shin, with its mysteriously levitating hat. 5 points.

3 Wraiths. The guy on the right shows symptoms of epoxy scoliosis. I could not undo this misaligned joint without breaking the mini. 15 points.

3 Destroyers and 1 Heavy Destroyer. These units required careful rebuilding. Because there is no groundwork, I deducted 25% from these "mounted" for a total of 30 points. 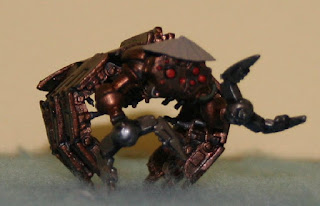 Aww, isn't the Tomb Spyder cute with a rice straw hat? The three prong hands have been reduced to two prongs because of missing parts, but she still looks good. Her size makes her a "mounted" for 8 points (10 minus 25% for lack of base, rounding up). 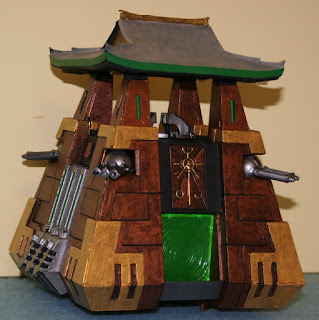 Finally, the "pièce de résistance", the Temple of Metal (tm) (15 points). At first, given the sad condition of the model, I was considering just using the parts to make debris on the battlefield. But after breaking off a few parts, then plugging in the holes with plastic cards, it started to look OK. I found a paper model of a Japanese temple on the Canon camera web site and built a roof to put on top. All in all, despite the reconstruction ordeal, this fusion of Asian cool and sci-fi appeal was a very fun project.

The points gathered here will also contribute to my tally for the Sci-Fi Challenge.

As for Sophie, she took a painting break this week. Maybe she'll have something to show next Friday.

Well, Sylvain, what can I say to this, but MERDE! great work! On the one hand, another Def Con1 points bomb that nets you a huge pile towards your total and our Sci-Fi Challenge.  And you do it with a submission where you name/blame some of my own old models for inspiration! I don't know if I should feel proud about that, or go find those Valkyries downstairs and hit them with a hammer!

Even though you are rendering my competitive position in the side duel down to its component atoms, this is a very impressive and fun submission Sylvain.  Great brushwork, and I find the thinking behind it intriguing. I generally despise the Necrons, but here you have done something very fun and creative - insurgents who literally cannot be killed.  There is some excellent meta-commentary somewhere in that notion.  When we meet next, whether that is in Regina or here in Winnipeg, I will have my Valkyrie-mounted Imperial Guardsmen ready for a tangle with these fellows - we must set that up!

I'm giving you some extra points for adding all the little bits that make these guys "Viet Cron" - total of 418 points...sigh...where IS that wine? And can someone stop Sylvain? To borrow a phrase from the psuedo-setting in question, I need Napalm, NOW...