From DaveD: Colonel Campbell, the Good Lady T and a Little Crisis... (15 points)

"Colonel Campbell it's just not on! What do you mean there are no facilities? I have had a long journey from London. I am here to help and look after our brave troops in the Sudan" said the formidable Lady Tamsin W'gamer. "I expect there to be proper facilities for a Lady to use - so sort it out! or there will be trouble in the newspapers!"

The good Colonel sipping at a cup of his favourite Old Brown Java peered at her through his monocle and decided he had best attempt to do something - a job best delegated he thought. "Major Docherty! get one of your chaps to short this out my dear boy" 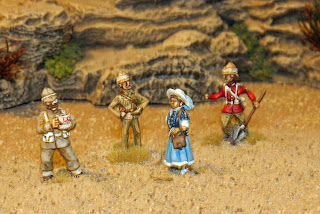 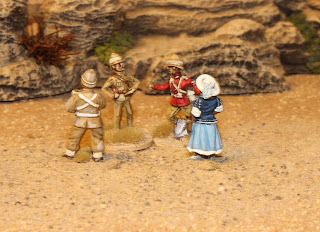 The Major knew just the person  "Corporal Millsy" - sanitation sapper extraordinaire with his mighty shovel would know what to do.

Soon the red coated sapper was beavering away - though strangely there was much sound of sawing and hammering from the far side of the hill. 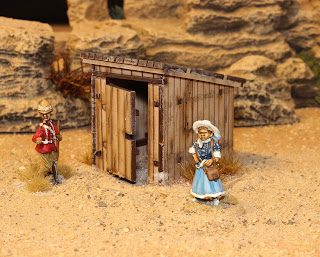 There you are Ma-am - said Corporal Millsy a few short minutes later. The good Lady was impressed and looked relieved , its my General Issue Moveable Privy... or GIMP for short. 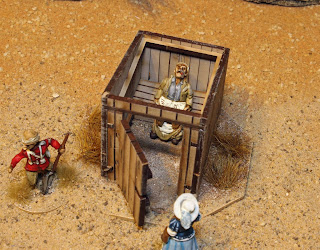 As the Lady Tamsin went to enter she recoiled back - "er....  Corporal Millsy - there appears to someone - or perhaps it's something inside?" Millsy knew who this would be - Private Clint who he had tasked with providing the loo roll was at ease as usual! 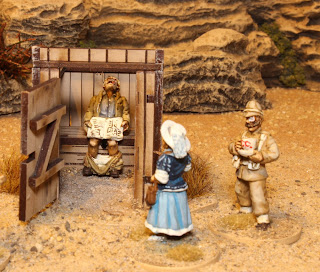 The Good Lady T is the limited edition Mary Seacole figure from Partizan this year. The Colonel was picked up from a mixed box of figures at a show and is of unknown provenance. The poor soul on the loo is part of a toilet humour set made by Colonel Bills - and the Thunderbox is by Foreground, if I remember. So its two 28mm and 1 part one. The Major and Millsy appeared last year.

Well - its good to be back in the Challenge Asylum for another year. I have another full programme of Sudan related activity - but also a few other asides as well.

This morning started well on the  "Paint and Chats" with 4 of us on from Oz and the UK - the sound of paint cleaning water being stirred was much in evidence. Right off to work on a "Point Bombe!"

I'm delighted to have made a cameo in this installment, as I'm sure Tamsin is as well, but what of poor Clint? Will he ever wake up? What is he reading? And has someone told him that the latrine has not yet been dug? :)

Right, let's call it 15 with the Thunderbox, eh?