Fantasy focused goodies from me this week, with some unusually good productivity prior to having this weekend off painting to attend CanCon: the biggest hobby convention in Australia.  Hoping to catch up with a few friends and bloggers there, including a number from the challenge.

First up: Ta-da! This is a surprise present for JohnS’s birthday!

The colours specifically match John’s lovely 28mm Orc army, which is comprised of the long OOP Chronopia figures with their great Moorish vibe.   I carved the body off a Chronopia Orc Leader and remounted him onto a similarly dissected Scotia-Grendel Carnosaur.  This was a somewhat challenging conversion so I added a back banner which is actually a long steel rod which pins the model together very strongly despite the dissimilar materials. 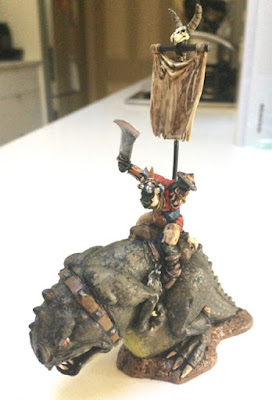 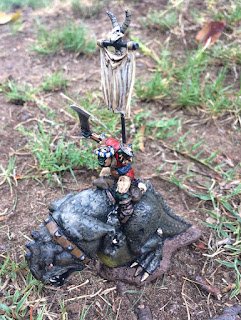 Pleased to present a good buddy with something unique for his army and I know he will enjoy using it.  Naturally though, if I have to face it on the tabletop it will automatically fail all of its activation rolls :-)

Elite Riders
These guys are the centre piece of my Riders of Doom fantasy army and while expensive points wise, they really kick butt in Dragon Rampant.  Yes they are indeed GW plastic Chaos figs and I didn’t de-skull/chaos them as much as my last batch because I think they look quite good as is. 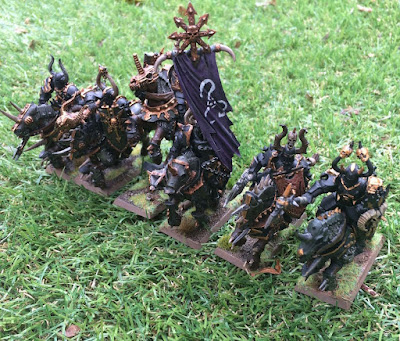 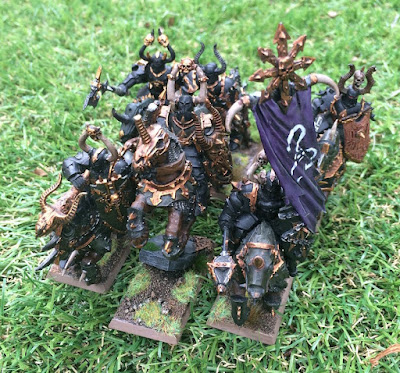 Unfortunately, three of these had a little paint applied mid last year before stalling, so I’ll only be claiming 3 of them, including the hand painted banner chap.  Great to have this unit finished and on the table!

Trolls
4 big ‘uni which are lovely old and characterful Troll models, originally by Ghost miniatures and now by Old Glory.   Beheaded casualty fig is from the Conquest Norman boxed set and I quite enjoyed doing that dioramic basing to demonstrate that these lads are not to be trifled with! 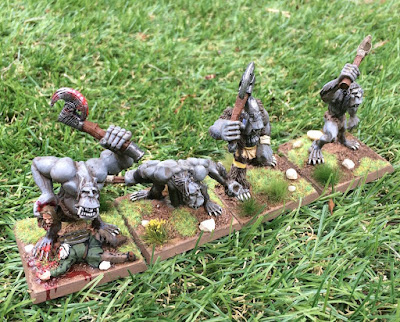 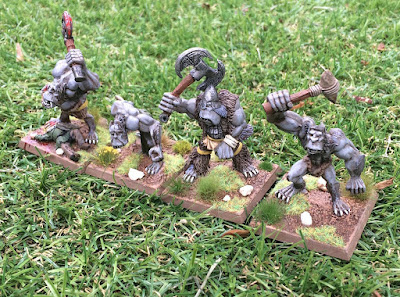 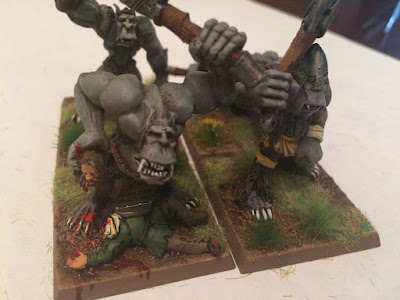 They have already played their first game and yes they were slaughtered (by Reilly's Dwarves from the Armour bonus round), but at least they looked good doing so :-) 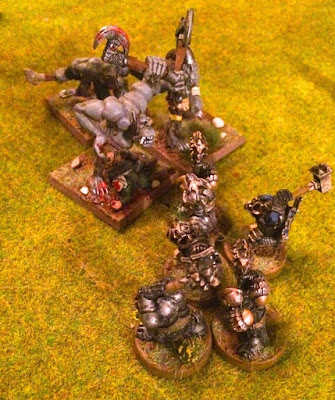 Thanks to JohnS for the donations to the horde – I hope I’ve done them justice!

Beastmen
Classic GW figs to mix up my Riders of Doom force for Dragon Rampant.  I really tried to speed paint these but so help me I just cant leave all those details untouched.  Overall, these maybe took 2/3 of the regular time but I think the rougher and ready looks suits them well.  After painting all those FIW Indians recently I felt compelled to add some tribal warpaint and think it adds nicely. 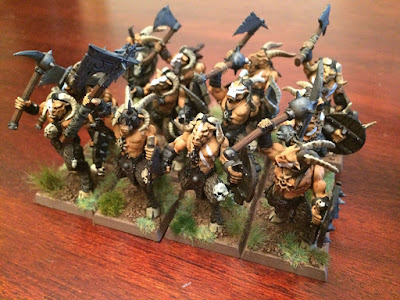 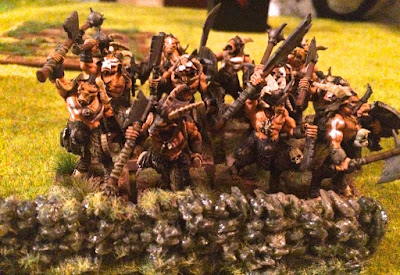 They have also seen their first combat and were routed from the field after suffering 1/3 casualties, again at the hands of Reilly's Dwarves.  So now we've gotten that out of the way, I'm looking forward to seeing what they can do :-)

Champion
Yet another GW fig and I didn’t deskull him either – I understand he is a limited ed figure (?) so I let him be as is.  And standing on a pile of skulls? Well, who is going to inform your Riders of Doom champion that doing so is not in accordance with the warlord's work health and safety policies? Exactly! 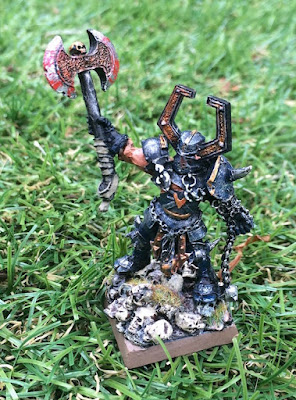 I went for blue with metallic features appearance – end result wasn’t exactly what I was after but he will do for now to get him on the table. 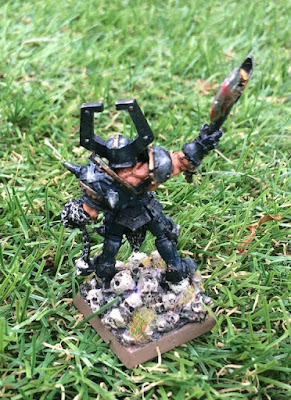 In wider terms this isn't a bomb, but for me its as close as you're going to see from me!

Points wise, this submission takes me past the half way point to my objective.  My target goal is in sight...but I'm contemplating a push to join the 1k club.  Mission Creep? You betcha, but in the best possible way :-) And peer pressure from Alan has nothing to do with it. Honestly!

Wow, Paul, you are hitting it right out of the park with these fantasy units you're creating.


I'm sure John will be absolutely delighted with his mounted Orc commander/champion. That is truly an amazing bit of work, Paul. The conversion looks terrific and I like the addition of the stained banner. What an majestic lump of nastiness those two make. Bravo!


The 'King in Purple' cavalry look suitably imposing, the beastmen are slaveringly ferocious and the champion a complete tyrant on his mound of skulls, but I have to say that I'm quite taken by that unit of trolls. Their faces have a certain Maurice Sendak look about them which I find very cool. I think they need to be lead by a precocious boy in pyjamas, wearing a crown and long tail.

160 well earned points for you, Paul. Wonderful work and I hope you enjoyed the weekend at CanCon.