From GregB: Vive L'Empereur (The Second One)! (60 points)

Well, no marks for originality with this next submission - why it's yet more infantry for the Franco-Prussian War! My last submission was a pile of Prussians, and here now is the completed force of French infantry to take them on. These are 28mm castings from "Eagles of Empire".  There are 31 of them in the pictures, but as with my previous submission, there is a bit of propaganda at work in the photography - a number of figures in this group shot that were painted previously or prior to the Challenge. Only 12 of the castings will count for scoring purposes this week. I just liked the group photo, so piled the whole lot in together!


These are based for skirmish games, with NCOs on square bases and more senior officers on hex bases.  As with the Prussians, there is a senior command base that adds a standard bearer to a senior officer that will be used to represent a higher status officer on the table. I was not able to find a proper eagle to affix to the standard unfortunately, but I still like how the fellow turned out.


While the sculpting style of these castings is definitely a little different, something I have remarked on in previous posts, I do give full marks for the sculptor capturing the feel of the period.  Where the Prussian sculpts feature many figures charging forward, the French are in a variety of firing poses, working the deadly effect of their Chassepot rifles, holding some manner of hopeless position. I think the sculptor clearly had a good feel for the dynamics of the period.

And as before, I just LOVE the uniforms of the Imperial French infantry. Those kepis, baggy red pants and epaulettes are just SO cool. Can't wait to get these fellows on the table!


The flag on the command base is also from "Eagles of Empire" - they offer flags for two of the French infantry regiments in the War.  This is fine for skirmish purposes, but for my larger plans involving games of "Black Powder", the lack of available flags from providers of nice flags like Flag Dude, GMB or Maverick Models is frustrating - Warflags has some for free, but you have to print those yourself, and the quality is just not the same...

Anyway, this submission will provide another 60 points for the pile, and represent the conclusion of my initial mad rush of this edition of the Analogue Hobbies Painting Challenge. I wanted to get enough 28mm figures painted to do a decent-sized skirmish game of some sort for the Franco-Prussian War, and between these chaps and the Prussian regulars and Jagers, I think we will be able to have a game very soon! Time to take a little bit of a break from this period and switch gears to another subject...see you next week! 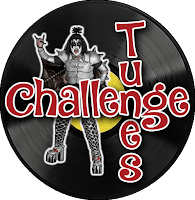 These folks are from the US, and they make a wide range of symphonic and electronic scores.  I first heard their music as part of the crowd-pumping montage for Winnipeg Jets games, and the effect is excellent.  Great background for painting little soldiers and wargaming!

Ka-pow!  And the veritable avalanche of beautiful miniatures from the age of uniforms being bright and fun continues from the prolific brush den of GregB.  The colours are fantastically realised with the highlighting really making them pop (that blue is ace) and the little details on their packs are spot on.  The command stand is my favourite, especially as I've long  suspected this is what it looks like at Curt's house when he's getting ready to rally the troops for each AHPC.... That officer is a brilliant sculpt and you've really brought him to life, bellowing orders at his hommes.  I feel your pain on the flags as that one does look very nice indeed.

As a dutiful minion, I thought I'd go take a look at some details on this conflict so I could sound right knowledgeable when commenting...... And I backed slowly away from my PC given the amount of info on there!  What I did gather was things didn't seem to go too well for your boys here, so hopefully they'll fare a little better on the tabletop than in real life.  Anyway, 60 points irrespective of how well or badly the war went for them to add to your ever growing total.