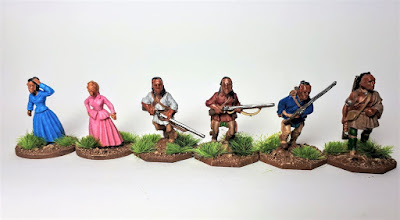 Oh gawd I feel like crap....Man Flu has hit the Rousell household!
Grooooaannn!

For my first entry into this years Challenge may I present Hawkeye and his pals, Cora Munroe, Alice Munroe, Uncas, Hawkeye, Chingachkook and the dreaded Mague.
Boo Hiss!!!

I did plan to paint these up in the summer, but only got as far as undercoating them and they were the first figures I saw in my box I thought they'd get done first.

They were and are a simple paint, which is pretty lucky for me! 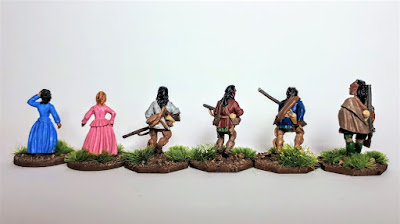 Of course these aren't for the French Indian War, they'll be for my Donnybrook excursion
into Bacon's Rebellion.

I make my first entry 30 points!

I had not realized you had not submitted an entry yet, so welcome back to the points roster Ray!

Great looking minis, Mr. Rousell. Maque was such an epic villain in that movie. I quite like how you did the buckskins and the flesh tones of both the tanned Hawkeye and the three aboriginal characters. I can't remember, do you have Redcoats and French in this scale for them to frolic with?

These six will give you 30 points to start your climb up the roster - well done and I hope you feel better soon!