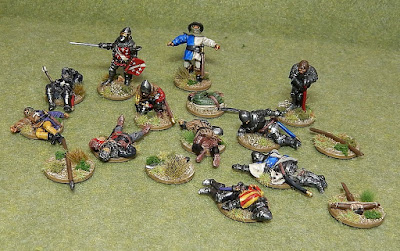 As a part of this weeks efforts I painted a couple of packs of Perry Miniatures Hundred Years War casualties to use as markers or other litter my battlefields. My last order included a pack each of Men-at-arms casualties and Infantry casualties from their Agincourt range.

Great figures with bags of detail and for Perry metals surprisingly easy to clean up. The two packs comprise six figures each and a sprue of loose weapons. 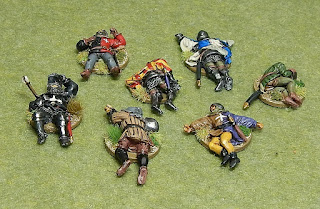 From the twelve figures seven are dead or lying down, I think these count as half points for the challenge so should work out at about 17 1/2 points towards my total.

There are also four weapons in each pack, I only did half so far, planning to use the rest for conversions, I'm guessing this collection of sword, longbow, spear and crossbow are likely worth a point each. 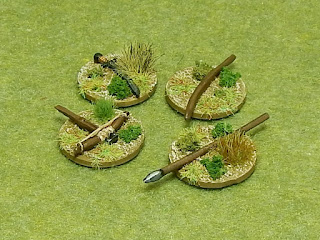 Finally five walking or at least kneeling dead and wounded. Bags of character here, the first chap is quite battered and looks to be surrendering his sword while the second chap pulls an arrow out of his arm. More on the third later, the fourth rests on his pole-arm while the last one looks like he has had enough! Five 'proper' figures so hopefully 25pts for these.

These all appear a bit shiny, I took the precaution of adding a coat of gloss lacquer before the dull coat as they shall not usually be on a movement tray and are likely to get more rough handling than the troops.

These should also contribute to the Hither do I Challenge Thee (SD4) duel.

That middle chap I am sure I have seen somewhere before..... 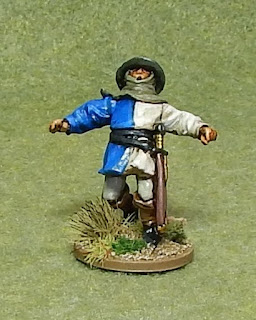 Yes, it's the Jolly Fisherman of so many holidays and day-trips of my youth! 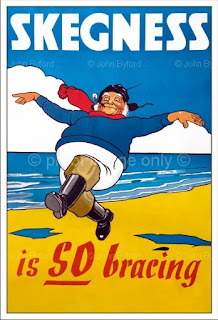 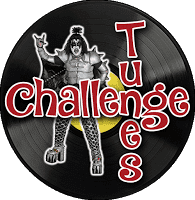 I keep forgetting to add Challenge Tunes, these lot were painted while listening to a lot of tracks by The Jam on Spotify.


And thus begins our Frenchiness. I can't say that I approve of the livery on the poor chap from Skegness, but the rest are up to your usual standards . . .

If any of you Challengers have made it to Kublacon in the Bay Area, you've definitely seen the games showcased on the Jay's Wargaming Madness blog. His games are amazingly cinematic, and feature a lot of these kinds of battlefield color. So it's very nice to see these coming along!

42.5, point five, mind you, points for these dead Frenchmen.
Posted by Paul Scrivens-Smith at 1:03 pm