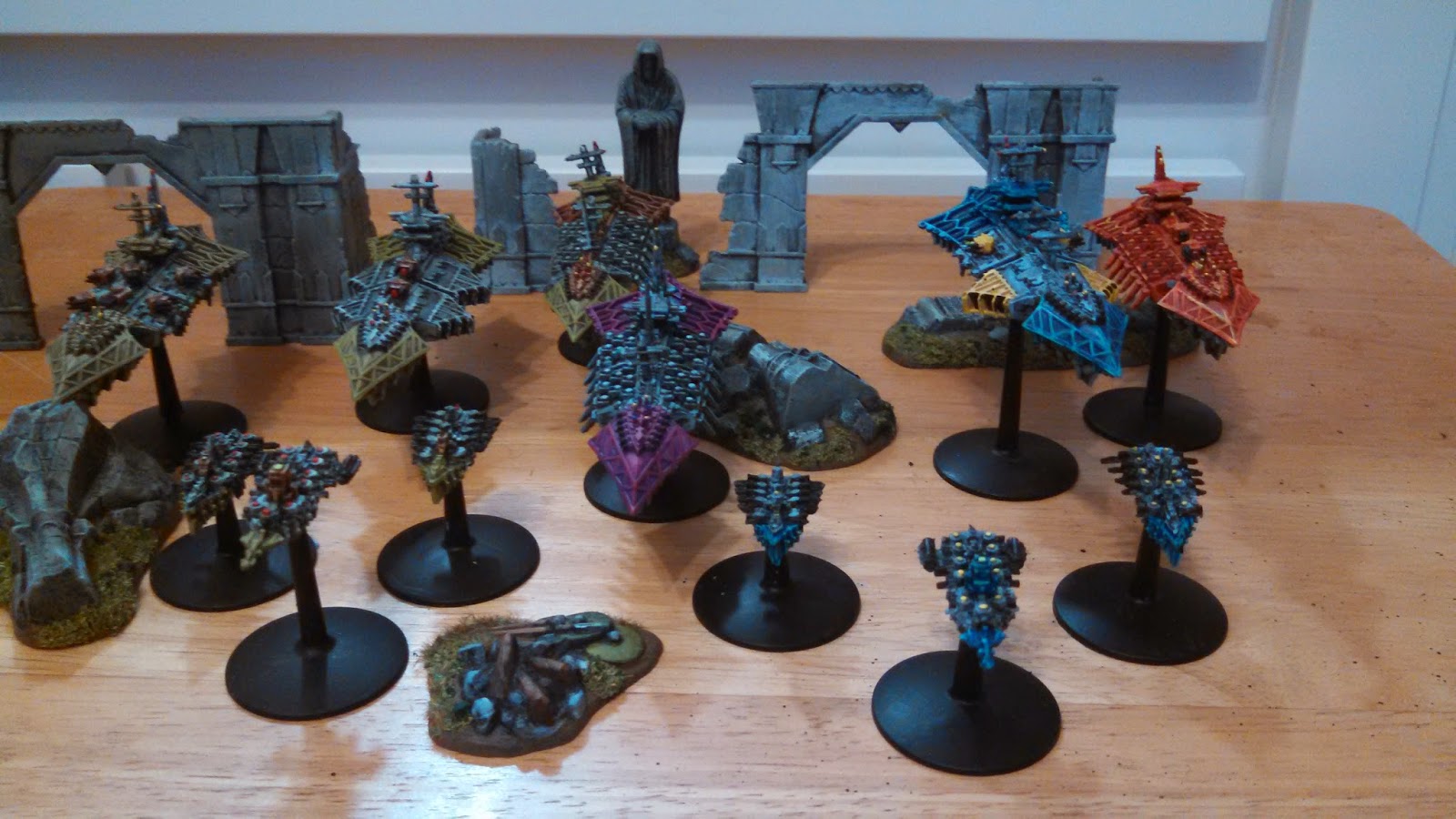 Thanks to Tamsin's really nice fleet, I was reminded about a little side challenge I opted in on. Fortunately, I did have a few ships lurking about. These are a very modest Chaos fleet that my wife got me...more on that later

I'd name the classes, but The rule books are packed up while remodeling the upstairs for my kids.
I lost my mancave, and my daughters will soon be up there with daddy between them and potential suitors! :) My son gets the old mancave which is only proper.

But, back to the ships! 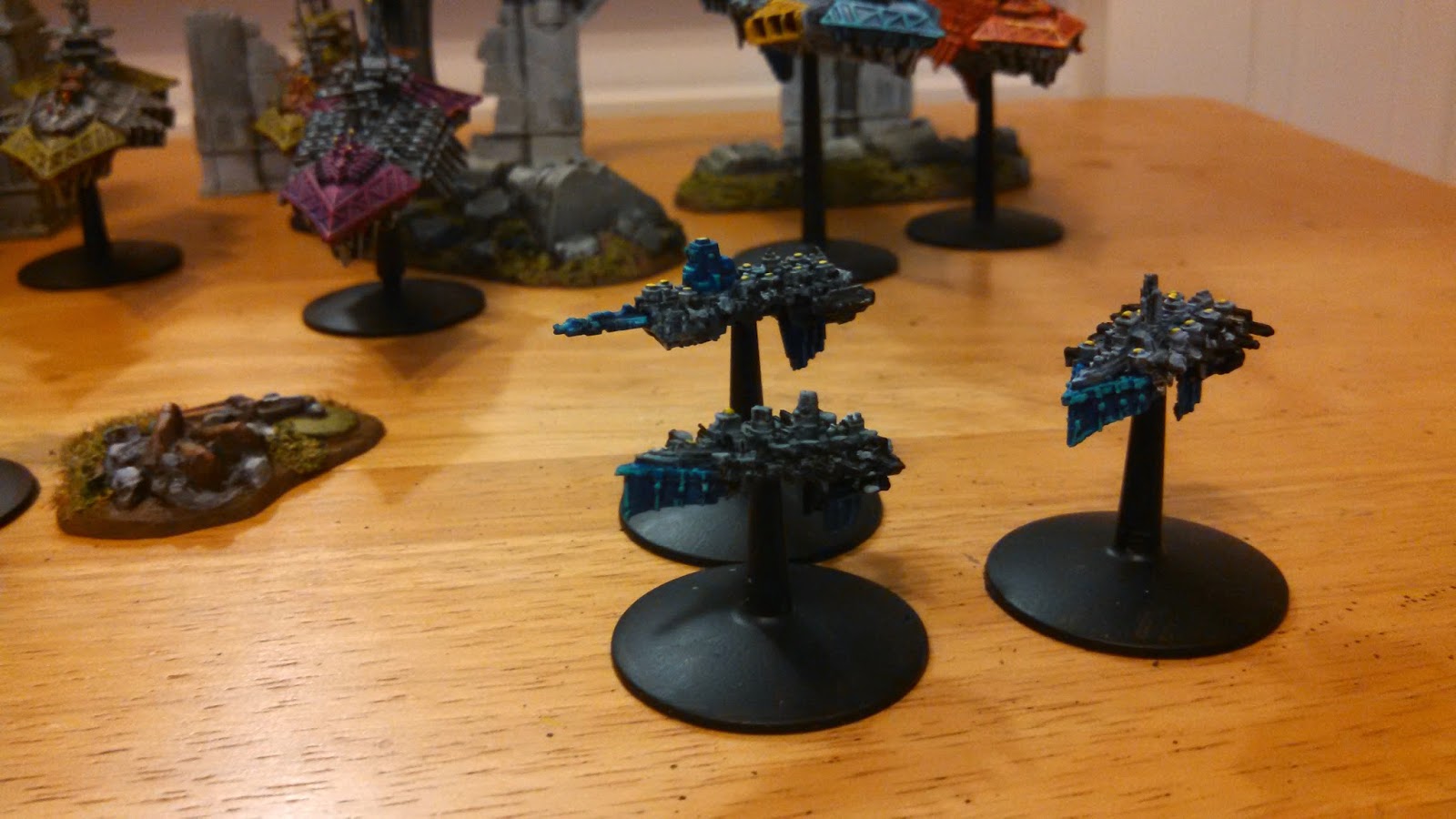 These are a squadron of escorts painted in blue to show they are followers of the Lord of Change. 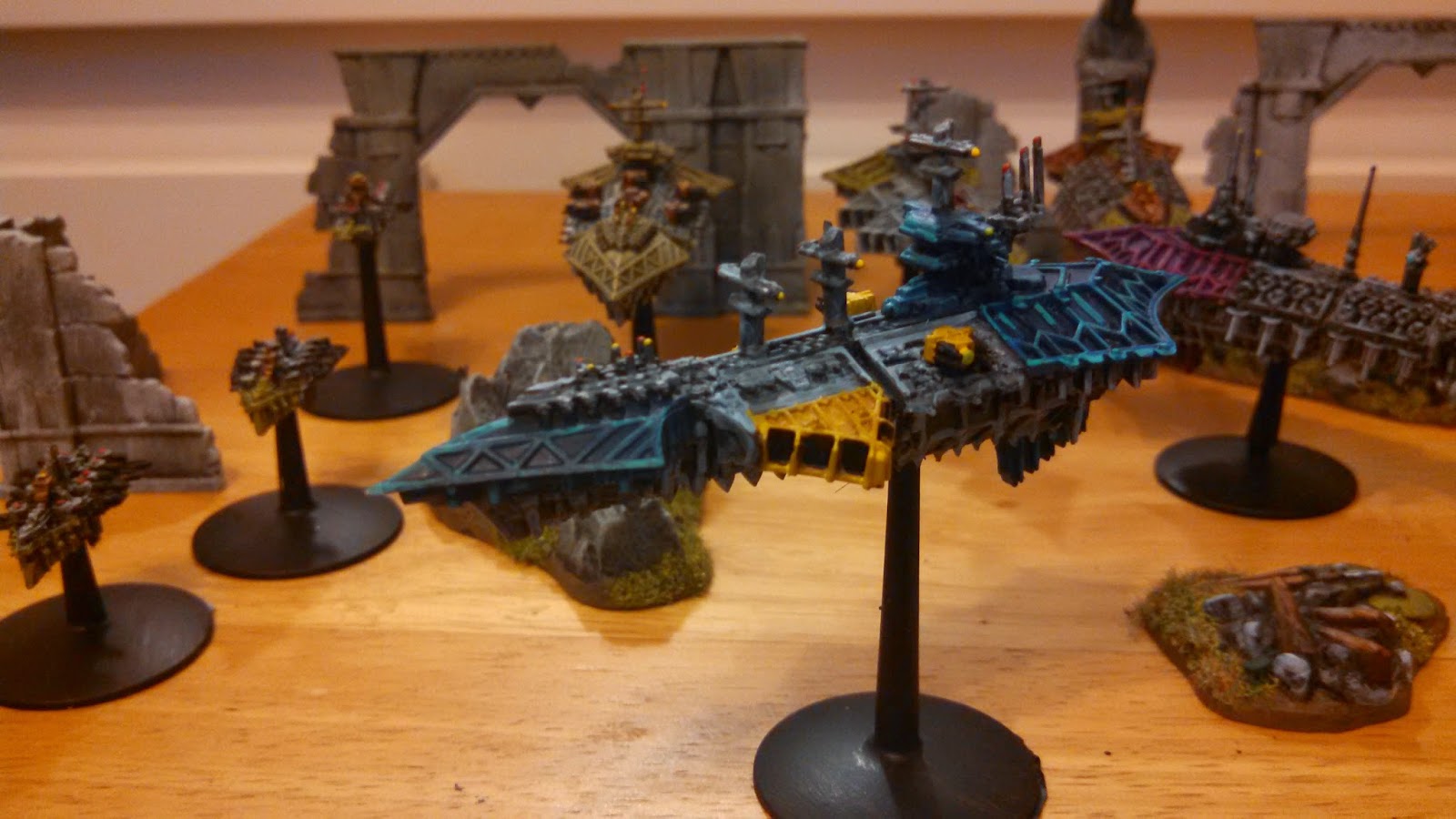 This cruiser is their primary charge the yellow launch bays should help the fleet weather Imperial torpedo strikes. 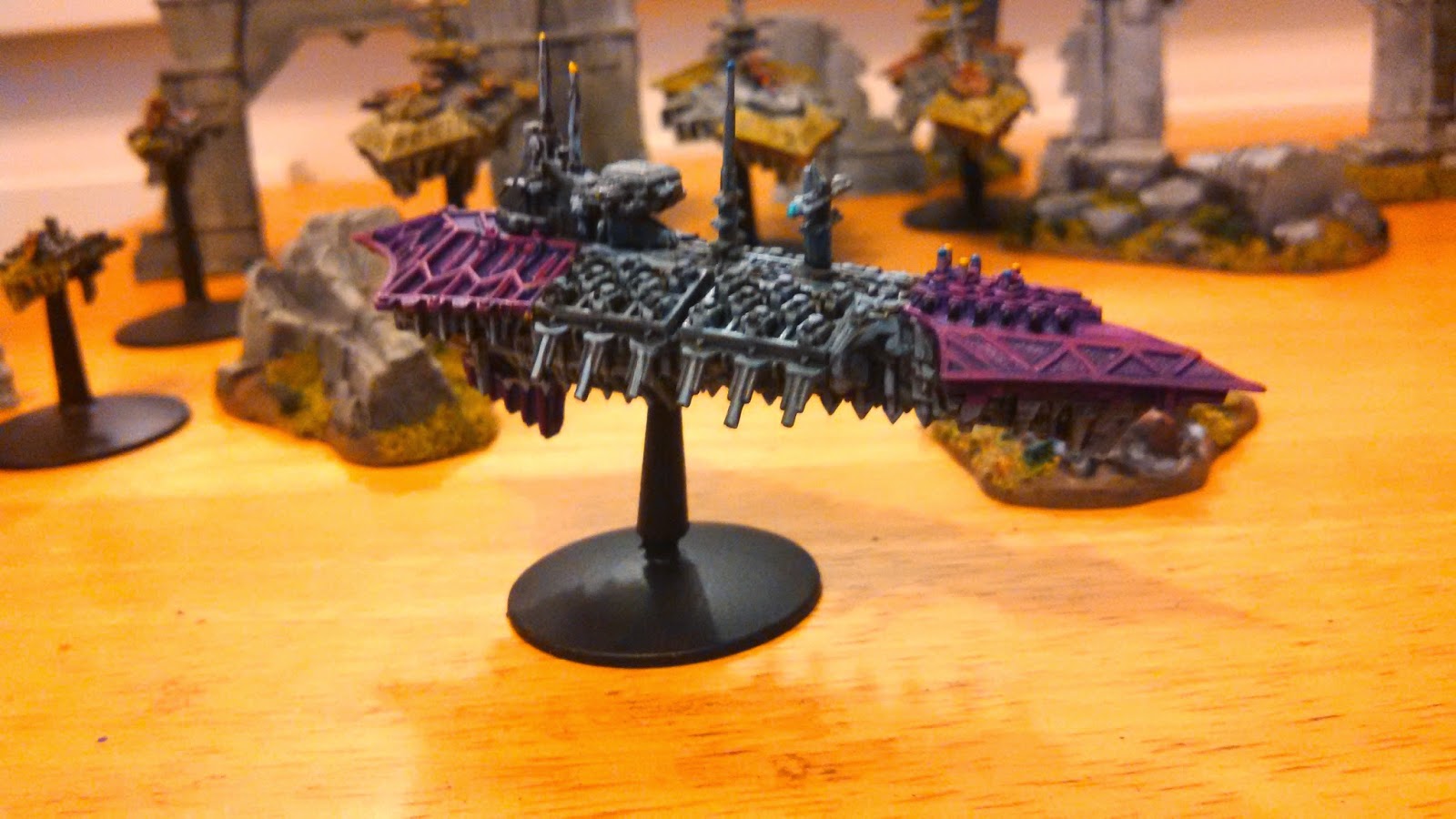 This cruiser is devoted to Slaanesh. It is loaded with gun turrets 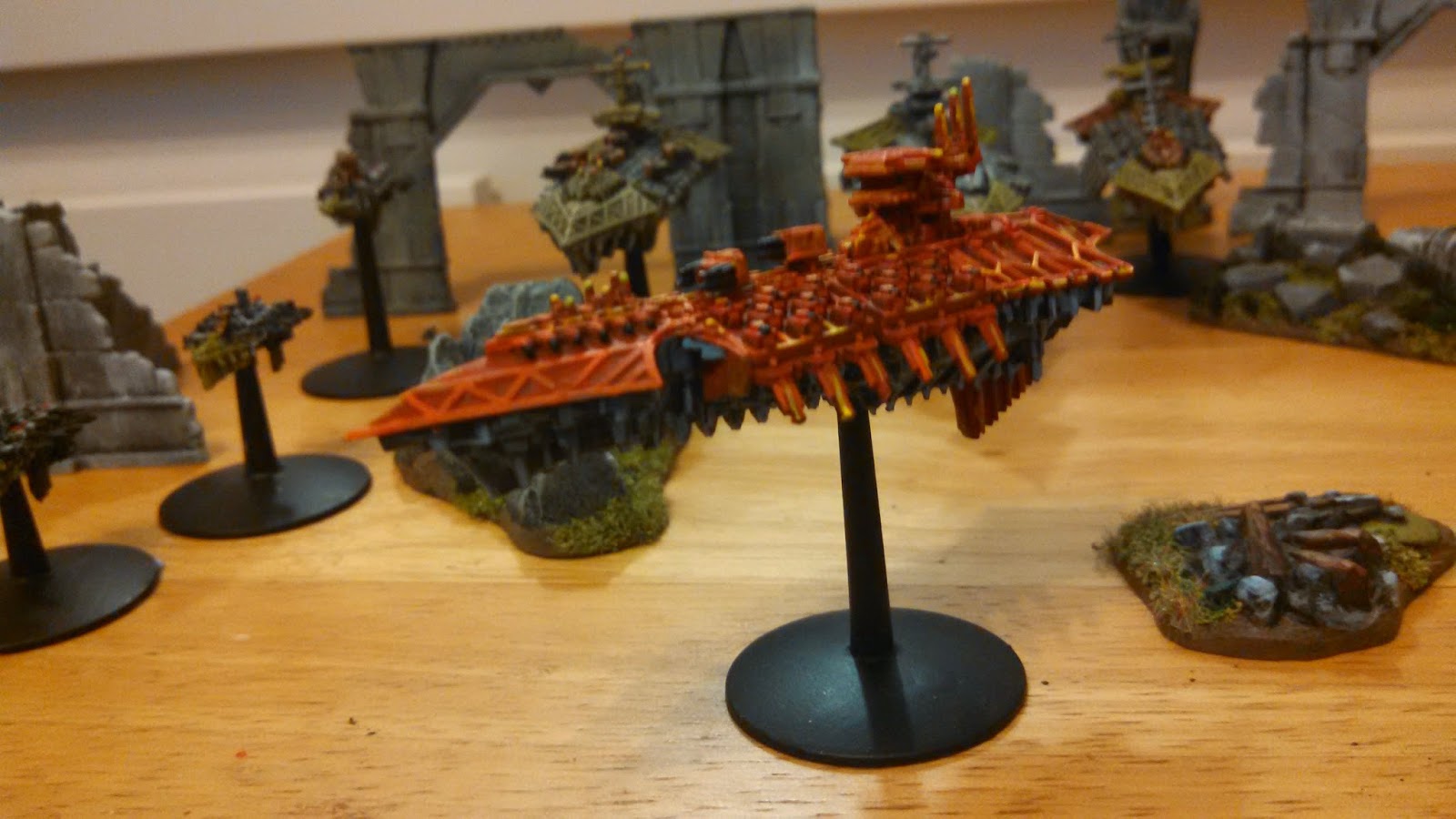 Khorne leads this small flotilla. This Cruiser also is loaded with turrets. 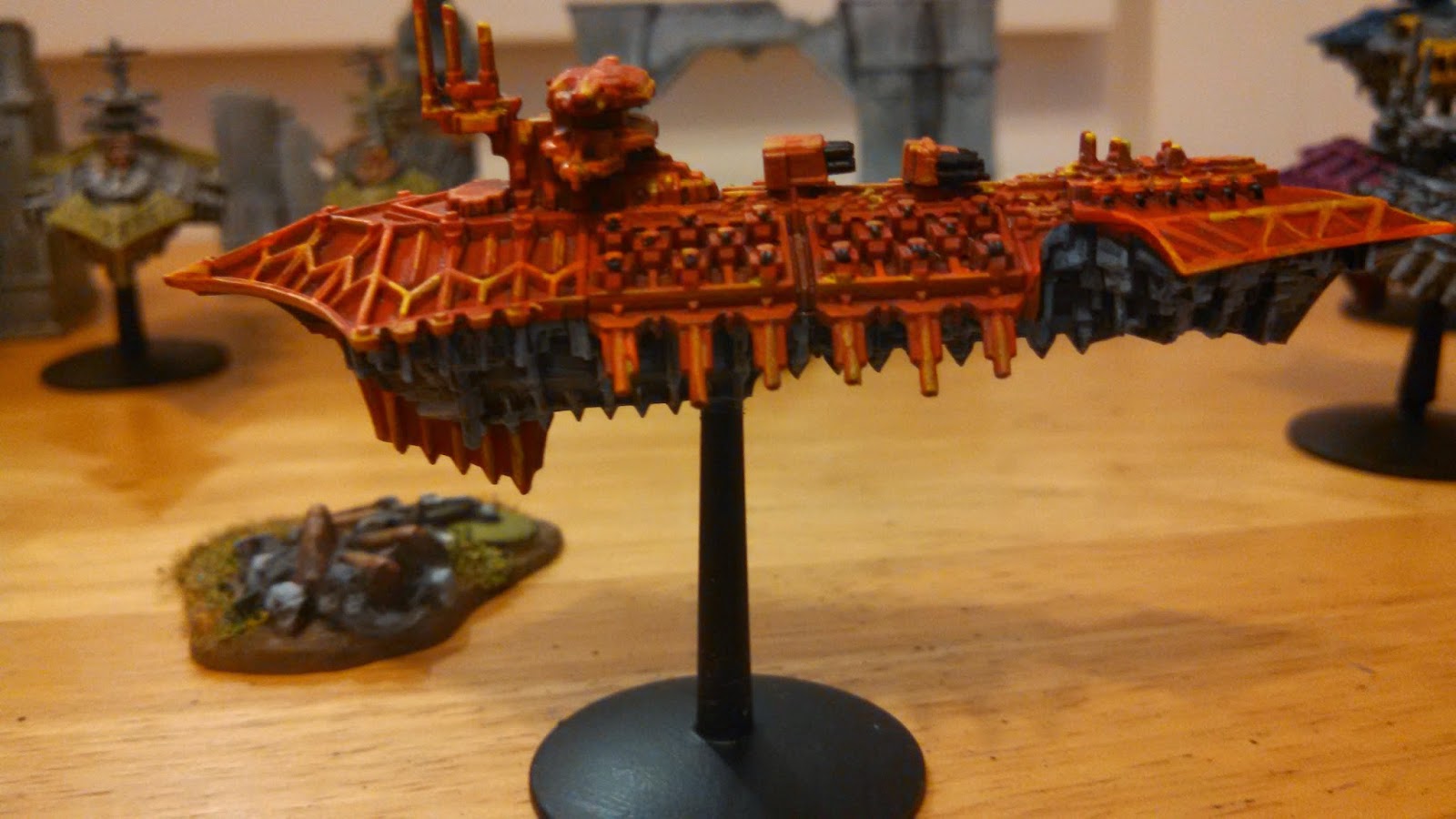 The addition of the dorsal lance turrets indicate it is a heavy cruiser. 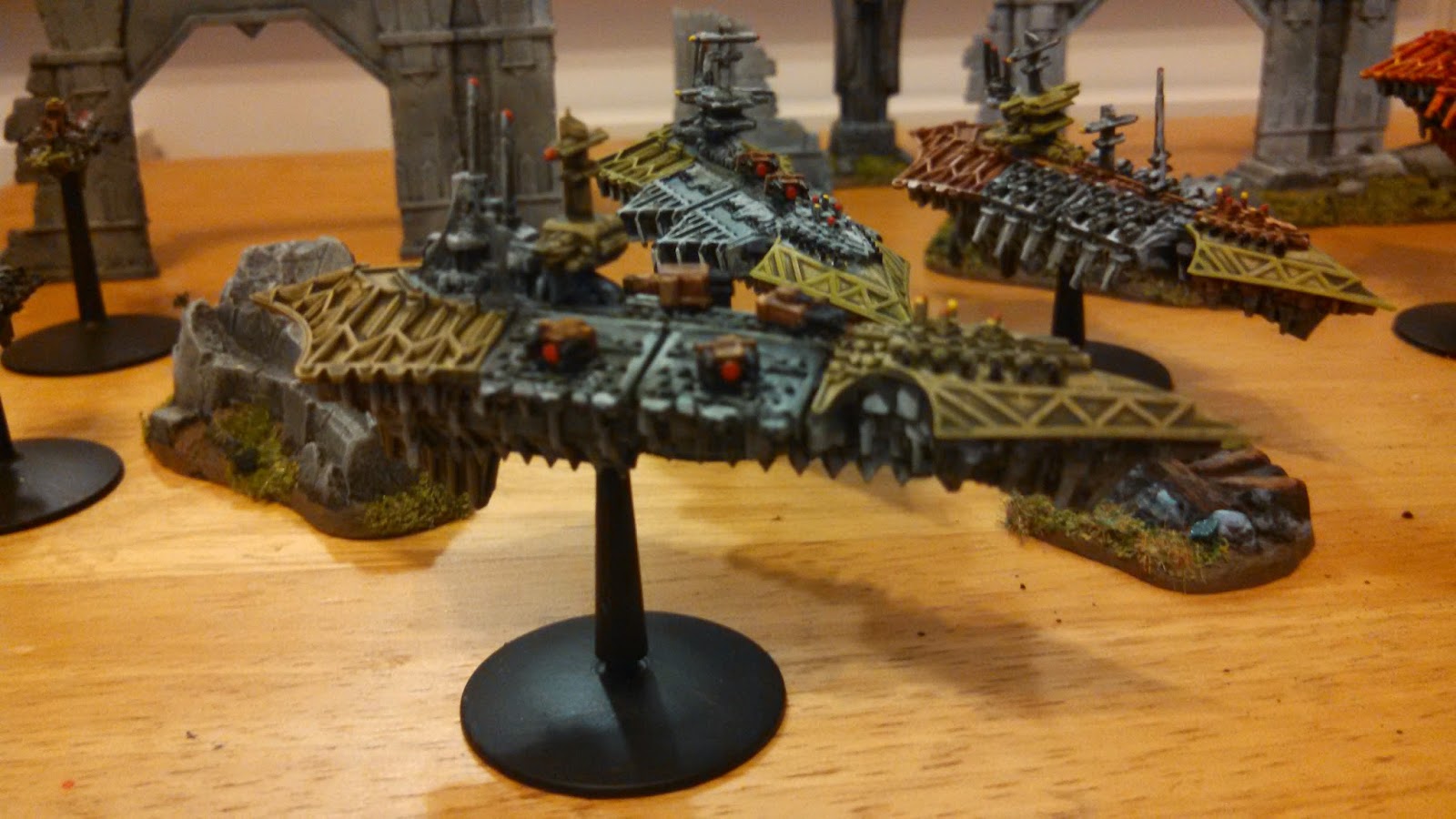 My first fleet was an icky green denoting they were devoted to Papa Nurgle. I went with green and brown sections over the grey hull for these. 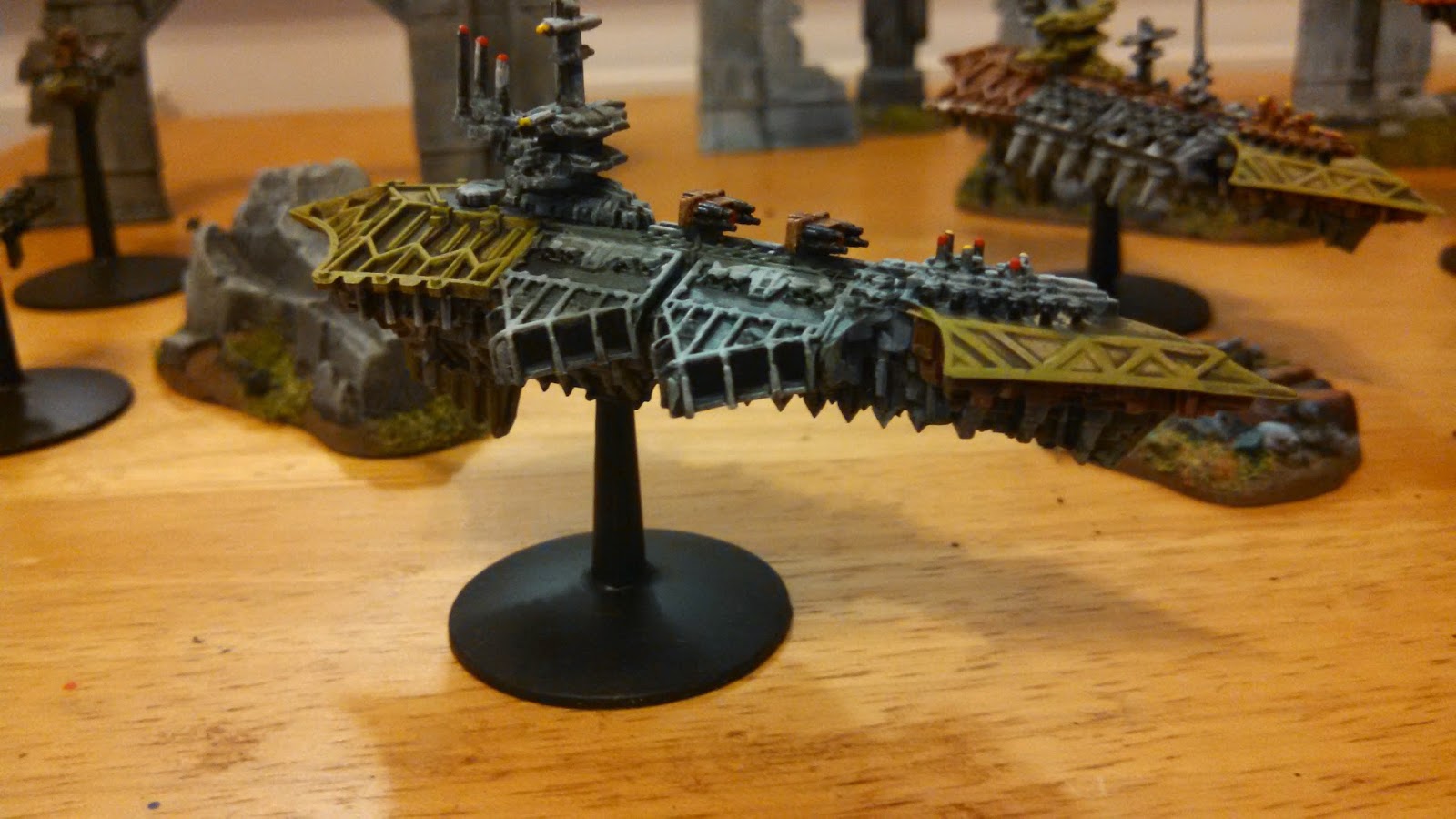 A heavy cruiser with lance turrets and lotsa launch bays leads the followers of rot. 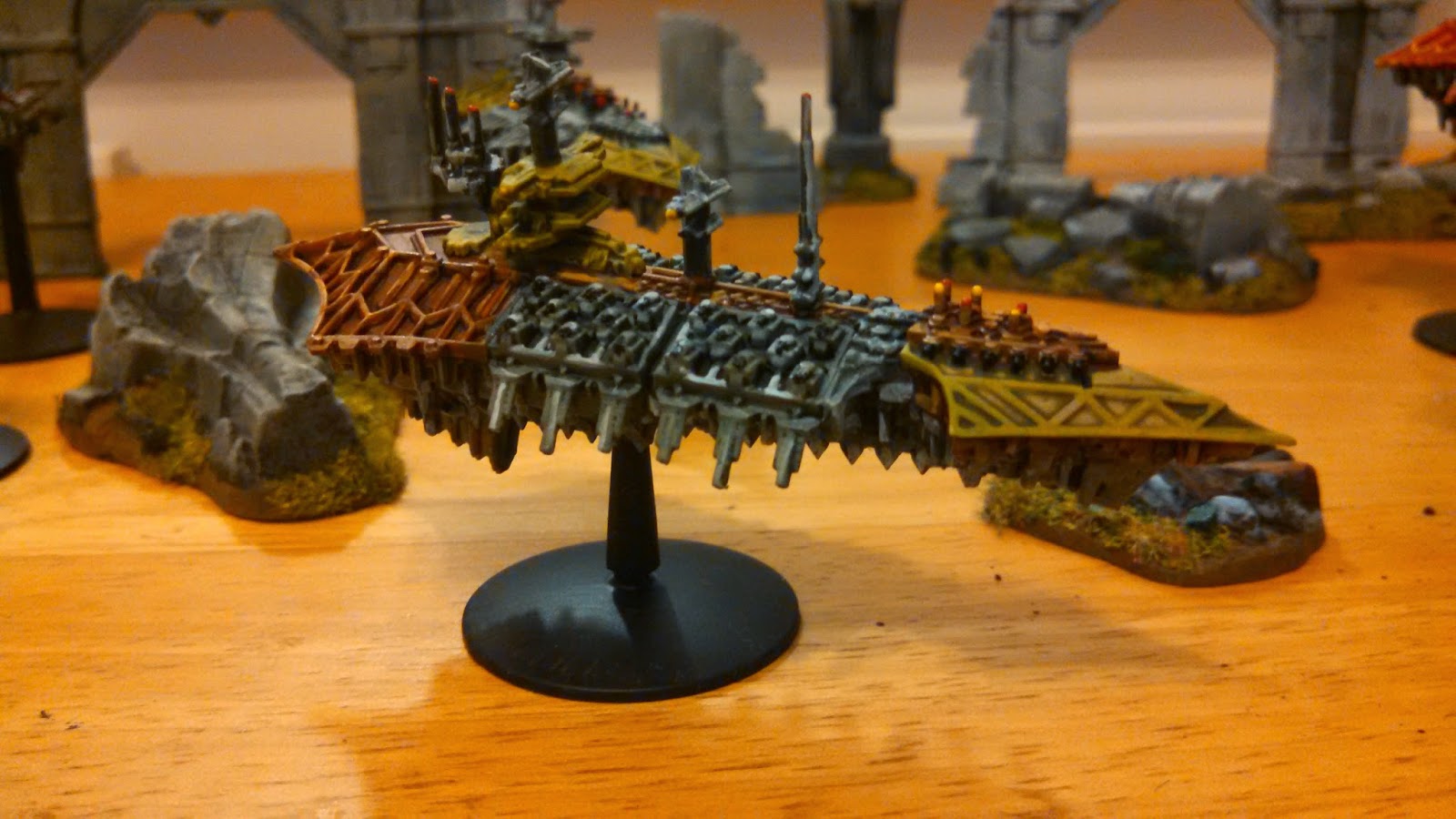 A cruiser also loaded with turrets for fire power. 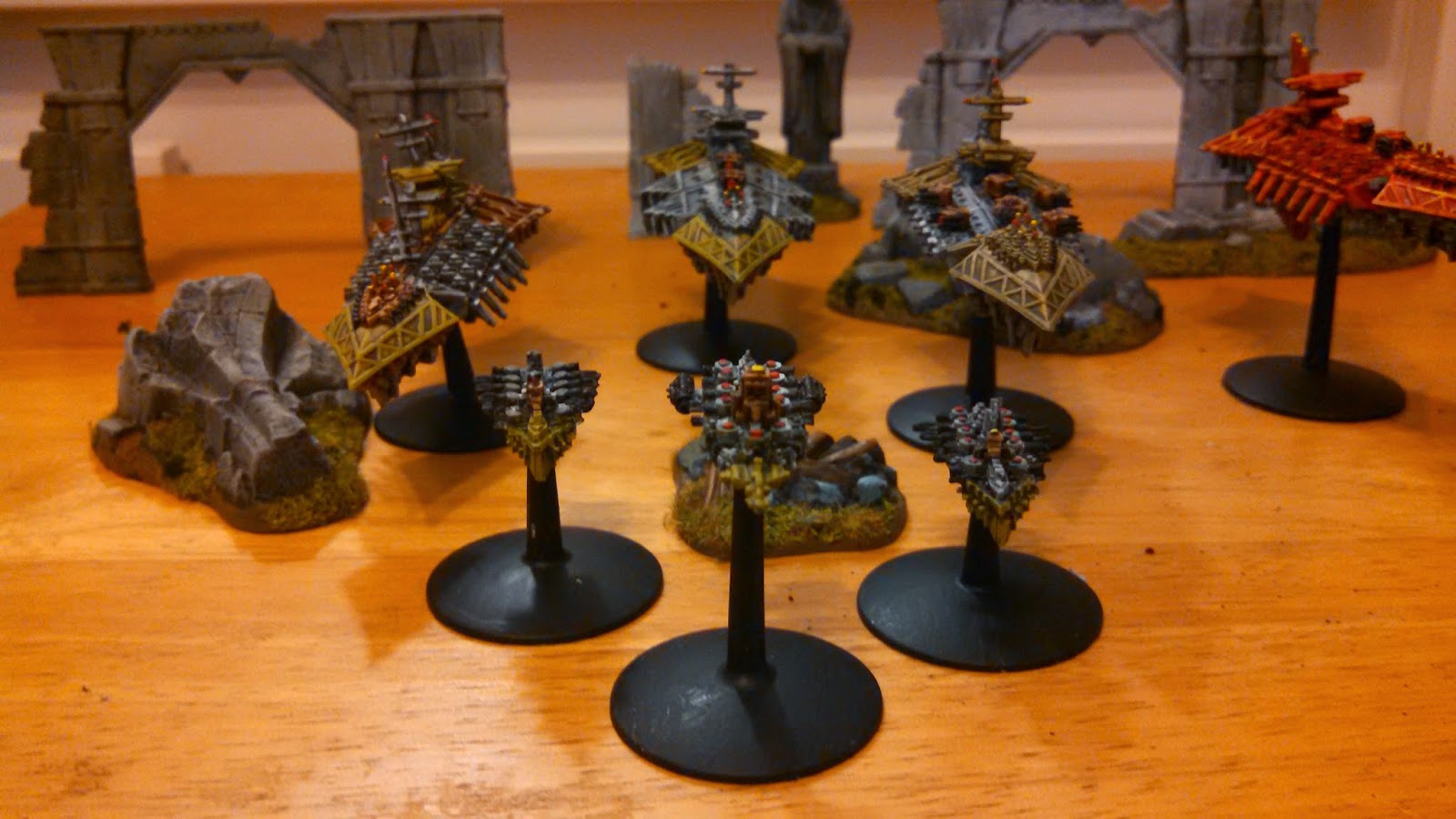 The Nurgle arm also has a trio of escort ships for screening them.
They are completed with a diseased ship packing a lot of lance turrets. 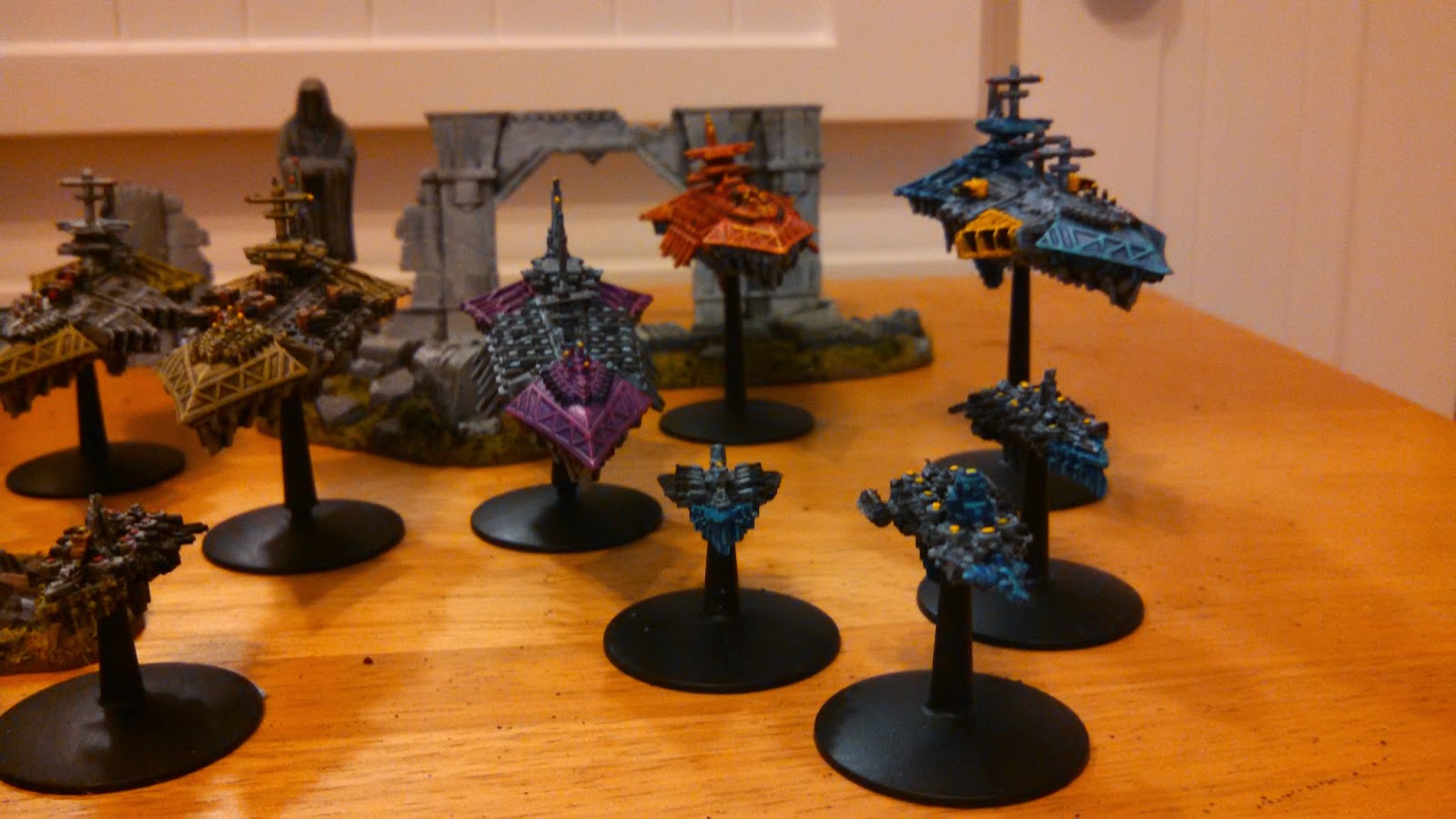 A modest fleet and a far cry from 250 points! I imagine they are a small raiding fleet. My budding chaos guard army of traitors is colored grey with accents of their chosen path coloring their uniforms.
The Chaos marines that are allied to them are the Death Guard. 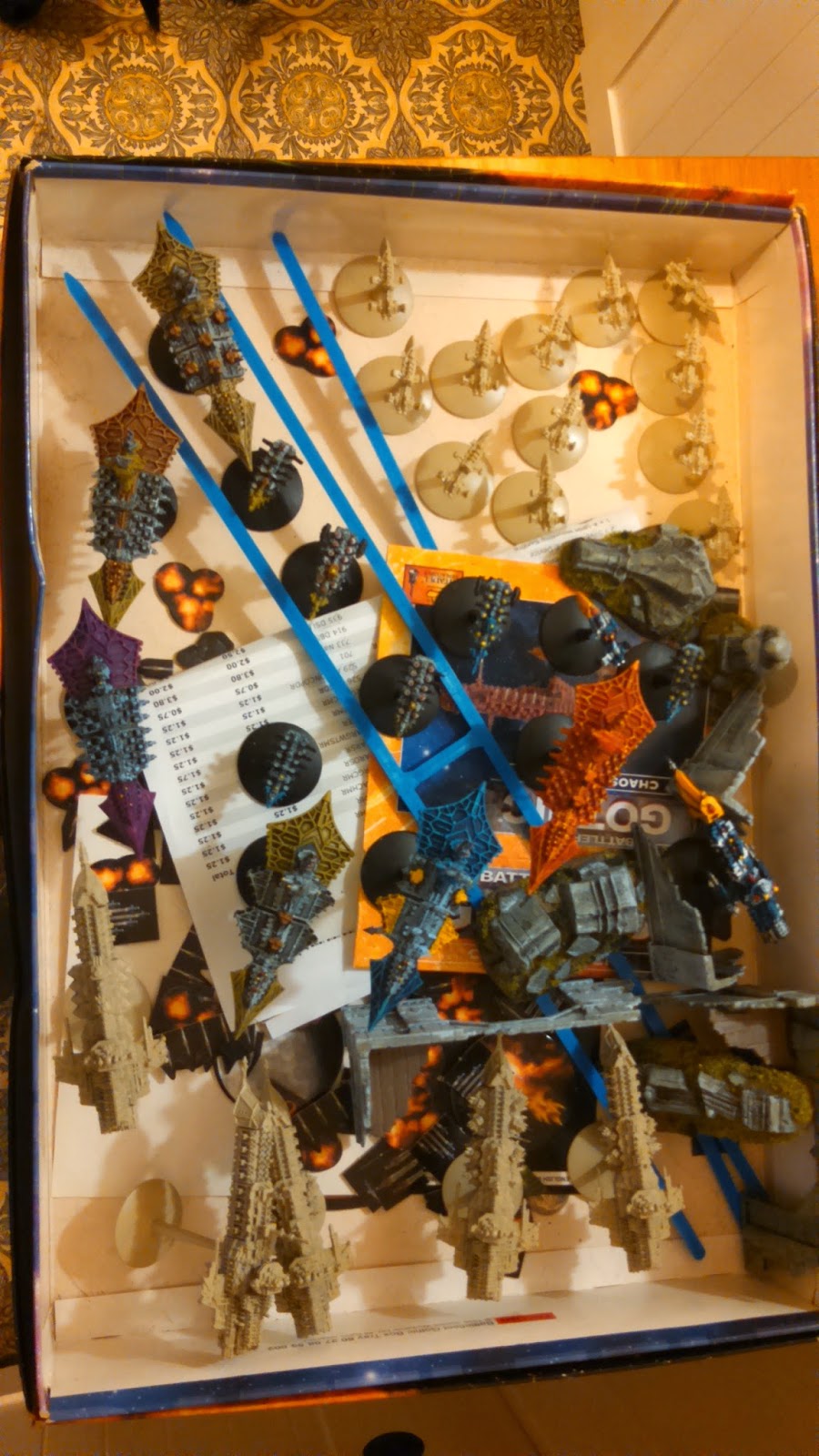 They are not going to be stored in the game box! My wife picked up a modest glass case that holds the rest of my fleets. The first Chaos and all my elder ships are long gone, hence this modest beginning of a new chaos fleet. Task force Black are the unpainted ships above. Gold and Red have been restored, but I used metallic paints on them, I'm unsure of metallic paint or NMM for these.

My original fleets were destroyed in a modular shelf collapse last century, and I stopped playing battle fleet gothic. My wife had bought me a game, several additional ships and kept them stored and hidden through several moves. It was only after I got back from deployment that she seen me finally get out the broken Imperial ships and begin repairs. That was when she surprised me with the gift! I already painted the ork ships and now I have some freshly painted traitor ships to challenge my Imperial fleet!

Am I spoiled rotten or what!? ;)
6 escorts and 6 cruisers

Posted by david bromley at 6:10 pm