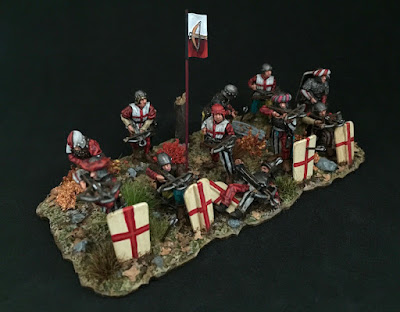 I'm trailing Peter in our 'Renaissance Men' duel so I thought I best get something off my paint table to narrow the gap.

This is a unit of crossbowmen from the Italian city of Bologna ca 1500. We see them here, shooting from behind their pavise shields, while under fire from some opposing missile troops.

I chose Bologna for a couple reasons. The first is pure laziness: Bologna's heraldic crest, a red cross on white background, is relatively easy to do freehand.

I also I appreciate Bolognese civil politics of the time. It seems that Bologna was the only Renaissance Italian city (and probably one of the few in Europe) who allowed women to excel in any chosen profession, even permitting them to attend the city's university. Also, Bologna was a center of the arts in its own right, with a residence of painters that rivaled that of Rome and Florence during the period. (In 1506 it was invaded and sacked by Papal armies, its art was stolen and its progressive civil liberties ended (yet another tick-mark in the scorecard of enlightened organized religion...).) 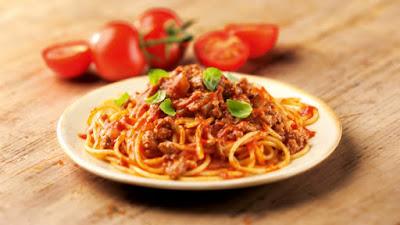 ...and finally, let's not forget that a good Bolognese sauce is in of itself worthy to fight for... 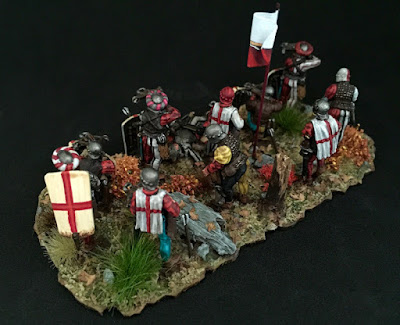 These ten 28mm metal figures are from the Perry's 'European Wars' range while the pavises (pavisii?) are from their European Mercenaries box set. 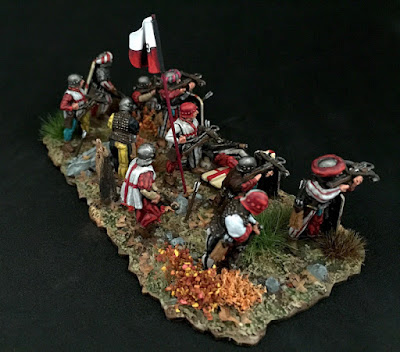 For the stricken crossbowman I used a plastic Perry Napoleonic British casualty figure, shaved off the offending detail, gave him a breastplate (roughly) made with a bit of green-stuff and then added a sallet helmet and crossbow. The city pennon is a repaint of one of the cutouts provided in the Perry box sets.

I often hot-glue a stump, boulder etc. at the back of my large bases to give players something to grip on to when moving them on the tabletop. The irregularly shaped MDF base was a sample sent along to me from Simon Miller (aka BigRedBat). He's developed these for use for his 'To The Strongest' ruleset. (Thanks very much Simon!)  For the past year or so I've been thinking of creating basing like this and so I was really stoked when I saw Simon's bases on his website. I really like the organic shape of these bases and am planning to do-up my upcoming Italian Wars collection using these in various dimensions. 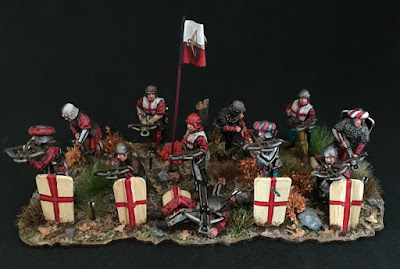 For points, there are 50 for the ten crossbowmen, 3 for the converted casualty and say 2 for the shields and banner (yes, they were freehand, but they were pretty straightforward and not very good). So 55 points for the lot.