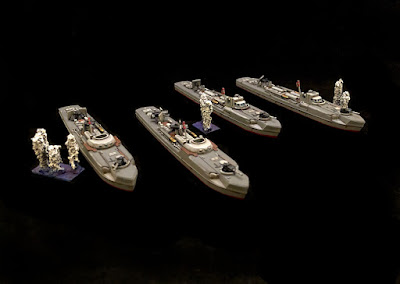 Oddly, as a born and bred prairie boy, I've always held a great fascination for naval warfare  and being an enthusiast of the large ship games like 'Wooden Ships and Iron Men', 'Fleet Action Imminent' and 'General Quarters III'. So, when I saw the promo ads for Warlord Games' new 'Cruel Seas' I knew I had to jump in with both feet.

The WWII coastal war setting really hasn't been done in a comprehensive way, meaning with purpose built rules and a full range of miniatures, so I think Warlord may be onto something really exciting here. As soon as I unpacked my copy of the 'Cruel Seas' I quickly assembled the core set miniatures and tried out the introductory scenarios with the chaps from our group, The Friday Night Raconteurs. Thankfully the hype for the game is not misplaced. The rules play very well and give a fast, furious, action-filled game without being too ponderous or 'crunchy'.

This past Friday, the first full day of the Challenge, I hosted another 'Cruel Seas' game for the boys and really wanted to get some of the miniatures properly painted for the tabletop. Thankfully I had the day off so I lashed away and managed to get most of the Motor Torpedo Boats and E Boats completed for the night's fun. So, here are four of the German E-Boats ('Enemy Boats' or as the Kriegsmarine classed them Schnellboots), a brace each of the S-38 class and the later S-100 class. 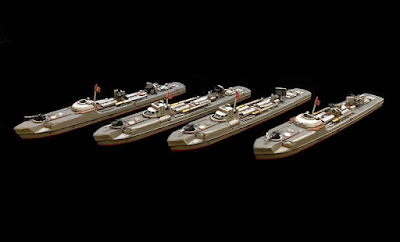 These are 1/300 scale plastic kits (those in the UK will probably have seen them included with the latest Wargames Illustrated). Very easy to put together and a breeze to paint. I like that Warlord included two sheets of ensigns for both the British and the Germans. 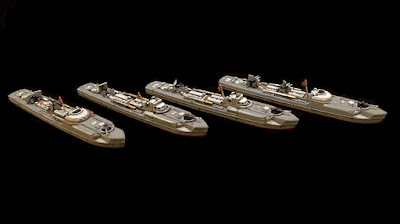 I really like the design aesthetic of these boats, with their menacing low, long silhouettes, exposed torpedoes and decks bristling with all forms of automatic weapons. They look the business.

The two S-100s here have the optional quad 20mm flak gun ('Flakvierling'), which, as you can imagine, would be a pretty ferocious weapon in setting where most of things you were shooting at were constructed of thin wood planking or thin steel. 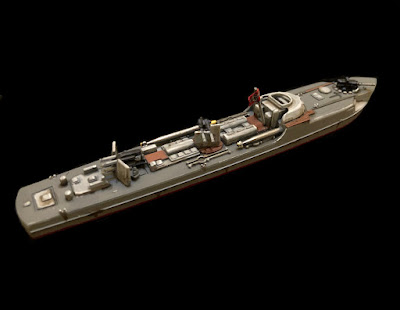 The paint scheme I went with is fairly stock to what most vessels in the Kriegsmarine would have sported. I put aside the supplied painting guide and decided instead to keep the colours anachronistically punchy to help them stand out on the tabletop. In the future I'll do up one or two boats in the distinctive (but more rare) splinter pattern camouflage to denote Veteran crews. (BTW, if anyone has a set of the MTBs/EBoats from the recent Wargames Illustrated that they don't want please drop me a note.)

For points I'm placing these at the equivalent of a 15mm vehicle, so 8 points each for a grand total of 32.

This entry should be enough for my first pip in the Squirrel Challenge and the Naval Challenge.

The British Vosper MTBs will be coming up soon but, you know, ...SQUIRREL!!

Thanks for dropping in folks!