Well Cruel Seas appears to be quite popular.  I haven't pulled the trigger on the ruleset yet due to that 10 page Errata so I am waiting for a reprint until I do so.

In the meantime why not paint up some ships?

First off I 3D Printed a 1/300 Scale Freighter off Thingiverse.  I wasn't entirely happy with some of the fittings so I trimmed them off and used a paperclip to replace some parts.  I also added 2 paperclip masts that were drilled into the hull to make them nice and secure.  For a FDM (the printer that prints lines) I am pretty pleased with this!

I have never painted a model ship before so I decided to go with a fairly generic paint scheme and I havent flagged the ship so I can keep my options open for game play. 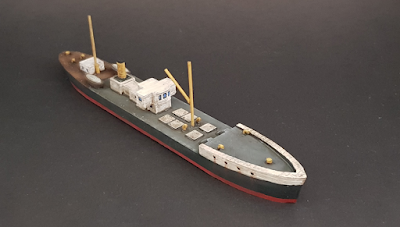 I decided my first fleet being one of the more unpopular fleets would be the Japanese.  Firstly I like unpopular and secondly they have Kamikaze boats! Who wouldn't want to play these?

Also being January, Japanuary is a most suitable and motivating theme.

The Cruel Seas Japanese Navy Fleet gives you 3 x Maru-ni and 3 x Shin'yo Kamikaze Boats.  From what I understand the Maru-ni's had a depth charge attached and would try and flee after deploying it and were operated by the Army.  The Shin'yo boats were operated by the Navy and basically were designed to slam into their target... Banzai! 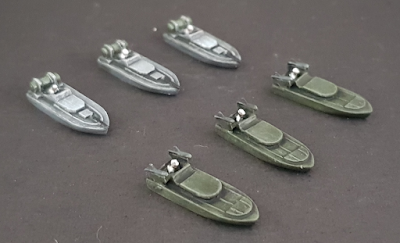 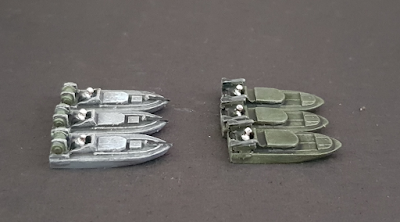 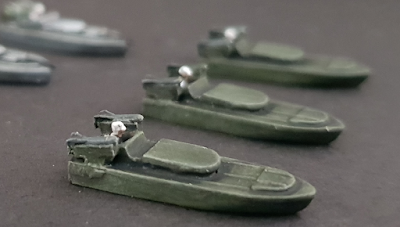 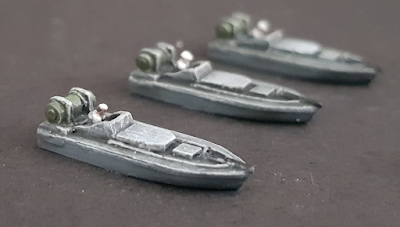 Now my apologies for not knowing how many points these should be! The Kamikaze Boats are teeny tiny.  I will be painting up more Japanese Ships for the Challenge and for Japanuary!  This should also give me 7 models total for the SD3 Engage the Enemy More Closely Side Challenge.


I'm really appreciating seeing all this new Cruel Seas stuff. They are very evocative miniatures, and these kamikaze boats especially so. I believe there are sail-powered boats in the Japanese fleet- that takes guts! I think that 3D printing is taking off, and your lovely clean print is proof of this.

I've scored these as 6mm and 28mm vehicles, so that's a solid 32 points.
Posted by Left Handed Panzerfaust at 6:00 pm