A while ago (September) I bought this jeep from Grubby Tanks (Britannia) Assembled it and then lost a part. So one part of this model is actually from a different manufacture (Frontline). It's a clearly visible piece and for me it's loss and now replacement has improved the vehicle as it adds to the beat up grimy shabby look which the crews and vehicles developed. Many things in the Western desert were of a "Make do and mend" approach and very little of the "Long Range Desert Patrol" was factory finish. And after the first month almost nothing at all. 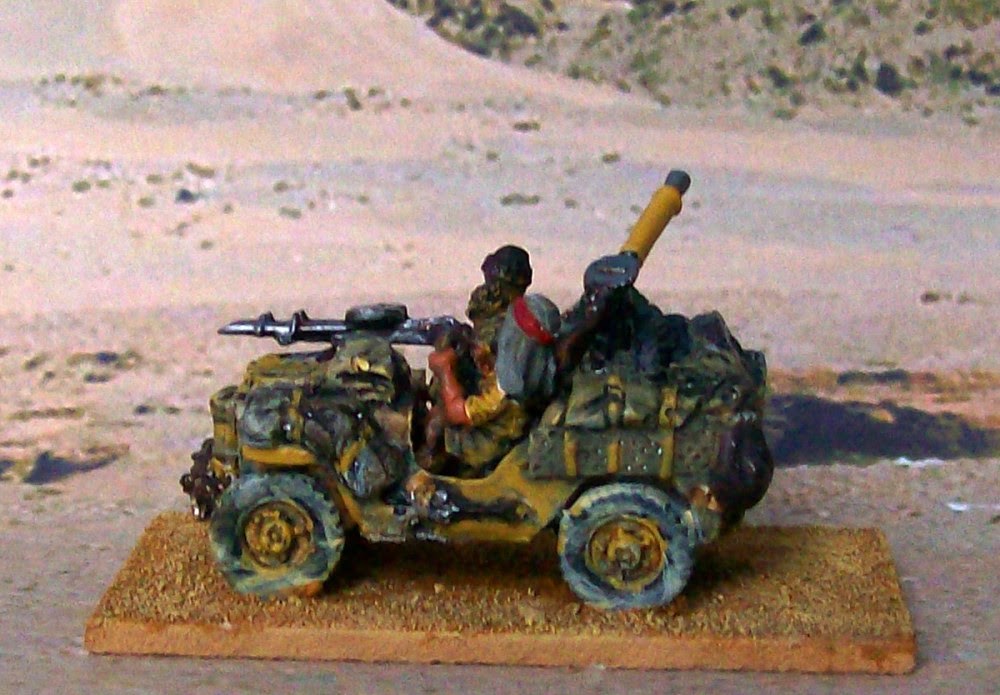 As you can clearly see the vehicle is heavily armed with twin Vickers K Machine guns for the co-driver and a Lewis gun in the back, so 2 crew and three machineguns. Considering that the main task was "Road watches". To determine the enemy strength and most importantly fuel lorry convoys, were they full and in which direction where they headed, as that would determine the most likely point/week of attacks. Many people might consider more machineguns than crew slightly overkill. Wargamers and roleplayers would NOT! You can never have too many guns!

Jeeps were used as command vehicles as opposed to the more common Chevrolet light truck so one would not expect to see one of these on it's own. It did happen of course but was not the preferred transport across the desert solo, but needs must and all that. But generally it would be travelling with 1-4 light trucks. Most commonly 2-3 light trucks.

I have deliberately kept the painting on this quite rough. Well that's my excuse. As the vehicle and crew do need a lived in, been too long in the desert feel to them. I will need to get some more of these vehicles from Andy Grub (Grubby Tanks)  as he does a range of 4 other light trucks each with different armament combinations and stacks of stowage. That will have to wait till February at the earliest.

From Curt:What a wonderfully scrappy looking jalopy! Clint, is the stowage part of the casting or did you add it later? Whatever the case it looks great and I also like the tanned/sunburnt crew - a bunch of tough nuts to be sure. I hope we see some of the Chevy WBs later in the Challenge.