The FIW Campaign "Frontier Aflame" that Dux and I are prosecuting against one another is intensifying, and so is my need for reinforcements!  Here is the first detachment to arrive on the scene: a unit of British Regular Infantry - classic Redcoats. 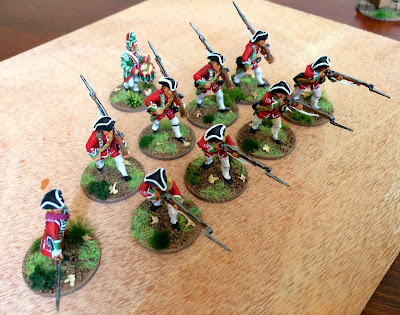 Like last week's Light Infantry, these chaps have the light green facings of the 24th Regiment of Foot (mirroring my 15mm Zulu War army).  Unlike my Rangers and Indians where I piled terrain on their bases to reflect them being deep 'in the woods', I've left these guys with a minimum of detritus to reflect them being more in more open terrain as regular troops. 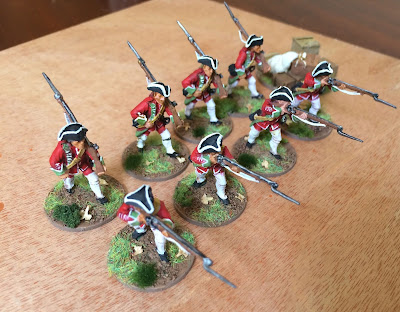 Remarkably, they survived the first battle this week with only two losses.  But only by the skin of their teeth as they made a tactical withdrawal under a hail of tomahawks with a screen of skirmishers protecting them.

Commanding them is the dapper Major George Brinkworth.  A former Gentleman ranker, under the Sharp Practice 2 random character generation process, it was revealed that he has the "Impressive Weapon!" skill - something that I remind Dux of with unfailingly humorous regularity! 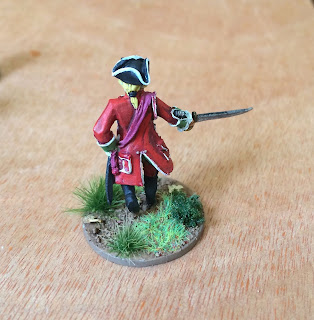 Major Brinkworth is supported by a drummer who helps relay his orders in the heat of battle (this provides a control bonus in Sharp Practice 2).  I really went to town with the lacing on this fellow and it darn near drove me mad. He looks good though so it was worth the extra effort. 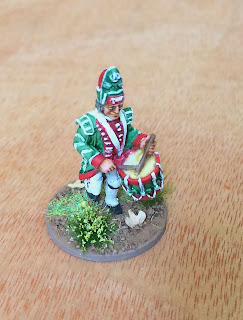 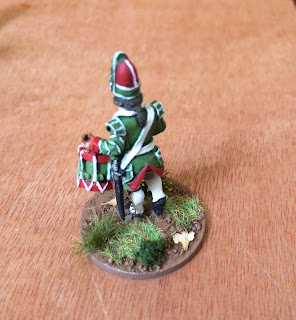 All figures are 28mm by Warlord Games. Pile of supplies from my bits box. 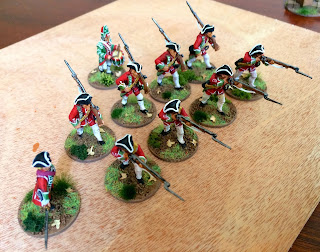 Wonderful work Paul! Your 'Frontier Aflame' campaign with Dux sounds like an absolute blast and, hey, no shield-shaming while still having all the benefits of sporting an, erm, 'impressive weapon'! What's not to like, right?

All of your attention to detail has paid off with these lads, Paul, especially on the drummer and Maj. Brinkworth. Very clean brushwork. I also like the differentiation in the groundwork between your bush skirmishers and these close-order fellows from the Line.

This detachment of British regulars will give you 51 points, with a pip added for the fella maintaining the beat. Well done sir!