One of the projects that I have most been looking forward too this year is the creation of a Mechanicum army for Warhammer 30k.   I have looked at the Mechanicum force for years and loved the overall look of the robot portion of the army, but just hated other portions of it.  Enter the Legio Cybernetica list this past year, which is a Taghmata variant that focuses on robots!  Hurray!  I can make a list with just robots, sign me up! 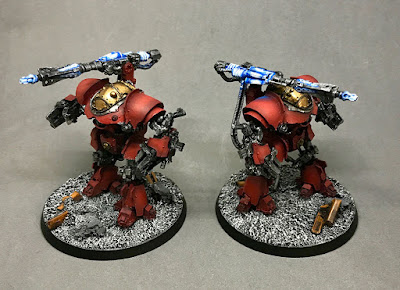 The project is a little strange though, as I really dislike both V7 and V8 of Warhammer 30k/40k and think the rules and balance are insanely bad.  They are bad to the point that I believe someone had to actively try to make them as bad as they are on a bet....  I can see the hive mind that is GW corporate sitting in an office going "Let's prove to the public that we can do whatever the F!@$ we want, make the rules complete sh*t, and people will still buy our models."  Well, case proven GW.

Anyway, enough on the rules, the models rock!  I love the bonkers look of these walking death machines, and love the fluff even more.  You basically have the masters of technology sitting on Mars thinking that people are idiots and machines are great, so lets turn people into machines.  Sounds great to me, since as a techie I trust machines far more than I trust people!

This is the first batch of two Castellax Class Battle-Automata that I finished and they are wielding the evil looking Dark Fire Cannon.  I honestly have no idea WTF they do in the game, I just got them because I liked the look of them!  Once the force is done and they have to go on the table, I will have to look them up. 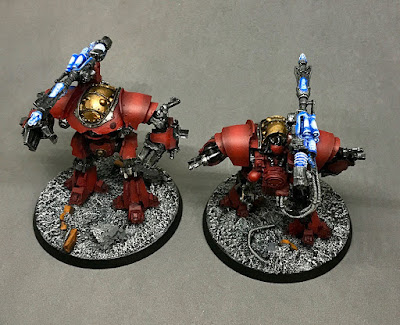 Overall I am just aiming for effect on these and not going to spent a ton of time on them.  I am aiming for game pieces not show pieces so a lot of the details are not getting painted, I am using a lot of shortcuts and quick steps on them, nothing special close up, but hopefully good looking on the game table.

I wanted the entire force to look the same, especially with the reds which I find very hard to get looking right, so I have airbrushed all of them at once, and will be working on the details over the course of the challenge.  I wanted a dark brick red base, but wanted highlights to show on all the larger pieces, so started with a dark hull red base, then worked up to a gory red, then a light glaze of red, and finally an even lighter coat of sunny skintone to lighten the very center of the panels.

I see these robots as basic machines with lots of metal and therefore did all the mechanical bits as black, then oily steel, highlighted with silver, then washed down with engine grime from the AK line.  I painted the central canopy / head area / whatever it is bronze, then highlighted with copper, and then washed it down with a brown wash.

At this point I was almost done, but something just didn't look right.  There was too much silver and red and no contrast colours.  While I had not planned on any other colours, I felt it needed something so went back and added some quick energy blooms on the weapons in a blue to white fade to try and show high energy expenditure. Not sure if blue / white was the right colour choice or not, but it certainly stands out, which is what I was looking for. 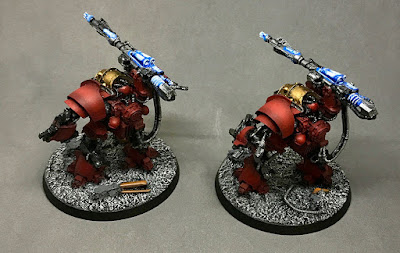 Last up was the bases.  I had initially planned a red martian soil base, but thought it would just blend the model to the base rather than making it stand out.  I changed it last minute to a simple black / grey rubble base using cork, bits of sprue, guitar string, plasticard, and liquitex.

Expect more of these robots as the challenge goes on.


Also, I haven't figured out for sure if I want to do chipping or scratches on the armour plates, so I may do that later.  The same with weathering powders on the legs, but I want to get all of them done before doing that so that they all have the same mixes of powders on them.  If I decide to do that, I will post some more images once everything is done.  Until then, let me know your thoughts on those two things, should I chip them up and dirty them up, or should I leave them clean?

Anyway, belated Merry Christmas everyone, hope everyone had a good holiday with family and friends yesterday.  I am now back to the brushes trying to get another entry done today before going out to my Mom's cabin for a few days.

Welcome back to the Challenge, Byron!

These Automata look excellent. The red armoured carapace turned out very nice, but you're right, the heat-bloom of the energy weapons really helps them pop - a very cool effect. I have a 6mm Mechanicus force for Epic and agree with you on the overall aesthetic: the robots, titans and vehicles look brilliant, but the cybernetic stuff needs to be closer to John Blanche's original vision of them being a horrific, quasi-skeletal/insectoid blend of machine and human. I look forward to seeing more of your emerging Taghmata in the coming months.

We've been scoring things like Warjacks and Dreadnoughts as vehicles recently, so we'll stick with that. That makes it 30 points for the pair. Well done, Byron!