From BenitoM: Bring up the PIATs! (20 points) 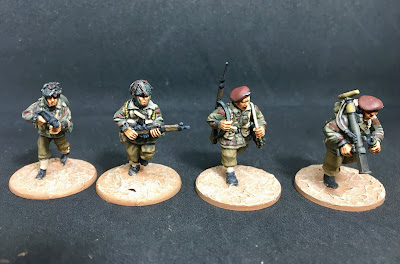 A new “stick” of the British Paratroopers is about to land in the DZ. Having concluded the models for the HQ section and some of the leaders of the different infantry sections in the two previous posts, I’m turning now my attention to some of the support weapons.
The entry today is a PIAT and flamethrower teams respectively.
The British portable flamethrower was a very effective weapon to add punch to the paratroopers in their offensive actions, although the fuel capacity was slightly limited. If you’ve watched A Bridge Too Far, you may remember the scene when the flamethrower team attempted to bring down a bunker at the bridge, failing to hit the target but putting to fire an ammo deposit just behind… 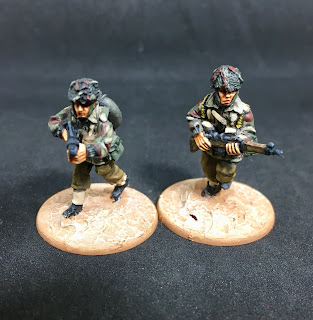 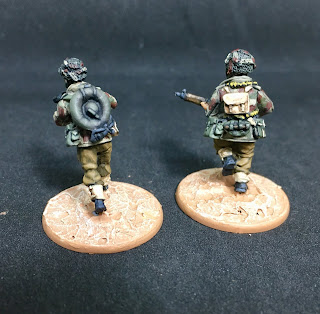 PIAT’s (Projector Anti Tank Infantry) were the main portable anti tank weapon. Built on a spring-recoil mechanism similar to the mortar, it was not very reliable, only effective engaging the enemy at very-very short distance (less than 100 meters, which required a high dose of bravery).
In addition and when carried in gliders, it was subject to malfunction as the weapon tend to bend easily during the rough landing phase (in the Pegasus Bridge operation apparently only one survived, the rest were rendered useless) 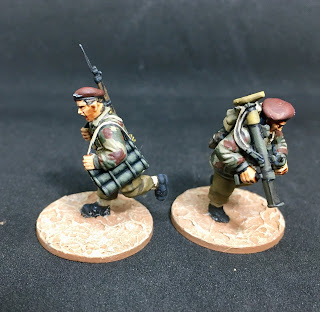 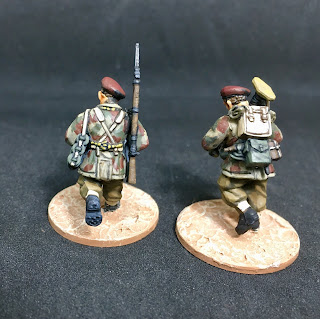 The models are 28mm from Warlord. The flamethrower team is from a support weapons blister in metal. The PIAT team is built using the multipose options included in the British Airborne plastic box.
With these four models I add another 20 points to my score, rising now to 60 points which I consider very satisfactory given that the Challenge is only three days old. Unfortunately I won’t be able to maintain this rhythm when the Xmas break ends.
I take this opportunity to wish all challenges a very Merry Christmas in the company of your beloved ones.
________________________

Again, lovely clean lines on these paras, Benitio. I especially like the PIAT gunner and the flamethrower operator - those are great looking minis.

As you say, 60 points is a great start to your challenge. Well done!

Happy Christmas to you and yours, Benito!

Posted by Anibal Invictus at 11:41 pm