This weeks progress on a couple of projects. First up my cargo vessels for Cruel Seas . Last year I picked up some old skytrex stuff from a bring and buy - they are 1/1200th ,but still reasonable size. They are around 6-8 inches  long, mix of metal and resin kits

I think that will do nicely for a target rich environment - just need some suitable escorts.  I have a couple of British destroyers and one German the same scale as the freighters - I will do them later I think. I have been looking at full 1/350th size models for this - seriously tempted ... but not sure how the Tirpitz or Warspite will go down with purchase order control.... I just will have to content myself with completed the work on a couple damaged and sinking MTB/ S boats


plus - 16 Torpedos - this time I have done them in batches 4 colour coded. In the game you fire and don't forget as the torpedo moves when its launching vessel does - this proved a bit of memory problem as to which torpedo was which in recent game ,  so hopefully  it will allow them to be identified going forward - need to go back a redo the others now!

Next up is a long awaited top up of infantry for my US Armoured forces. I have had these Plastic Soldier Company ones undercoated on the desk for at least 6 months - as I have come to hate painting them , they are too thin, and spindly , as a result  they have been kicked down the queue too many times . I am pleased to at least get them done .This gives me two full platoons worth for gaming . I will replace these PSC ones with something better in due course. 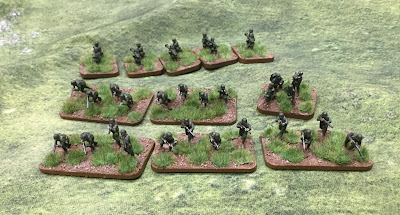 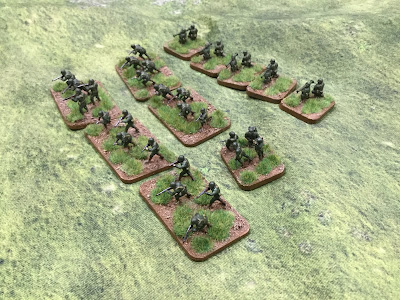 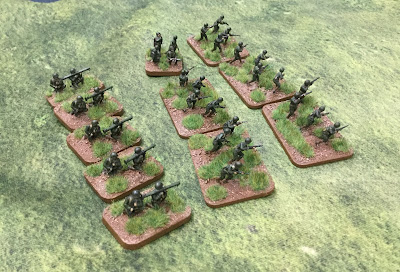 That assortment of freighters looks great. As you say, the scale difference is not really a big issue - they're big floaty things. Our gamers' eyes often allow for elasticity in scale, so why not here. I need to get my 3D printer warmed up so I can get some similar targets in the water for our group.

The colour-coded torpedoes look great and are a good idea. A nice way of avoiding confusion when you have several different 'fish' in the water. Nice!

I know you didn't like working on those PSC yanks, but they do look very good. That being said, I can sympathise with your feeling of not wanting to work on figures you just can't get into. I have a long queue of these that I'm waiting for the worm to turn. Congrats on getting them done and off the table!