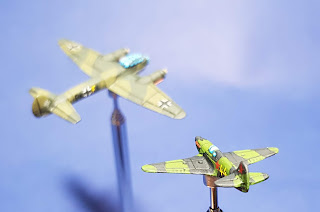 While my focus for this challenge has been fimly set on my 6mm Cold War project, I also wanted to get some extra bits and pieces for my Bag The Hun 2 forces completed. After visiting Russia earlier in the 2018, I wanted to add a small Soviet force to my Germans, British, and French.

I like to play the underdog in wargames, and has there ever been an underdog like the poor Red Army Airforce (VVS) in 1941? Tales of brave little Popalikarov I-16s fighting against overwhelming numbers firing till their ammunition is spent, then ramming enemy bombers are pretty stirring stuff - even if overblown by Soviet propaganda.

So, here's the first half of my Soviet force. All of these aircraft are from Scotia, with decals from Flightdeck2400. I really enjoyed painting the little patriotic slogans on the sides of these aircraft.

First off, here's a section (or zveno) of Lavochkin LaGG-3s. The LaGG-3 was well armed, but under-powered and often outmaneuvered by the Fascist Messerschmitt Bf.109Es and Fs. 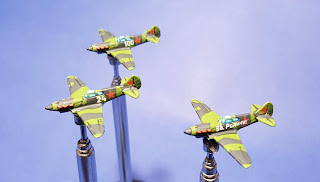 Next up, the Yakolev Yak-1. These were armed with machineguns and a 20mm cannon, and held their own against the Fascist invaders throughout the first years of the war. 'Yellow 44' is painted up as the Yak flown by Lydia Litvyak, the 'White Lily of Stalingrad', the first female fighter pilot to shoot down an aircraft, and still the highest ranking female fighter ace. 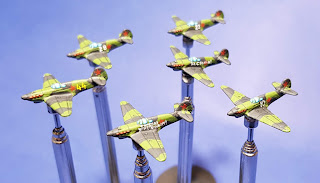 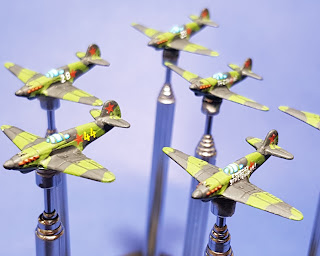 I've also got three Mig-3s,  Popalikarov I-16s, and a brace of Tupolev SB-2 medium bombers in the painting queue, so look out for them.

By my reckoning, the total for this entry should be:

Next up, some more 1984 fast air and some more Soviet armour.

You're smashing these 6mm vehicles out of the park, Ben! I'm impressed by the graffiti on the fuselages as well. Another few bonus points to bring it to 20, and I can't wait to see what microarmour project comes next.

Barks
Posted by Ben Fiene (Ansbachdragoner) at 11:00 am