A second entry for this week, in this case a group of samurai-era figures from the Perrys and some terrain from Sarissa Precision. 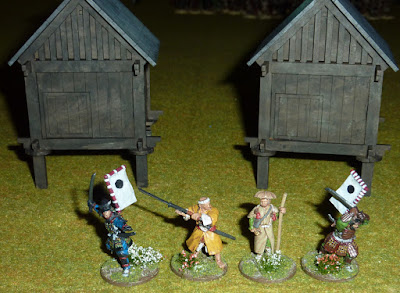 These figures were originally intended for the Water Feature bonus round along with some water-filled rice fields. Sadly some evil kappa decided to curse my efforts and my rice fields were rendered useless. So, standing firmly on dry land, I have 2 samurai, a warrior monk and a travelling priest. Behind them stand two storage barns. The barns were lifted up off the ground to help dry out the harvest and to help keep pests away. 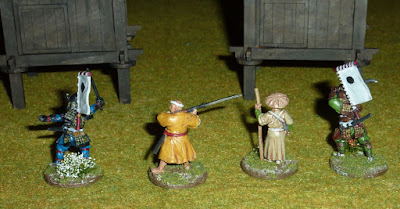 Samurai are one of those forces that look magnificent when you field a fully painted army of them. They are also one of those forces that make you question your life choices. The Perry's don't help matters by sculpting their figures so well. So many small details, so very very many.
The samurai are both sporting 'sashimono' (the small flags on their backs), these are painted with a small black circle in the top half. This symbol is a simplified version of their clan's 'mon'. In this case, the black circle denotes the Kuroda clan. The Kuroda clan served the Toyotomi clan during their invasion of Korea and then later took the side of the Tokugawa during the battle of Sekigahara.

Sashimono were used to identify friendly troops in combat, since armies during the 'Sengokujidai' (warring states period) very rarely wore uniforms. They were usually only worn by melee troops, being quite heavy and liable to blow about in the wind, they made firing a ranged weapon more difficult.

These figures will all probably be used for Ronin, as and when I get round to playing it again. 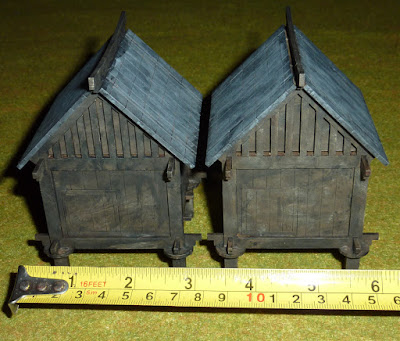 And to make the life of my assigned minion a little easier, I have included a tape measure to provide some size information for the barns. They are 6" wide in total, 3" deep and 4" tall at the highest point, so about 1/4 of the standard 6x6x6 cube.

Now this is how to get on the good side of a minion, always give the measurements. Thank you, Stuart!

Your quarter-cubesworth and the four figures nets you 25 points, plus an extra for the mon on the two samurai.