Death Troopers were one of the cool things to come out of Rogue One- Stormtroopers who were actually menacing again. I thought I'd be able to get away with a bit of drybrushing, but wound up being more satisfied with some edge highlights in light grey. Thankfully, there's only four of them.

I'm a bit of a fan of Grand Admiral Thrawn. A pragmatic thinker, a devestating opponent, an appreciator of art, a commander who cares for his men, a non-Force-user, and a senior officer who has defied the systemic xenophobia in the Empire. He was fun to paint as well. 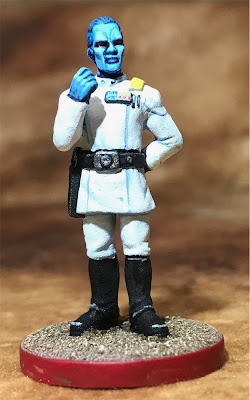 Well, some more fine work from the Star Wars universe - indeed, as Barks as noted in the appropriate title for his post, this is a "Star Wars Saturday".

Sadly, I must confess that the force is weak with me - "Death troopers" are a whole new thing to me, although they certainly look menacing. Stormtroopers who are "actually menacing" - that would be terrifying to the universe, wouldn't it?

Thrawn is another character I have heard and seen references to, but never understood or followed closely.  But I quite enjoy your description of him! Some blend of Renaissance Man, Imperial warships and a unique tint...your painting captures your description of him well.  He looks to be contemplating something rather deep, if non-force related.

That is fine, fine brushwork all around. Highlighting something that is mostly black is always tricky, and highlighting a fellow in a crisp white uniform - why, that is even trickier in some ways! 25 points well-earned!