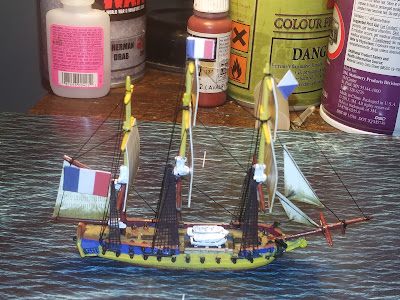 Black Sails is something of a hot new game I love naval games but had been shying away because I didn't think anyone in my circle would jump into it. then I saw JohnM was building a Spanish fleet So I decided to join in as well. I picked up the "Master and Commander Set and then the Frigates a brigs set so expect to see more. 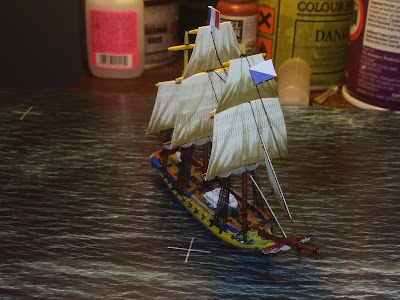 I decided I would focus on the Quasi-War painting up French and American Ships. The Quasi War is great because the engagement are small and only involved ships of the Frigate class or below.  I started with the French in part because I wanted practise before doing my American ships.  The French colors are brighter but simpler making it a good start. 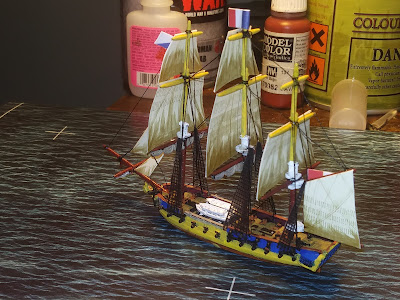 This is La Vengeance a 40 gun French frigate that fought USS Constellation to a draw on the 1st of February of 1800 The ship was latter captured the British and had an inglorious as HMS Vengeance (Prison ship). 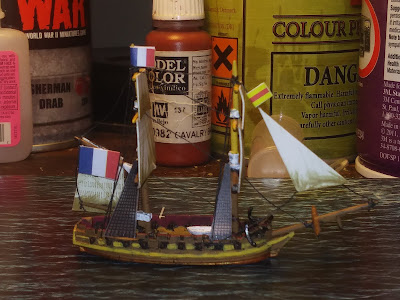 Here we have a French Privateer Brig that I have named Blonde (Fair Lady).  I didn't use any navy's painting scheme here I just made one up. 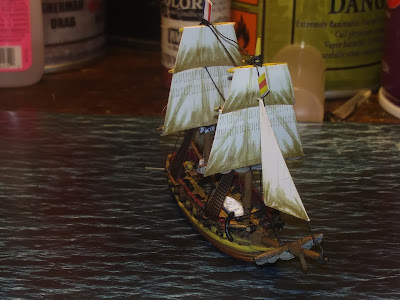 The brown hull highlighted with a yellow stripe running down above the water line and across the gun ports. 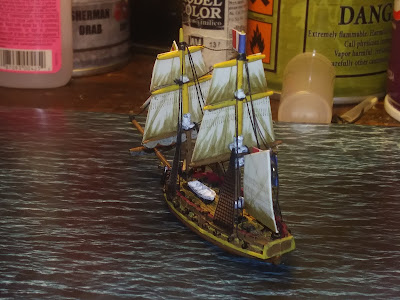 Unfortunately the ship looks becalmed as I didn't billow the sails it was my first effort and it a noticeable if not too major error. 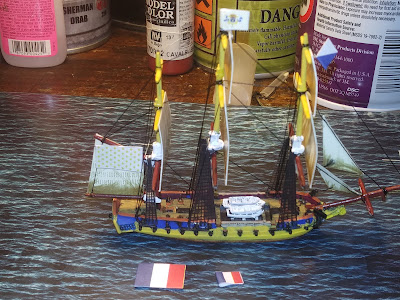 I magnetised the flags so I can swap them out so these ships can serve the Republic/Napoleon or Bourbons.  I could also press these ships into Royal Navy or American service if I need them I'm quite proud of this solution.  I'm pleased with the result on these the rigging was done by me and that was a pain but worth the effort. The ratlines come with the ships they work perfectly with the brig but need some modification to work on the frigates. 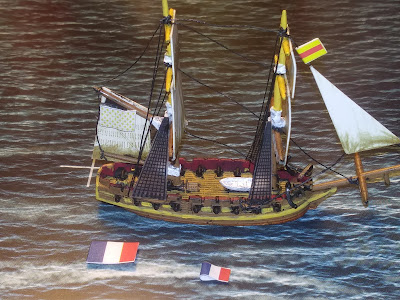 Points we don't have any particular scoring for 1/700 scale ships fortunately I am not the first to submit a black Seas Brig and the 10 points suggested (and awarded to Noel) seems reasonable. 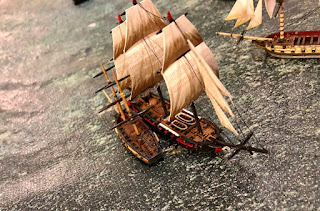 The Frigate is significantly more complex and larger so maybe 18 points?   I forgot to take a picture of the two ships so I borrowed a picture form JohnM's blog to show the difference in size and complexity. So if the above is accepted it would be 28 points for he ships plus another 30 for the map site so 58 points.
This is a new project with sails to provide power which are supposed to be grant some sort of bonus at this site. So 58 Point +Sails+New Project ???? I hope I don't look like I'm begging for points.

This is great Adam, you are certainly on a grand tour of the island. The flag idea is a cool one and you don't need to beg for points, at this rate you will have been to every location and be looking for a new continent to explore. I'm happy with your points calculation and will add another couple for the flags
Posted by AdamC1776 at 4:12 am