One thing I really love about 3D printing is the possibility to get my grubby mittens on stuff otherwise not commercially available in 28mm. And I can scale it to my own visual preference as well...

These three vehicles were part of a Kickstarter and actually the main reason I jumped in. Civilian or better civilian cars in army service are pretty hard to come by, even in 1/48 let alone 1/56. And if so they're pretty expensive too. Rubicon Models do a Citroen Traction Avant 11CV which admittedly looks a lot nicer than these models but seems to be sold out most of the time... of course not since I backed this Kickstarter though. 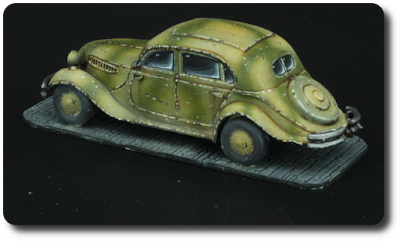 Anyway, for gaming models/ terrain pieces these are just perfect and are definitely a lot cheaper than their commercial counterpart. And as I said, you can scale the files to your liking and that's just what I did. Ever since having had a mate put a 1/48 Opel Blitz on the gaming table which towered over both terrain and figures I came to loath all the 1/48 is the "perfect" scale bogus and thought this just the right opportunity to proof my point. 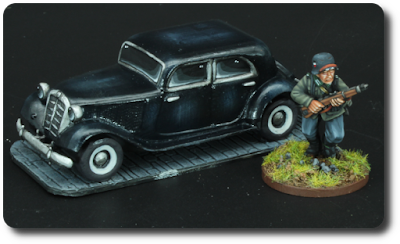 My first test piece was this Mercedes V170 printed to match 1/56 exactly. But admittedly when painted and compared with my figures it looked a little too tiny for my liking. I couldn't really figure how two figures could actually squeeze in the front next to each other. So looks as if I might have been wrong after all... 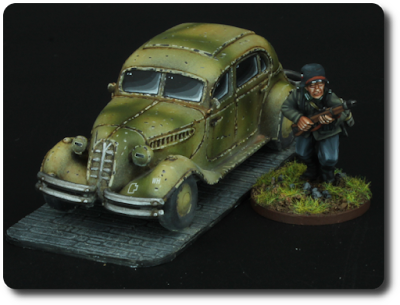 This BMW 326 was scaled to 1/48 and initially was the one I liked the look of the most. But when checking sources online I realised it was much too high(by about two heads), even if it'd fit quite well width wise with the bulkier wargaming figures. 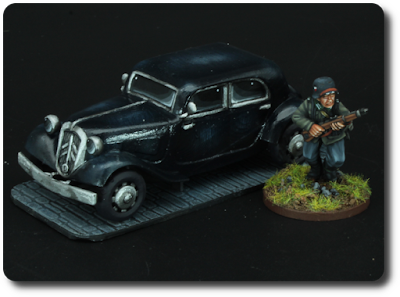 With both extremes tested I thought I might try something in between and printed this Citroen 11CV in 1/52. Now comparing all three I think this is the one I like the most as it sits nicely in between 1/56 which is actually too narrow for wargaming figures and 1/48 which is too tall.

So what did I take away from this? Well, obviously there's no such thing as the perfect scale for 28mm wargaming figures. As ever it comes down to personal choice. The one prefers his models to actually look as if the figures could actually squeeze in there, while the next (like me) doesn't like it when his toys are too high and too long. If we were totally consistent we would have to field vehicles which were roughly 1/48 in width while just 1/56 in length/ height... and that'd be a rather ungainly sight I bet. Maybe I should still try to print one such abomination, just for reference purposes though.

So, with yet another pet peeve out of the way (there are obviously quite some references to Y-webbing as of late ;-) ) I claim 60 points for three 28mm sized vehicles.

DaveD - Ok then.. scale, scale,scale.. is 28mm a scale or a size description - discuss... - this can indeed go on endlessly in this hobby - but i do think your visual "test" is a great one. I agree the 1/52nd looks best. you have done as usual a great job on bringing them to life.

I do hoped you have loosened that Y webbing though..the chafing may get rough if the rivets take a while to count ;-)

right with that i am packing in my shift as i have a stoopid silly start time in the morning - so i will leave you to tender mercies of the Thursday rockmeister MartinC. I suspect you will be threatened with a test.