As promised here is the fourth entry for this year. The are 5 vehicles for the Early War Germans I started this year. They from different manufactures and I'm not sure which one belongs to which manufacturer. The Opel Blitz are metal the other ones resin. 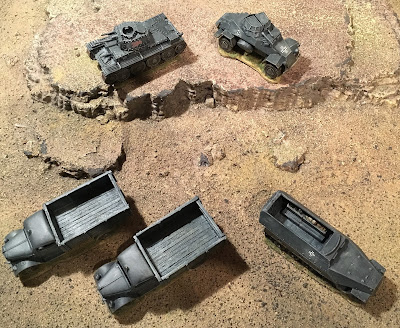 The Panzerkampfwagen 38(t) was originally a Czech tank of pre-World War II. The main advantages of the Panzer 38(t), compared to other tanks of the day, were a very high reliability and sustained mobility. I really love the look of this panzer. Maybe because the design was not German... 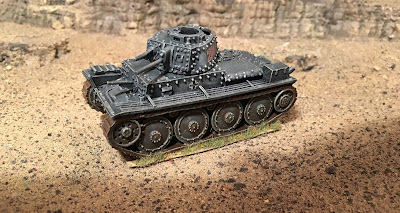 Sd.Kfz.222 light armored car was a modified version of Sd.Kfz.221 designed to carry20mm automatic cannon instead of a machine gun. There were a few in Poland, but more largely represented during the Western campaign and in France. On a good road network they excelled, and were seen many times by Allied soldiers and officers -to their astonishment- well beyond the supposed frontline, creating panic and havoc, thanks to their speed and devastating main gun. 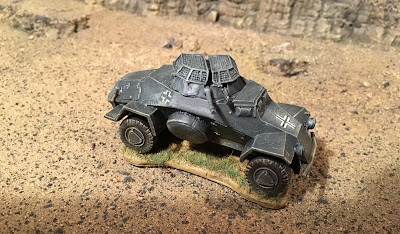 SdKfz 251/10. This vehicle was a familiar sight, widely associated with the German infantry

during all of World War Two. No German force can do without. 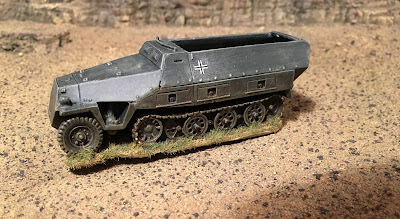 Opel Blitz – the workhorse of the Wehrmacht. In the period from July 1937 to August 1944 more than 100.000 trucks were build. Blitz is German for "lightning"and was the name given to various German light and middle-weight truck series built by the German Opel automobile manufacturer between 1930 and 1975. The original logo for this truck, two stripes arranged loosely like a lightning symbol in the form of a horizontally stretched letter "Z", still appears in the current Opel logo. 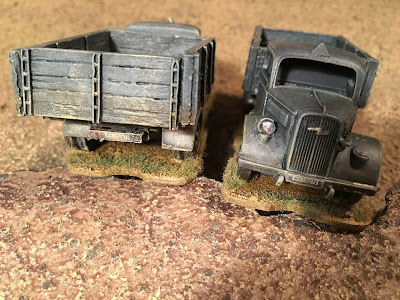 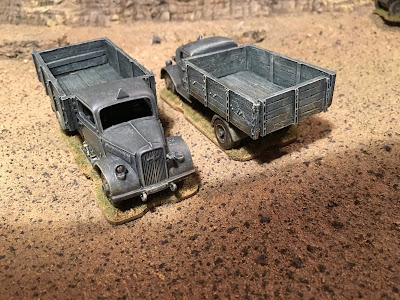 A brilliant set of vehicles Jake! The 222 is my favourite armoured car, but I have to say I love seeing the heavily riveted 38T - you look at it and it plainly says 'I am a Czech workhorse'. I also really appreciate the little background history you provide with these vehicles - very interesting that Open still uses the WWII design elements in their current logo, I did not know that.