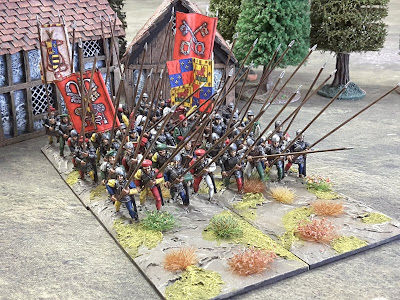 This week I have added a second pike block to the one I did earlier in the challenge but there are quite a few differences between this one and the earlier entry. 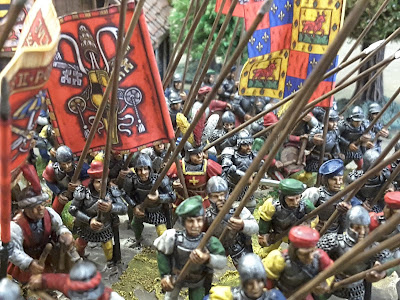 Where as all of the foot figures I have used so far are from the Perry's these are from a Company called The Assault Group or TAG as they are more commonly known. Still 28mm and similar in proportion to the Perry figures they are slightly smaller and a lot "cleaner" (there is a comparison at the end of the post). 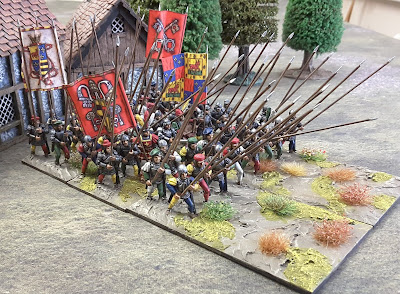 I have to be honest and say that while I was painting these I really wasn't very sure how they would come out, no criticism of the figures but the flatter less contoured sculpts of the TAG line don't really fit well with my painting style and I wasn't sure on the faces either. However when I came to photograph them this morning I was more than pleasantly surprised by the outcome. 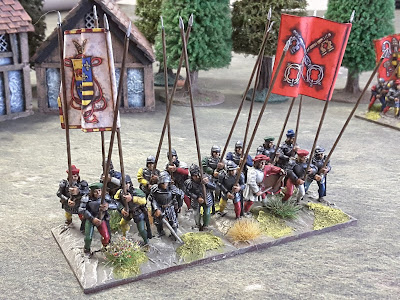 The pike on the rear ranks are quite upright and the figures have a bit more armour on than I would like for this far back in the Block but I'm nit picking. 8 figures per base on 60mm x 50mm mdf. Flags are Petes a Borgia Crest in white and the Papal Cross Keys in Red. 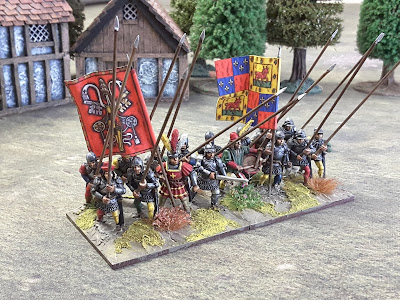 Middle ranks have a slightly lowered poke and we have another Borgia Papal flag this time in Red and then a Family Flag. The eagle eyed will notice I have placed the flags in the rear at the top of pike and then reduced the size of the flag pole in the middle ranks so that all four flags are visible from the front. 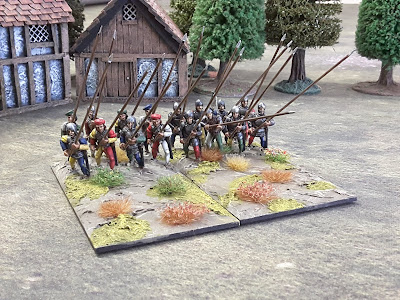 Front ranks on the extended bases I used on the other block although TAG don't do levelled pike figures these are around 45 degrees. I have been quite loose with the clothing in the Block using mostly Red, Blue, Green, Yellow and White as per the flags. 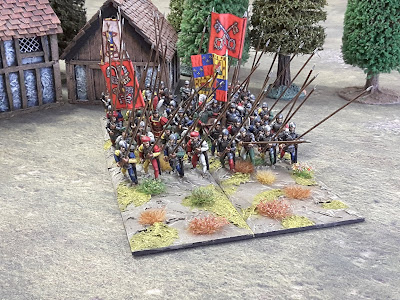 Points wise I have 48 28mm figures at 5pts each for 240 with 4 flags making 244 points for both the main total and the Renaissance Side Duel. This is definitely my last pike block of the challenge and with the one I had from before that now makes three for my Italian Wars project. I haven't got an accompanying Shot unit yet. 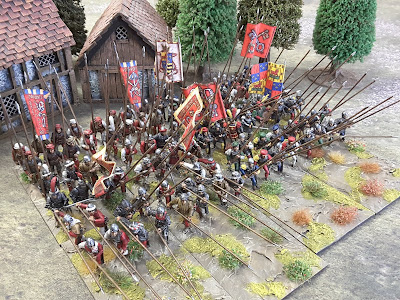 Here's a pic of the challenge blocks side by side, I am posting this on Sunday and hope to have a Cavalry unit done for Tuesday as well.

Jaw dropping work Ken. The first Pike block you did was awesome but doing another is just mind blowing.  It can be tricky moving from one manufacturer to another. Aside from the inevitable scale creep, there's usually a difference in style of sculpting that can stand out. These don't look too bad together in that comparison shot.

As before I'm awarding some bonus points both for the quality of this entry and the shear audacity of it! Along with the points for the flags that brings this entry up to 250 points.
Lee
Posted by Yarkshire Gamer at 9:00 am