Many different items on the desk at different stages of completion have lead to me not actually getting anything finished of late. However, Obergruppenführer Lee has been cracking the whip, and it is clear I have been letting the Tuesday club down through failure to provide adequate green painted motorised transport.

This weeks entry there for consists of 6 x Morris CDSW Bofors Gun Tractors. These will bear a striking similarity to the wrecker truck I finished a while ago, as they are the same chassis. 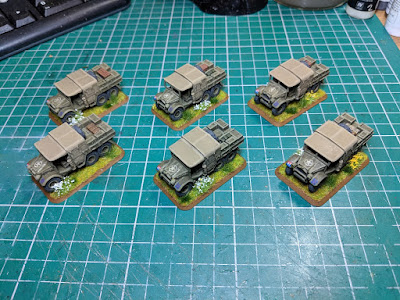 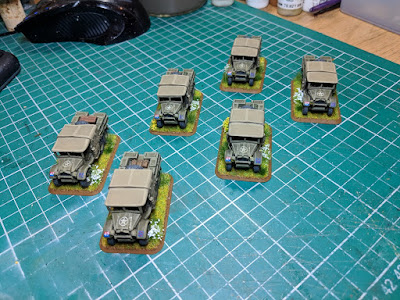 These are 15mm models from Battlefront and as far as £££ per unit goes, this is a pretty expensive batch of trucks that will probably never see the table! Each one has a driver figure, and they are now marked up for the 40th Light Anti Aircraft Regiment, Royal Artillery - part of 51st Highland Division (in Normandy). Vehicles have been tarted up a little by the addition of some stowage in the rear cargo area.

I say now marked up, as my first picture made me realise that I had the wrong AoS markings on them for some reason. This gross error had to be corrected, hence one of the decals looks a little unweathered. One of those mistakes I have no idea how I made - I suspect I used an armoured regiments AA unit's AoS numbers...

Anyway - the purpose of these trucks was to tow the 40mm Bofors guns of the regiment. My battery is now complete (as per the picture), as per the v3 rules (for v4 of the rules, the command team and jeep are now surplus). 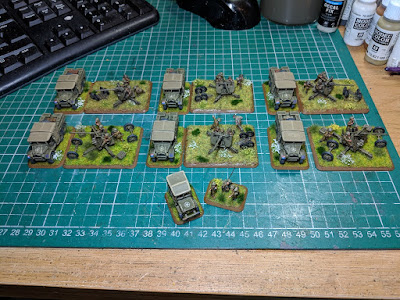 
Who told you about my whip?!?! Nice to see you back in the fold, James. This is a nice troop of workmanlike vehicles you have for us. I have to agree on the price of the Battlefront stuff, some of their army lists must require a second mortgage! (I should know, been there and done that!!). Having said that the quality of these models is excellent and you have made an excellent job of painting them up. And Kudos to the attention to detail adding more stowage and changing the decals. I'm throwing in a couple of bonus points for that, bringing this lot up to a tidy 62 points.
Lee
Posted by James MacCraggs at 8:00 am