For last years challenge my first opening salvo was Death dressed in a Santa costume (it makes sense if you’re a fan of Terry Pratchett’s Discworld novels). Almost a year later, my first entry will be Death’s servant, Alberto Malich the Wise dressed as an Elf from the novel ‘Hogfather’. Mixed with the satisfaction of getting my first runs on the board, is a touch of shame it took nearly a year to get paint on him. Though to be fair, like a lot of us, I have an uncounted collection of much older unpainted minis... 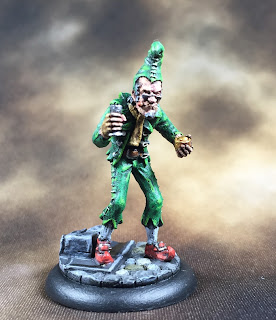 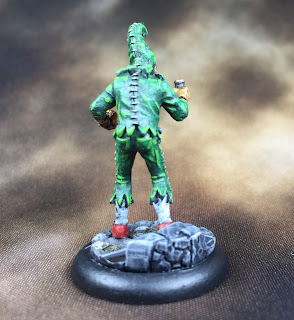 Alberto is a powerful wizard, who through an aborted attempt to stave off death (he had a few people he wanted to put off meeting in the after-life) ended up as Death’s servant in exchange for hitting the pause button on his life-timer. The model is a 28 mm figure from Micro Art Studio’s Discworld range. I’ve been a huge fan of the Discworld series since I read my first book over 20 years ago, and in my mind at least, I think the miniatures really capture the spirit of the characters. 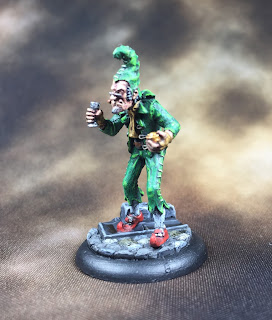 So here is a fitting model for the festive season, even if he isn’t feeling the Christmas spirit himself.

Happy Christmas to all, and to all a good night!

Brilliant work Stephen. I really like the mottled green of his trousers and tunic and the work you did on his face is superb. I also like how his red shoes tie in with Death's festive robe - well done. I've never read the Discworld series (it was so much of the 'it' series at the time that I naturally (for me anyway) rebelled against picking it up), but maybe I should give it a try. Who knows, you may have a convert. ;)