If you look on the WSS blog and you go way, waaaaay back, you might run into a series of blogs called "Project Platoon". Christy did well, but if I recall correctly, Guy and I didn't really finish with flying colours. I'd committed to building a British Airborne platoon and quickly collected bought most of the available Foundry and Warlord Games packs. Somehow, that part always goes quickly and easily... 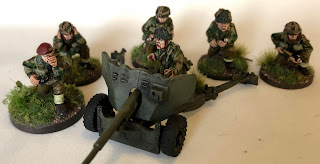 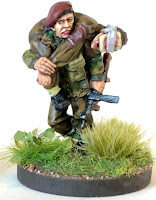 I have since completed a full platoon for Chain of Command with some support choices. But a few packs (okay, there might be enough spares for nearly another platoon, I admit it) remained unpainted in a box. Until late January of this year, that is. Again, PolderCon proves to be an excellent accelerator. For our scenario, the Border troops in our scenario needed a 6pdr Anti tank gun, a medic and - at the very last minute - a PIAT Hero (see WSS 107 for what he can do).

I needed five crew and a commander for my A/T crew, and Warlord only supplies two of the former, so I added two crew from the Crusader version (I bought both, see below...) and a 'hear no evil'-para from the 3" mortar crew. 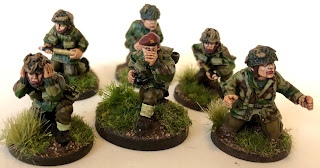 It required only a second's thought to come up with the right figure for the PIAT Hero. Wargames Foundry 'British Paratrooper Command' includes a figure running with his PIAT, an MP40 slung across his shoulder, a determined look on his face. He just needed painting, having been undercoated somewhere back in the Dark Ages. 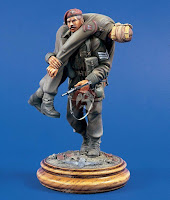 The medic I have painted before. Sort of. I remember this pose from, originally, a Chota Sahib 54mm miniature I saw in the pages of Military Modelling. Then Verlinden produced a version in 120mm which I built in the early 90s (photo is not my version!). Considering how rare the pose is, I find it hard to imagine it didn't reside in some part of Paul Hicks' brain when he sculpted this figure. Arguably though, his is by far the best version. It's a very well designed figure. Not the most useful perhaps, but I like him better than the 'official' medic in the Warlord Games range. 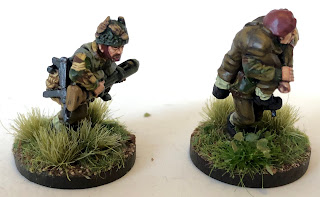 The gun, finally, is the Warlord specimen. I have half a mind to pull it apart and replace the tiny wheels with the ones from the Crusader miniatures version (which is lacking in other Airborne 6pdr features). My relationship with the Airborne Museum started when I was 15 or so and asked to be allowed into their 6pdr diorama to take measurements of the gun. They kindly obliged and that trip, together with another session to the then still unrestored 6pdr at Heelsum, allowed me to draw up a set of drawings that gave me a very anal understanding of the piece. So, must do better. But for now, it'll suffice to get my Paras onto Hawkins' Hill, I think. 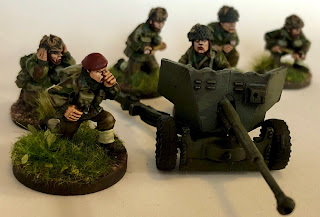 ***
Great work Jasper - the British paras of WW2 are always a formidable hobby obstacle, what with their bonkers camouflage patterns - to say nothing, apparently, of various issues with the model 6pdr AT guns out there now? :)

I am trying to count up the figures in this submission, and I think you have eight of them (plus a wounded fellow) and the AT gun - that works out to 52.5 points, but we all know that decimals steal food from starving children, so I'll round that up to 53 - and toss in 30 for the location (thanks to Tamsin for the reminder).  Nice work.

GregB
Posted by Praefectusclassis at 12:00 pm