From DaveD - In the service of the Queen Empress (12 points)

The column had barely stopped when Corporal Millsy appeared , an eager look on his face and his trusty shovel in hand. "Sir" he said to Major Docherty , "shall I get started now?" It was a question the Surgeon Major was very familiar with in the long days since he had first rescued the man from the "Thugees of Indoostan".

Corporal Millsy had been part of a patrol which had been ambushed by the Thugees.  Millsy was strangely the only survivor, and he had been led into captivity by being taken up the Kyhber Pass, more than once it was rumoured.

The brave Major was on a recce mission across the Hindu Kush, when the Raja of Bungditin released the dejected Millsy into his care. It seems the Thugees could no longer tolerate the whining and whimpering and wishing to curry favour - rather than just Curry Millsy - with the brave Major, the representative of the Great Queen Empress.

Ever since then Millsy had made himself the Major's personal manservant or batman. It was his duty to serve his officer. He often dreamt of being a proper officer - just like Major Docherty. The only thing that Corporal Millsy would never take orders on was to change his Scarlet tunic... "hey , hey calm down" he would mutter in his thick scouse accent. "I am not wearing blue!". It was a small price to pay in overlooking that foible as otherwise the man was devoted to his officer. 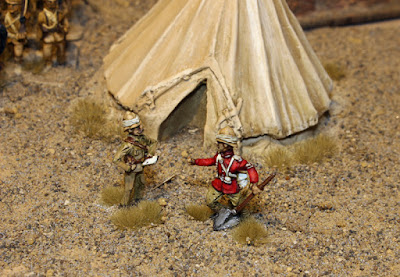 "Shall I start now sir? It won't take me long. I have plenty of practice as you know sir. I have been doing this so long now I have written a book sir. Even had it published when we were back in London when you were invited to tell of your adventures rescuing me to the Queen. It will make my fortune. Can I show you it? It has everything I have ever learnt about latrines, sir, pictures and everything.  Sir please take a look here"  he said imploringly as he handed his magnum opus over.

The Major took the tome in hand, it certainly was a thorough piece of work.

"Very good Corporal Millsy."  But I think you may need to change the  title... 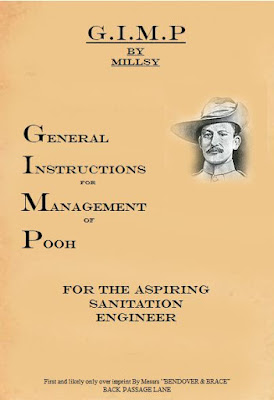 "Sir! " "Very good sir!" .... A short while later, amidst the sounds of grunting and much whirling of the the shovel . "Finished Sir!" 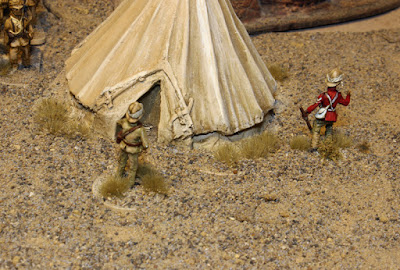 The Major looked over to see the proud Corporal stood with a huge beaming smile on his face. Another latrine successfully constructed for his officer. Excellent thought the Major,  now where is Private Clint with the paper?

As the  Major set about his business...his thoughts drifted. He wondered if there would be any stocks of "5D" or "mind bleach" when they got to Khartoum. It was rumoured his doughty sister was there she would no doubt have some, unless some cheeky (paint) monkey had been interfering.

Haha! Very good Dave. I have to say the part of the story which recounts poor Corporal Millsy 'being taken up the Khyber Pass, more than once it is rumoured' made me wince a bit.  I have a sense that these entries will be a continuing conversation across the hemispheres.

I very much look forward to the continuing saga of Major Dochery and Corporal Millsy. :)