I’ve painted a Warlord resin 234/2 (Puma) in a previous challenge, but I just love these giant German reconnaissance vehicles, here to sniff out (or set) ambushes! So I made another. They were, of course, only made in small numbers in 1944 and 1945, which doesn’t stop any wargamer wanting to field a bunch of them. 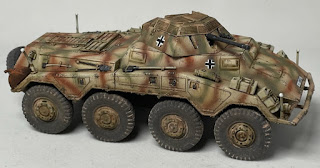 Unlike that previous model, this is the Warlord plastic 234/2 Puma, which I have wanted to convert into the /1 version with the 20mm turret. As it happens, that turret is exactly the same as the one on the 250/9 Neu, and Rubicon makes a conversion set. The space for the turret ring is slightly too small on the Warlord model, but only by 1mm or so. Nothing that can’t be fixed by some judicious application of a file.

The original Puma turret is entirely unaffected by all this, though a strip of plastic around its ring insert helps it sit better in the ‘reamed’ ring. In all, I figure this is one Caprica bonus, plus one 1/56 vehicle and a few points for the extra turret? 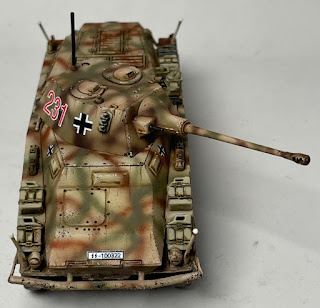 Well that's the second cracking camo scheme of the day . There is always something about these big armoured cars. I have gone with 5 for the extra turret for you . always good to have options . Great job Jasper.